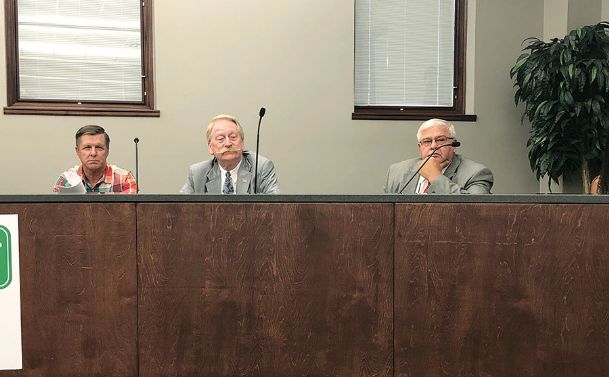 Lowndes County School District Board President Robert Barksdale, left, Board Attorney Jeff Smith and Superintendent Lynn Wright listen to New Hope Elementary School teachers voice their complaints about the board's decision to move two administrators to previously-held positions. During the meeting, a board member accused Wright of attempting to hold the vocational director job open for himself if he isn't appointed superintendent in December. Photo by: Amanda Lien/Dispatch Staff

During a special-call school board meeting Tuesday night, board member Brian Clark called out Wright for leaving open the position of district level vocational director, which oversees LCSD's Career Technology Center, so Wright could take the job if he is not hired as superintendent at the end of the year.

"(The other applicants) were not looked at because Mr. Wright was holding the job for himself if he does not become superintendent," Clark said at the board table Tuesday.

Wright has served as a publicly elected superintendent for almost eight years, with his second four-year term expiring Dec. 31. The Legislature has done away with elected county superintendents, meaning the position will become a board-appointed job in January. LCSD has advertised for superintendent applicants, and Wright has applied for rehiring.

Failing that, however, Wright told The Dispatch he plans to apply for the vocational director job.

"I've said that a few times," Wright told The Dispatch. "But they (board members) told me once that as long as test scores are good, I don't have anything to worry about (in being rehired as superintendent). I hope they remember that."

While LCSD's test scores continue to be among the strongest in the region -- the district is a few points shy of an A accountability rating from Mississippi Department of Education -- budget woes have potentially hurt Wright's standing with the board.

Since 2014, in spite of increased revenue, the district has seen its operating fund balance decline by about $13 million.

Clark's accusation Tuesday came during a discussion between Wright and board members over Wright's moving other administrators to different positions without the board's authority.

During an executive session after the board's regular meeting last week, board members voted to reverse two non-lateral moves Wright made within the district that allowed for former curriculum coordinator Susan Lingle-McClelland to take the interim district level vocational director position. Lingle-McClelland will still hold that position until December.

After former Vocational Director Percy Lee retired last spring, the district posted a job listing to replace him. The district received 34 applications for the position, but none of them interviewed. Wright said he spoke with the board about the vacant position in April, around the same time board members were preparing to begin the district's superintendent search.

"I said, 'I need to know something,'" Wright told The Dispatch. "'Because if y'all do not want me as superintendent ... I could appoint myself to the Career Tech position and put someone there as an interim.' At that time, we had about 34 applicants for the job but we didn't interview anyone because almost everybody was already under contract somewhere else by the time we could've done interviews."

The board voted to reverse both of those moves because they were not lateral moves, and per state law a school district superintendent can only make lateral appointments within the district without the board's authority.

Additionally, Clark said, the district could further cut costs by returning Carlisle and Adams to their previous positions and eliminating the curriculum coordinator position, passing those duties to Personnel Director Veronica Hill and the office of Deputy Superintendent Robin Ballard. Since LCSD Business Officer Kenneth Hughes has repeatedly told the board the only place to cut costs -- thus helping to salvage a district fund balance LCSD has requested a tax increase to help restore -- is personnel, Clark reasoned it would be wise to look at administrative positions to see if cutting any of those would save the district money.

"We've cut teaching positions in the district but none at Central Office," Clark said, referencing the 62 first-year teaching positions eliminated in March to cut costs. "So that's the way I was coming at it. ... This is an opportunity to cut costs, at least for six months, and see if we can help our budget."

'It's nothing against them'

Clark and board member Jane Kilgore, who both voted along with Jacqueline Gray to reverse Wright's administrative appointments, defended the board's decision after nearly two dozen NHES teachers and parents accused them of only reversing the appointments out of animosity toward Wright.

The teachers had come to the special-call meeting specifically to ask board members why they voted to put Carlisle back at CES and Adams at NHES and to voice their frustration with the decision. For almost an hour, they pleaded with board members, sometimes through tears, to return Carlisle to NHES and Adams to her district-level position. They said they want to see Carlisle and Adams reinstated because of the difference they made in their previous positions.

"It's like this," said fourth grade NHES teacher Michelle Brown, speaking to the LCSD board. "Why would you take Christy Adams, who turned (NHES) from a C-rated school to an A-rated school, and not put her at the district level where she can affect every school like that? And our kids at New Hope, they need to see a man in the halls. That's what Mr. Carlisle did. ... He knew every kid by name. They listened to him. They respected him. And now they won't have that. ... And right now we don't know who we're answering to. That kind of instability keeps us from doing our jobs. You might not be in the schools with us, but these are our babies. So we care about this a lot."