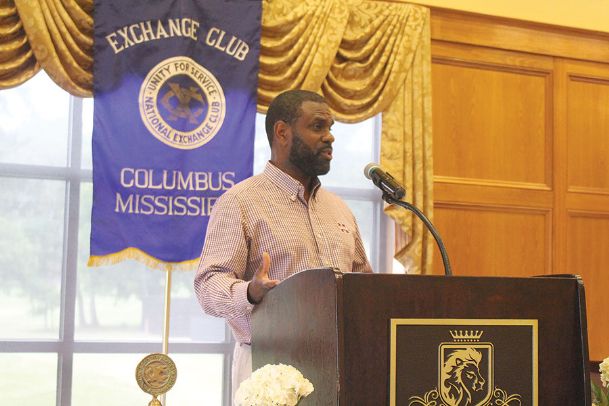 Darren Leach, pastor of Genesis Church, speaks to Columbus Exchange Club about his church's multipurpose service facility, The Dream Center, at Lion Hills Center on Thursday. Leach told Exchange members about the building's purpose and asked them to consider volunteering with one of the Center's programs. Photo by: Amanda Lien/Dispatch Staff

More than 10 years ago, Genesis Church purchased the old Hughes Elementary School building on 23rd Street North. Pastor Darren Leach took possession of the keys, still unsure as to the condition of the building, but believing in God's plan and prompting.

Now, what was once a school is set to soon become the Dream Center, a multipurpose facility modeled after a similar building in Los Angeles, California. Genesis Church and volunteers throughout the community are in the process of raising funds to complete renovation on the building so the community has a central location for a "one-stop shop" for a variety of outreach and ministry programs, Leach told Columbus Exchange Club members during Thursday's meeting.

"It's not about religion. We're not going to preach to people that come in the door if they don't believe what we believe," Leach was quick to say. "But we are approaching this like servants of God."

The church still needs about $20,000 to complete the building's renovations, but Leach said he didn't come to Exchange to fundraise. He came to make members aware of the Dream Center's existence, and to ask that they begin "thinking and praying" about if, and how, they could volunteer.

"I believe that right now, in this city, God has organized just enough chaos so we can see what we can do to help," he said. "I always say that this is about access, not ownership. We are providing access to job training, discipleship, after-school programs. We don't own our talents, but we're trying to use them all to the best of our ability to bless our community. And that's where the community comes in."

Eventually, Leach said, there are plans to put a residential Christian discipleship program in place for individuals exiting rehabilitation centers such as The Pines and Cady Hill Recovery Center.

"It's not about serving just one need, but it's about making the Dream Center kind of like a Walmart," Leach said. "It's a place where people can go and get job training and care for their kids and spiritual nourishment. That's what we're trying to accomplish there."

There isn't yet a reliable timeline for when the actual Dream Center building will open because completion of construction is contingent on donations, Leach said. However, he hopes to continue volunteer-based programs like the block cleanup and after-school meal programs out of Genesis Church. He encouraged Exchange members to consider how they, their families or their businesses could help.

"I'm a Christian, and so I believe when God puts an opportunity in front of you, you act on it," he said. "I had the opportunity to speak on what God is doing at the Dream Center, so here I am. And maybe this has placed an opportunity before you."