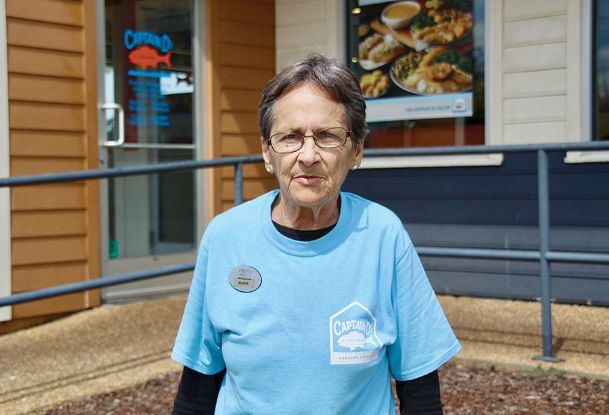 Maria Sanders, 77, has worked at Captain D's, off Highway 45, for nearly 30 years. A native of New York, New York, Sanders came to Columbus to be with her then-husband around the late 1960s after serving as an Army cook at Fort Bend in Georgia. Photo by: Victoria Cheyne/Dispatch Staff

On Sunday, Maria Sanders stood behind the counter at Captain D's in Columbus waiting for trays of fish filets to come up from the kitchen.

She ambled around the restaurant delivering them to tables, reading receipts through her wide-set rectangular wire frames smiling at customers.

The moment she opens her mouth and speaks in a low raspy voice, with an indelible Northern accent, one realizes she's not from around here.

From her upbringing, Sanders recalled trips with her dad to Coney Island and The Bronx Zoo, just a walk from her family's apartment in the Parkside Place neighborhood, and weekends and holidays spent working in her tough Italian grandmother's grocery store.

Sanders remembered a time when she and a friend went ice skating in Central Park and spent all their money, so they didn't have a way to get back home.

After trekking from 59th Street to 110th Street, from one end of the park to the other, the girls stopped a police officer, who kindly drove them to the subway and paid for their fares home.

"Yeah, I remember doing that, oh boy," Sanders said, shaking her head of trim grey hair. "It was a nightmare."

It wasn't until after she served in the Army as a cook that she moved to Columbus to be with her then-husband, around the late 1960s.

In Mississippi, Sanders said she experienced culture shock, even after being stationed Alabama, Virginia and Georgia, at Fort McClellan, Fort Lee and Fort Bend, respectively. The area was segregated. It also lacked the public transportation she was accustomed to, so she had to learn to drive a car.

"I felt like I was on another planet when I came here," Sanders said.

But now it feels like home. During her last trip to visit family in New York, she said she couldn't wait to come back to Columbus.

"The place got so crowded ... but I still know how to get around," Sanders said. "I said, 'I'm excited to get back to the South.'"

Even if she's still a northerner at heart, who speaks with a thick accent and admittedly doesn't smile in photos, she emanates southern hospitality in the restaurant.

On Sunday, she told her customers to enjoy their meals as she set down each tray of food and said, "you're welcome, honey," to those who thanked her.

She said she loves seeing her regular customers at the restaurant. They are the reason she's stayed around for so long, and she misses them when she's away.

"I don't want to stay at home and do nothing," Sanders said. "I want to go to work and see my customer friends."

They lovingly call her "Old Marie," her mother's name, she said, or Grandma.

"I've been here a long time, and they all know me," Sanders said.

In the parking lot, a woman saw Sanders and asked how long she's worked at Captain D's. After Sanders responded, the woman, now 45-year-old Tanya Andrews, who came to the restaurant for lunch with a car full of children, said she remembers seeing Sanders at the counter when she would eat meals there with her parents as a little girl.

"The lady's still working here," Andrews said. "It's good to see you. It's a blessing you're still here."