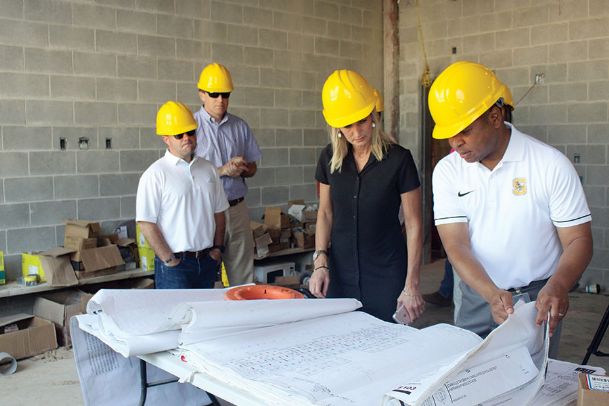 SOCSD board members and administration stand inside what will eventually become the Partnership Schoolâs gymnasium. Construction on the $30 million building is expected to be completed in time for the 2020-21 school year.
Photo by: Amanda Lien/Dispatch Staff

Despite more than a year and a half of delays, Starkville-Oktibbeha Consolidated School District plans to open its Partnership School with Mississippi State University in time for the 2020-21 school year.

SOCSD Superintendent Eddie Peasant, current Armstrong Middle School Principal Julie Kennedy -- who will lead the Partnership School when it opens -- SOCSD board members and future Partnership School administration toured the building on MSU's campus Friday morning. The $30 million, 123,000-square-foot building will house sixth and seventh graders -- which are currently taught at AMS -- in the more than 60 classrooms currently being constructed.

"At this point, the incoming sixth and seventh grade classes that'll start here in 2020 total somewhere between 850 and 900 students," Kennedy told The Dispatch. "And that's just what we have for enrollment right now. So we're preparing for a full building our first year."

Although the building is not yet complete, enough progress on the framework has been made that board members and administration could see the outlines of classrooms, restrooms and administrative spaces during Friday's tour. Once the Partnership School is complete, the campus will also host space for MSU's College of Education, where MSU students can observe classroom teaching and university faculty can be a resource for SOCSD teachers and administrators.

To facilitate MSU student observation, Peasant explained the classrooms have been set up in "pods" of four, sorted by subject, and will all be connected to a fifth room where MSU students can observe teachers and students.

"Each classroom in a pod will be set up for a specific subject -- math, history, computers, whatever -- and they'll have glass walls with shades that can be pulled down," he said. "We wanted to make it observation-friendly so students can see in, and they can also listen in with their own headphones."

As the tour moved through halls that, for now, are still without walls, Kennedy explained that most classrooms will have desks that can adapt to however a student prefers to sit, write and work without being disruptive to those around them. It's a small thing that she thinks will make a big difference in helping middle-schoolers learn.

"They can't roll the desks around, but they can adjust the chair how they want and move the desk surface around to be comfortable," she said. "If that eliminates distractions, especially for this age group, then it's one less thing working against them in a classroom."

'Taxpayers will be pleased'

It has been a long, weather-worn road for the Partnership School since SOCSD and MSU first announced plans for the campus in 2015 and broke ground the following year.

Construction first ran into trouble in August 2017 when weather concerns, primarily Hurricane Harvey, drove up the cost of construction materials, causing an overall increase of about $2 million and resulting in the district revising its completion timeline from November 2018 to March of this year. Peasant told The Dispatch he now hopes construction will be complete in the spring of 2020.

The original projected cost was $27.5 million. When SOCSD board accepted a bid from Columbus-based West Brothers Construction in December 2017, the full cost of construction became $29,908,401, an amount Peasant said was still accurate during Friday's tour.

In February, Peasant told The Dispatch that additional weather delays had pushed construction completion to the end of the year. He confirmed to The Dispatch last month and again on Friday that the Partnership School would open in August 2020.

"We're very pleased with the progress, especially considering the weather we kept encountering," Peasant told The Dispatch Friday. "We feel like West Brothers is doing a great job here. I think there's a lot of thought that has gone into the building and I think taxpayers will be pleased with the final product."

The school is being paid for with a $16 million bond, a $10 million allocation from the Legislature and additional cash and land donations from MSU.

Wesley Gordon, SOCSD's newest board member, who was elected earlier this month to fill the unexpired term of Lee Brand, told The Dispatch he was "excited" to see the building's progress.

"I've been keeping up with what's going on with the weather setbacks and everything, so I'm really looking forward to seeing the building finally open," he said. "And hopefully no more delays."

Gordon, whose four children will, at one point, attend the Partnership School, says he believes the community will benefit "tremendously" from the new building.

"This partnership with MSU and SOCSD is a new education model for the state, and I'm really excited to see the impact of that," he said. "Not just for my kids, but for kids in the future, and for the future teachers that get to learn from this building and hopefully go to classrooms of their own. It's really exciting."