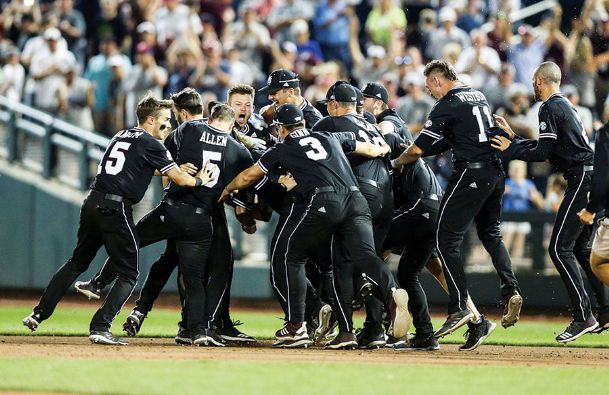 Mississippi State celebrates its come-from-behind victory over Auburn in its College World Series opener Sunday. The Bulldogs won 5-4 and will play Tuesday against Vanderbilt. Photo by: Courtesy photo/Mississippi State Athletics 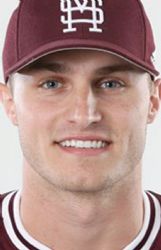 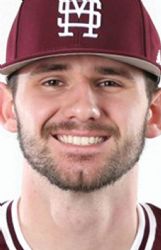 OMAHA, Neb. -- Baseball is a game of superstition.

Senior center fielder Jake Mangum is chief among those players who believe in such things.

With a 9-0 record in the all-black "Nickelblack" uniforms entering the College World Series, Mangum pleaded with redshirt junior and Game 1 starter Ethan Small to don the jerseys Sunday.

Small, who as starting pitcher had the honor of choosing the team's game jerseys, was hesitant. Traditionally a Friday starter, he always reverted to the Maroon '85s top. It had worked pretty well. MSU is 14-4 in those games.

Pressured by Mangum and others, Small relented.

Sunday, the shiny magic of the Nickelblack uniforms looked as though it had worn. For eight innings, the Bulldogs labored through varying missed opportunities, trailing 4-1 headed to the bottom of the ninth inning.

In both the fifth and sixth innings, MSU loaded the bases but came away with only one run in those situations. On the night, the Bulldogs left 11 runners on base.

Following a five-inning outing where Small allowed three runs off three hits and struck out eight, the Southeastern Conference Pitcher of the Year sat in the dugout resenting Mangum for his choice of the hallowed black tops.

"To be honest, I really didn't want to do it," Small conceded. "And for about eight-and-a-half innings, I really hated Jake Mangum."

For three hours, 23 minutes the "Nickelblack" jerseys were for naught -- until suddenly, it seems, whatever magic they had started working.

Mangum opened the bottom of the ninth with a double off the right field wall.

Senior Elijah MacNamee then stepped to the dish as the tying run. He doubled down the left field line, scoring Mangum and making it 4-2.

"I go up there and I say, 'This is no different than when I was 8 years old,'" MacNamee said. "I have my ups and downs, but who doesn't? (I do) whatever I can do to help this team win."

Stepping three times and incorporating a quick shuffle, he disregarded an opportunity to tag MacNamee heading toward third and fired to first base for what would be the final play of the game -- or so he thought.

As the ball crossed the diamond at TD Ameritrade Park it soared high above first baseman Rankin Woley and rolled toward the Auburn dugout. MacNamee rounded third and headed for home -- scoring the tying run. Skelton stood on second after he advanced on the error.

Two batters later, senior Marshall Gilbert delivered a walk-off single up the middle to give MSU a 5-4 win.

The Nickelblack jerseys had spoken and remain undefeated.