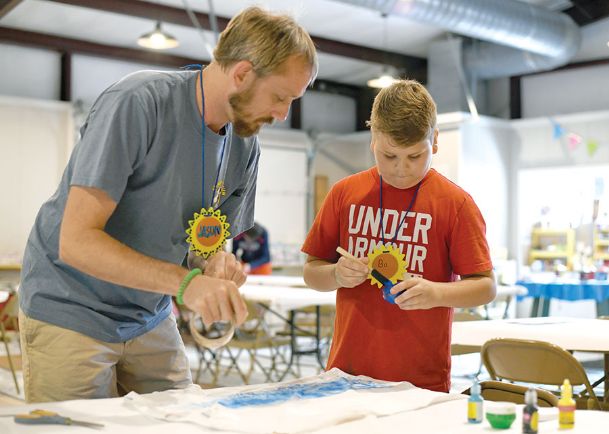 Camp Rising Sun counselor Jason Kirkland helps camper Bo Carter tape his T-shirt to a table so it won't move while he paints it Tuesday. Kirkland has been coming to camp since it began in 1987. "It's more or less like family here," he said. Photo by: Jennifer Mosbrucker/Dispatch Staff

Camp Rising Sun counselor Audrey McClung, 18, laughs during lunch on Tuesday. This is McClung's first year as a camp counselor. Her grandmother has been in charge of arts and crafts at camp for the last five years, and spent 15 summers prior in the cabins with campers.
Photo by: Jennifer Mosbrucker/Dispatch Staff

Reilly Pittman, 12, creates a "leaning tower of Oreo" at lunch on Tuesday at Camp Rising Sun. "It's an explosion of flavors," Pittman said. "You can taste lemon, but also chocolate." It is his first year at camp.
Photo by: Jennifer Mosbrucker/Dispatch Staff

Will Pate had to look at the quilt on display in Camp Rising Sun's mess hall to make sure he recalled the correct year he started attending the camp.

The quilt, which displays squares made out of the camp's yearly T-shirt, is a kind of calendar for Pate. He has worn nearly every one of those shirts as either a camper or a counselor.

"It's been since 2005," he remembered. "The time goes so fast, but it also seems like forever ago. I've only missed one year, too."

Pate first attended camp at age 9 with a friend who had been diagnosed with cancer. He didn't realize then that he would want to come back every year since, as a camper until age 16 and then as a counselor. For some young people, working for a week straight in the June heat isn't ideal, but Pate can't imagine anything else.

The weeklong camp is specifically for children from Mississippi, Alabama and Tennessee who have been diagnosed with or are in remission from cancer.

Donations and contributions from civic groups, businesses and private citizens keep the lights on, and everything from the kitchen to the cabins is staffed by volunteers. It's just like a regular camp, with the kids trying their hands at archery, horseback riding, water sports and arts and crafts. All have the chance to be treated just like any other kid at summer camp, which is what keeps Pate coming back.

"I very quickly fell in love with everyone here," he said. "No matter what limitations kids have and how they might be different from other people, they have a place here. ... And for kids who know someone that have survived cancer or are fighting cancer, it's a place where they can feel supported too."

Pate, who just graduated from Columbia University in New York with his master's degree, is one of more than 100 volunteers that made the trip to Camp Rising Sun from as near as Columbus and Starkville and as far as Los Angeles, California, and San Antonio, Texas, to serve as cooks, activity coordinators and overnight counselors for the week. Past and present board members also come, not just to volunteer, but to see what the camp many of them have poured thousands of hours into over the years has become.

"It's just a wonderful place," said Susan Faulkner, a founding board member of Camp Rising Sun. "You can see a lot of the campers grow up right in front of you. You get to see the way they grow up. That's probably one of the best parts."

Although Faulkner now lives in Birmingham, Alabama, she still tries to make the yearly trip back to Columbus to see faces old and new and watch generations of kids grow and change. But next year, and for all the years after, she, along with volunteers and campers, will need to travel elsewhere.

"After the YMCA sold the land last year, the new owner decided he wanted to make some changes that weren't going to be conducive to having camp here," she said. "So we will be looking for a new location.

"A lot of people are asking if this is the end," she added. "It's not the end. It's just a transition."

The YMCA owned the Camp Pratt property since at least the 1950s and began hosting Camp Rising Sun in 1987. Columbus business owner Ron Harper purchased the 70-acre property in January 2018.

The Camp Rising Sun board has "considered several possibilities" of future locations near to Columbus where future camps could be held, but wants to wait until this camp ends before doing any legwork, Kizer said.

"We've talked about land just over the state line, maybe finding land that's ours," she said. "We'll definitely be speaking with the county and the community."

"The camp will continue," said Faulkner. "That's no doubt at all. It's just the beginning of a new chapter."

No matter where Camp Rising Sun moves, volunteer camp counselor Carl Miller will follow. Miller, who started volunteering when he was stationed at the Columbus Air Force, has made the yearly journey to Camp Pratt from Washington, D.C., San Antonio and Afghanistan.

"There was one time I was deployed that I couldn't make it back, but I've been able to make my deployment calendar so I can come back every other time," he said. "I just got back from Afghanistan two weeks ago, stopped off where I'm stationed in San Antonio and came here."

Some of Miller's family members have had cancer, he said, so he was able to find common ground with campers quickly. It's something he values no matter where he is.

"This is family for me," he said. "The most wonderful group of people to be around. You can put aside whatever may be going on in a kid's life. There's nothing better than that.

"Sure, it's going to be hard to leave this place," he added. "But the kids are what matter. Anywhere I am, this is where I'll be every June."