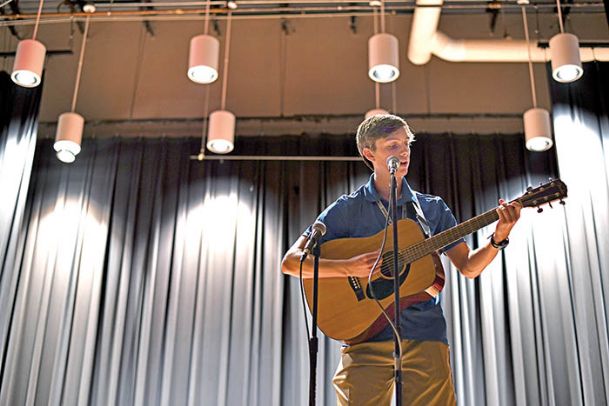 Cade Meyers, 17, performs during the Mississippi Governorâs School talent show on Monday at Mississippi University for Womenâs Parkinson Hall. Meyers is from Biloxi and began playing the guitar two years ago. âI love it because itâs a great skill to have. Itâs better than playing video games all the time,â Meyers said. Photo by: Jennifer Mosbrucker/Dispatch Staff

Dakiriyah Doss, 15, said she didn't know when she applied to Mississippi Governor's School that she would be helping her fellow classmates at Columbus High School.

The rising CHS junior arrived at Mississippi University for Women ready to enroll in an academic adventure specifically for honors students from Mississippi, knowing she would perform community services, but not how. The 59 MGS scholars spent Saturday morning cleaning up Union Academy, a previously shuttered school Columbus Municipal School District will use as the alternative school this coming fall. The alternative school was previously housed in Hunt Success Academy, which was partially destroyed after a Feb. 23 tornado, and then moved to one hallway in CHS.

"It was cool," Doss said. "... I believe by being in a bigger, cleaner building, I think it will lighten (the students') day and brighten their mood. I think it will help them a lot.

"We played music, to motivate everyone," she added. "The walls were orange. By the time we cleaned one section, it was white. It was so pretty. It made everyone happy that they were doing something to help others."

It was just one of the activities the MGS scholars have embarked on in the annual program, run by MUW's Department of Outreach and Innovation. Starting June 2 and continuing through this week, Doss has spent her days on MUW's campus studying entrepreneurship in the morning and taking the stage in Rent Auditorium to learn ballroom dancing in the afternoon.

"I like to dance but I don't know how to," Doss said. "When I'm dancing with people, I get to learn about them. It's an easy way to wake me up. After my major class I get really tired but once I start dancing, I wake right up."

MGS, which started in 1981, is a residential honors program designed to teach students from all over Mississippi in formal and informal settings with the goal of creating a state of leaders and scholars. The program is free for students, with the state Legislature providing funding. Melinda Lowe, first year director of MGS, said this year MGS has partnered with Owl Athletics to increase recreation for the scholars.

The two-week program is divided into two sessions, with scholars taking morning classes in an academic major such as psychology and entrepreneurship and afternoon classes in a more relaxed, fun "interest area," which includes ballroom dancing, mock trial and podcasting.

"It has been amazing," Lowe said. "The faculty and staff have worked so hard and because of their work, it's made it easier for me. The scholars are just amazing. They're like sponges, they are wanting to take everything in and make the best of these weeks. It's making for a great experience. My favorite has been just getting to know the scholars, getting to see their curiosity and see that grow even more. I've also had a lot of fun doing the ice breaker activities. I love seeing the teamwork, camaraderie and leadership growing."

Preston DiFatta, 16, of Ocean Springs, said the packed schedule of both academic and recreation activities has made him a "good kind of tired." Like Doss, DiFatta said meeting like-minded scholars has been the highlight of his summer experience.

Assistant Director Sean Walters remembers being a scholar back in 2000 and has worked with the program since 2006.

"Because these are gifted students, they often come from schools where no one is like them," Walters said. "This is their first chance sometimes to connect with kids that have a common interest. That's kind of what happened to me. It helped me take ownership of the fact that I was a smart kid. That that not only was OK, but that was a good thing. The main thing is we build a community of scholars across the state. From corner to corner, these kids meet people like them and those friendships last decades."

Scholars pick their academic and interest area classes. When DiFatta saw a class about revolutions and the musical "Hamilton," his decision was easy.

"The first half of the first week, we listened to the entirety of Hamilton," DiFatta said. "Now, we are designing a hypothetical utopia after the fourth industrial revolution has happened. Revolutions are super interesting to me. It's a really fun class."

For Doss, though she may be tired, this summer has been unlike any other.

"Out of all the programs I've been to, this has been the best by far," Doss said. "All the opportunities we get, most people don't look for opportunities to grow as leader. This one makes you grow and makes you want to improve Mississippi as a whole."