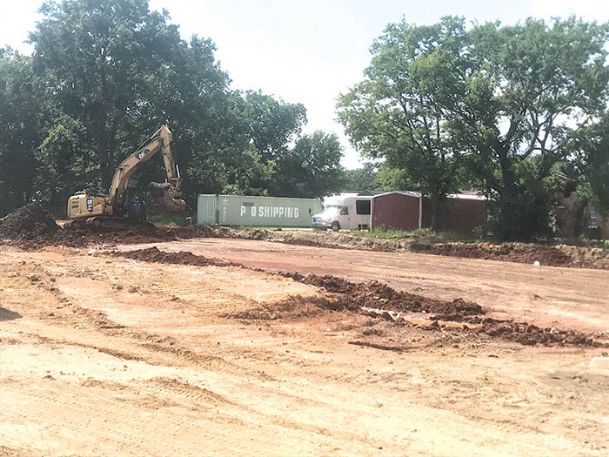 Crews from Lowndes County and the city of Columbus remove dirt from what will soon become the foundation of the new Sim Scott Park Community Center. The city is in the early stages of planning for a new roughly 9,000 square-foot building, which will house classrooms, recreation space and a senior center. Photo by: Amanda Lien/Dispatch Staff

Columbus and Lowndes County workers have begun laying the groundwork for a new building to replace the Sim Scott Community Center, which was destroyed during a Feb. 23 tornado that caused $9.3 million in damages to public property.

Although no construction can begin until the city hires an architect, a roughly 9,000 square-foot space on 20th Street North where the old senior center and classroom buildings sat has been steadily growing in size and depth as city and county road crews continue digging what will soon accommodate the center's foundation.

"We know how important this community center is to the community, especially in the summer," said city Public Information Officer Joe Dillon, who is also the city's hazard mitigation manager. "We wanted to make sure we could get something done there as soon as possible."

City Engineer Kevin Stafford told The Dispatch he, along with Mayor Robert Smith, Columbus Parks and Recreation Director Greg Lewis and other associates at city engineering services provider Neel-Schaffer, began drawing up plans for the "ideal" community center last month. They include classrooms with concrete-enforced walls, a brick facade on the wall facing 20th Street and a canopy shading the entrances.

"It'll look much better than the original community center and enhance (Sim Scott) park," Stafford said. "We've been able to start with a clean slate, which will be able to serve the community much better. ... We're essentially putting back what's lost."

City councilmen voted in May to advertise for proposals of professional services for the design of the new center. Stafford said he expects to recommend to councilmen by the first council meeting in July. Once they vote to select an architect, Stafford estimates it will take roughly six to nine months to complete the building.

"Once we finish digging where the foundation will be, we're kind of in a holding pattern," Stafford said. "But since that's already done, that's one less thing to do."

Dillon, who currently acts as a liaison between the city and the Federal Emergency Management Agency in all matters pertaining to recovery from the Feb. 23 tornado and subsequent flooding, told The Dispatch the money to rebuild the center would come from the city's insurance claim and possibly some FEMA aid. If construction is documented correctly, Dillon said FEMA may be able to reimburse the city for 75 percent of what insurance doesn't cover.

"We've already started the paperwork," he said. "It's a lot to cover and it's very detailed, but we'll be in touch with FEMA to make sure we can apply for that 75-percent reimbursement."

It is difficult to estimate the cost of construction, Stafford said, since a lot of it will depend on how the architect suggests they proceed with construction.

"Some (architects) bid out in packages," he added. "So they'll ask for a separate bid package for the slab, another for the interior work and so forth. It depends on what they think is best."

Although the building's exterior will still be metal, Stafford said the current plans specify classrooms with concrete walls that will provide a safe shelter in case of inclement weather.

"It'll provide a little peace of mind for people," Stafford said. "... Knowing that if something happens, there are a couple classrooms with concrete walls that will be more secure than would normally be in a metal building."

No matter how well-laid the plans, whatever architect the city hires could change the blueprints based on anything from code issues to fire safety requirements, Stafford said. However, it is beneficial to both the city and the architect that they have drawn-up plans beforehand.

"Most of the time, you start from scratch and you sit down with an architecture firm and they ask what you want and you go from there," he said. "We already have an idea that they can look at and build from. ... But no matter what the plans end up looking like, the foundation (of the building) is going to be the same, so we started digging for that."

City and county workers have been collaborating to remove old dirt from the site and replace it with red clay. Stafford said that clay won't damage the building's new foundation, something that was a concern with the old soil.

"We're really grateful to the county for helping us out with this," Dillon said. "It's been about 75 truckloads of dirt going either way, and we're thankful they were willing to help us out."

The city has also replaced the fencing around the ballpark at Sim Scott Park and has removed damaged light poles, Dillon said.

"The city knows the importance of that park to this area," he said. "So we really wanted to make it a priority."