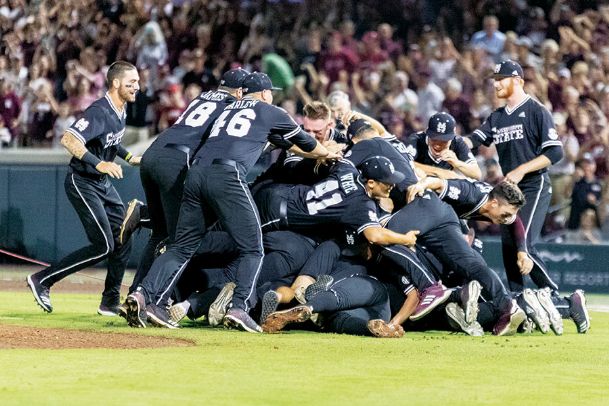 Mississippi State University baseball players celebrate after beating Stanford in the Starkville Super Regional on Sunday. The Bulldogs have qualified for the College World Series for the second-straight year. Photo by: Chris McDill/Special to The Dispatch

For the second time in as many years, MSU (51-13) will play in the College World Series after dispatching of Stanford (45-14) by an 8-1 score Sunday night at Dudy Noble Field in Game 2 of the Starkville Super Regional.

The Bulldogs' win gave the hosts a series sweep after taking down the Cardinal 6-2 on Saturday.

Junior catcher Dustin Skelton led the offensive charge with a 2-for-4, three-RBI night. Skelton's three-run triple off the top of the right-center field wall in the third inning broke a 1-1 tie and put MSU ahead for good.

On the mound, senior starter Peyton Plumlee threw 6 2/3 innings, allowing just one run on two-hits. Plumlee's six strikeouts were his second-highest single-game total of the season.

Seniors Jared Liebelt and Cole Gordon closed things out in relief of Plumlee, combining for 2 1/3 innings of two-hit ball.

The victory gives MSU its 11th ever CWS appearance and third since 2013.

The Bulldogs will face, in their Omaha opener, the winner of today's decisive Game 3 of the Chapel Hill Super Regional between No. 14 seed North Carolina (46-18) and Auburn (37-26).

Joining MSU in its half of the bracket will also be Michigan and No. 2 seed Vanderbilt, both of whom advanced Sunday. The Commodores won two straight to stave off elimination against Duke, while Michigan knocked off overall No. 1 seed UCLA in a three-game super regional.

CWS game times have yet to be announced.