Slimantics: Bulldogs' ninth inning was a magical last game for the seniors at Dudy Noble Field 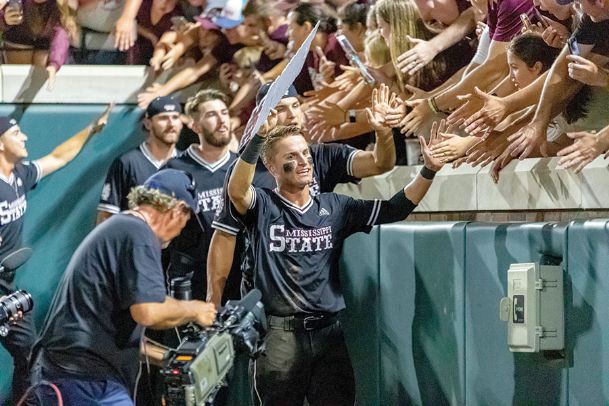 Jake Mangum celebrates with the fans after Sunday's super regional victory over Stanford at Dudy Noble Field. Mangum, nicknamed "The Mayor of Starkville," slapped the 378th hit of his collegiate career in his last home at-bat. Photo by: Chris McDill/Special to The Dispatch

Fans hang a sign in right field thanking seniors Jake Mangum and Elijah MacNamee. Both have created memorable moments during their four-year collegiate careers that will end in Omaha, Nebraska, at the College World Series.
Photo by: Chris McDill/Special to The Dispatch

STARKVILLE -- A baseball game, as everyone knows, is nine innings.

But on Sunday night, that format was altered. What you had, instead, was eight innings of baseball, followed by a Hallmark Channel movie.

Mississippi State punched its ticket to the College World Series for the second year in a row Sunday evening with an 8-1 super regional win over Stanford before a full-throated horde of 11,597 fans at Dudy Noble Field.

While the Bulldogs' ultimate fate is unknown, Sunday marked the final game at "The New Dude," for a handful of seniors and drafted underclassmen.

The ninth-inning send-off they received wasn't merely good: It was suspiciously good, almost to the point of being contrived.

"If you think I can put this into words, you're crazy," said Jake Mangum, the senior center fielder who has become the face of the program over his four memorable years in Starkville.

"The ninth inning was pretty special, to see our guys get congratulated as they finished up playing their last game at The Dude," Bulldogs coach Chris Lemonis offered. "I keep thinking we've had our best night, but it just keeps getting louder and louder every game."

By the end of the eighth inning, the Bulldogs had built a comfortable 5-1 lead. Under normal circumstances, the Bulldogs would not have even come to the plate in the ninth inning.

The NCAA, and perhaps the Baseball Gods, were having none of that, though.

While the NCAA stages super regionals at the home ballpark of the higher-seeded team, every effort is made to create a neutral environment.

Sunday, that meant no strobe-light effects or flashing scoreboard after a Bulldog home run or walk-up music chosen by Bulldog batters as they approached the plate. It also meant that MSU was the designated visiting team after being the home team Saturday in its 6-2 win over the Cardinal in Game 1 of the best-of-three series.

So the Bulldogs did come to the plate in the ninth inning.

Anybody want to take a stab at guessing who was due up to start the inning?

The walk-up music began. "I Don't Want To Lose Your Love Tonight," by the group The Outfield, appropriately enough, blared over the sound system as NCAA neutrality gave way to sentiment.

The 1985 song was a hit for the otherwise obscure group, which meant The Outfield had exactly 377 fewer hits than Mangum, the SEC's all-time leader in hits, as he walked to the plate, pausing to doff his batting helmet as the crowd rose as one to honor the "Mayor of Starkville."

Then, on the first pitch, Mangum slapped a ball between third base and shortstop for his 378th career hit in a Bulldog uniform.

Of course he did.

"My first hit was the same as the last one, right through the six-hole," Mangum said a half-hour after the game. "How's that?"

After Jordan Westburg followed with another single, Elijah MacNamee, the Bulldogs' senior right fielder, worked a 3-ball count. Under normal conditions, he'd take the next pitch. This was anything but normal, of course. "Mac" was up there hacking, fouling off the next pitch and earning another strike to run the count full.

It had been a tough end of the season for MacNamee. He played with an injured foot for the second half of the season, missing the final seven games before the NCAA playoffs began. The past week was even worse. Almost 1,200 players, including 11 Bulldogs were chosen during last week's Major League Baseball Amateur draft. The clutch-hitting MacNamee, who put last year's team on his back and carried it to the College World Series with two walk-off three run homers, never heard his name called.

So, naturally, on a 3-2 pitch, MacNamee crushed a no-doubter home run over the left-field fence for yet another three-run homer as the Bulldogs lost whatever was left of their collective minds.

"He is such an awesome player and an even better kid," Lemonis said. "The day after (the draft), he showed up with a smile on his face and was pumping everyone else up. The game rewards that kind of attitude. That home run was pretty fitting."

Then came the bottom of the ninth, with grad student Cole Gordon taking over on the mound.

He struck out the first batter, retired the second batter on a fly ball and then -- well, you can guess what happened next. Gordon struck out the final batter to end the game and empty the Bulldog dugout as the players dog-piled in celebration on the infield.

"I got kind of choked up there in the bottom of the ninth watching Cole, a guy we had to talk into coming back this year," Lemonis said. "That was an awesome moment."

But there was no doubt who the man of the hour was.

Since capturing an SEC batting title as a freshman, Jake Mangum has been in the middle of everything. In his four years, MSU reached the super regionals all four years and are now making their second straight trip to Omaha, its third in seven years and 11th overall.

Mangum, who led the Bulldogs' five-minute procession around the stadium after the game, was soaking in the scene long after the ended.

But a storybook ending doesn't come until the end, he noted.

There's work left to do.

The Bulldogs may indeed reach that goal.

But it's hard to imagine an end more perfectly scripted than Sunday night.

"It was magic," Mangum said.