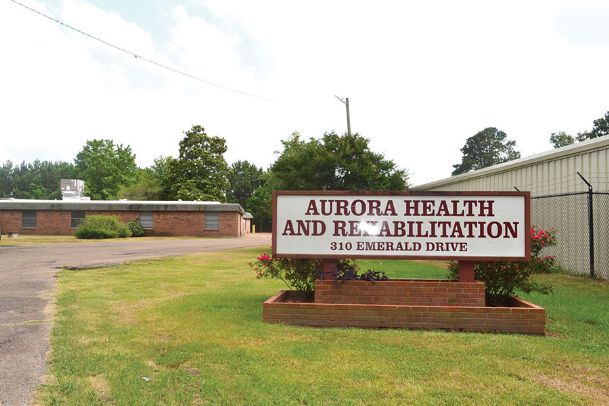 Aurora Health and Rehabilitation, a nursing home in East Columbus, has been named a candidate for a Special Focus Facility, a federal program designed to identify poor performing nursing homes. The Center for Medicare and Medicaid named five candidates in Mississippi as the lowest performing in the state. Photo by: Mary Pollitz/Dispatch Staff

Aurora Health and Rehabilitation, a nursing home in East Columbus, is considered one of the lowest-rated nursing homes in the state, according to a report released by the Center for Medicare and Medicaid.

The nursing home, located on Emerald Drive, is one of more than 400 nursing homes nationwide that was recognized Monday as a candidate for Special Focus Facility due to a "persistent record of poor care."

Nursing homes listed as candidates are among the lowest performing nursing homes in their states, and potentially could become an SFF facility once the current facility graduates or is terminated from the SFF program. Aurora is one of five such nursing homes in Mississippi.

"We provide each state with a list of five facilities that essentially preform the worst on the health inspection surveys," Kate Goodrich, CMS director of the center for clinical standards and quality, said in a press conference call Wednesday. "These (candidates) typically are facilities that have systemic issues with quality and safety. They really are the poorest performers."

According to the CMS website, Aurora has faced one federal penalty in the last three years. That fine amounted to more than $16,000 on Sept. 13, 2018, the date of the last health inspection. During that inspection, Aurora faced eight health deficiencies, including failing to protect residents from all types of abuse; failure to provide basic life support; failure to develop a plan that meets all residents' needs; failure to post nurse staffing information daily; failure to honor residents' right to request or refuse treatment; failure to implement an infection prevention and control program; and failure to provide lab tests when ordered.

Specifically the inspection cites an incident where a resident, who goes unnamed in the report, was found unresponsive and CPR was not administered in a "timely manner." The resident died. The report did not indicate when the incident occurred.

The citations report few other residents were affected, and that all citations were corrected October of that same year.

In Mississippi, there is only one nursing home that can be named an SFF at a time. Goodrich said there are 88 SFF slots in the country and five candidates for each slot. Once a nursing home becomes an SFF facility, it has a set amount of time to implement a corrective action plan or face losing Medicare and Medicaid funding.

CMS performs one unannounced health inspection a year and completes evaluations whenever a formal complaint is made against a nursing home. After completing annual health inspections, CMS provides the state agency with the list of five candidates per slot and the state agency nominates the priority facility to receive the "increased scrutiny." Candidates and SFF nursing homes are compiled after CMS finds deficiencies during these inspections. Inspectors assign nursing homes points depending on the "scope and severity" of deficiencies, and the nursing homes with the most points are identified as candidates.

Goodrich added facilities are all ranked on a five-star system, with five being the best, based on health inspections, staffing levels and quality measures. Nursing home reviews and comparisons can be found on the CMS Nursing Home Compare website. Of more than 15,000 nursing homes, about 3,000 hold the lowest overall one-star rating, including Aurora.

Aurora received a one-star rating for both health inspection and quality measure rating, while the staffing rating received an average three-star review.

Aurora Administrator, R.J. Alipour, was not in the office when contacted by The Dispatch, and no administrators returned calls by press time. The nursing home's legal name is Aurora Australis LLC according to the Secretary of State's office. William Orand serves as president. Orand did not return calls to The Dispatch by press time.

Goodrich said while candidate facilities don't receive the same scrutiny as SFF facilities, they could face penalties including fines, denial of Medicare or Medicaid funding for new residents, and directed plans of action to alleviate systematic issues.

Seema Verma, CMS administrator, included a letter in CMS's report to senators showing the budgetary constraints that limit the number of SFF facilities at a time.

Goodrich added SFF nursing homes typically remain as such for 12 to 18 months. An SFF receives twice as many inspections, two a year, as a non-SFF facility. A nursing home can graduate from the list after passing two consecutive inspections, six months apart, showing the facility has overcome its "systematic issues."

Since 2005, Goodrich said 90 percent of facilities have graduated from the SFF list while 10 percent have been terminated from the Medicare program.

"CMS urges every American to consult their doctors, their families, their loved ones and Nursing Home Compare before making decisions about nursing home care," Goodrich said. "Administrator Verma has made ensuring quality care in nursing facilities a priority and recently announced a five-part plan that focuses on strengthening requirements for health and safety for nursing homes, working with states to enforce these statutory and regulatory requirements, increasing the transparency of nursing home performance on Nursing Home Compare and promoting improved outcomes for residents while reducing unnecessary paperwork burden. ... CMS work isn't done. We're just getting started."