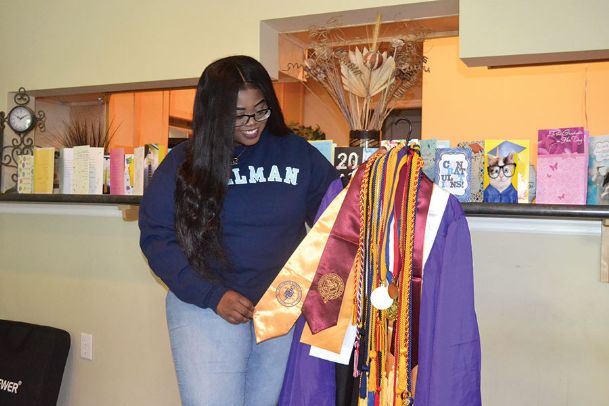 Columbus High School 2019 graduate Marian Turner hasn't made a B in class since elementary school.

While taking dual enrollment classes at EMCC and Mississippi University for Women, Turner wasn't even set on graduating with her associate's degree before getting her high school diploma, but it happened anyway.

"I took 23 classes in all," Turner said. "I didn't decide to graduate (from EMCC). It kind of happened on accident. I just took too many classes."

Turner's mother, Aubra, knew her daughter performed well at EMCC, but she didn't know how well until she attended her graduation.

Turner's academic goals started early when she began researching colleges and universities as a freshman in high school. She discovered Spelman College, a private women's college in Atlanta ranked as the No. 1 Historically Black College and University by U.S. World and News.

"I saw the students they accept. I knew it was competitive," Turner said. "I wanted to get there and at least get accepted. My support system was my mom and dad and grandparents (and) they all encouraged me to keep going. At first it was no B's, then nothing below a 95, then 98."

To get to Spelman, Turner decorated her resume with more than 15 organizations, holding positions in each extra-curricular she picked up. Being a member of the Mayor's Youth Council, Lowndes Young Leaders, CHS mock trials, beta club, golf, band and more, Turner said she stayed busy juggling meetings, high school and college course work.

"That was different," Turner said. "It was just time management. I had a schedule set where I would do my high school classes during school time. My college classes, I would do those after school or on the weekends. Dealing with the classes and the different organizations I was in, it was stressful. It just kept building each year, but I used Spelman as motivation to keep going."

"I've personally never met a person like her, as driven, diligent and as kind," Ewing said. "She's the most humble person I've ever met. She's been amazing since the day I met her. She's been consistent. She's just incredible."

Throughout her senior year, Turner applied and was accepted into 20 different colleges and universities, including Howard University, Dilliard University, Jackson State University and Xavier of Louisiana. She compiled more than $400,000 in scholarships.

After she found out she was accepted into Spelman, Turner waited for financial aid and scholarships to pour in. Nearing May, Turner had no word from Spelman.

"That was a very stressful time for us," Aubra said. "We were about to give up on it. I told her 'Marian, you might have to look at a second choice.' She was getting scholarships coming in and she had to say which school she was going to, but we didn't know. Other schools were writing her and we needed an answer."

One day while Turner was watching Netflix on her computer, she opened an email revealing she not only got a scholarship to Spelman, but a free ride nearing $200,000.

"I told my mom and we just started screaming," Turner said.

While writing more than 30 scholarship recommendation letters for Turner, Ewing said she remembered Turner talking about Spelman as a freshman.

"She knew she wanted to be better," Ewing said. "She told me as a ninth grader she wanted to go to Spelman. I just kind of looked at her. Spelman is a great aspiration, but a lot of times it's really expensive and they give out very few free rides. It was my prayer for her that she would get the opportunity. She really put in the work and I'm so proud I could cry."

Gearing up for Spelman, Turner said she plans to double major in international studies and Spanish. Her passion for Spanish started early, when she was at Joe Cook Elementary.

"I did Spanish there. I ended up falling in love with the culture and I thought it would be nice to study other countries and cultures and learn about how things work there," Turner said.

Tempted to go into the political field, for now Turner said she wants to study global policy and international development and is simply excited about moving into the honor's dorms on campus.