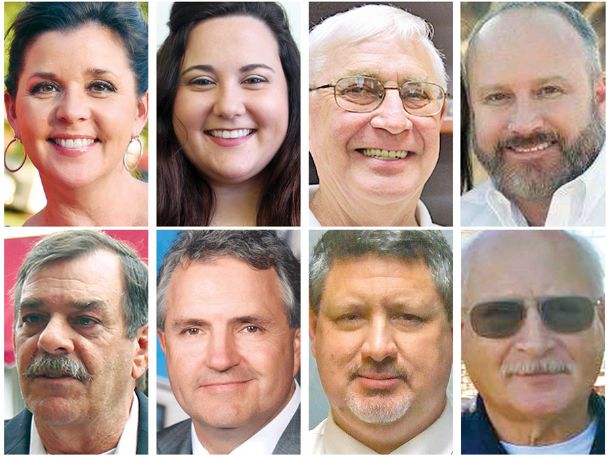 Candidates for chancery clerk, District 1 supervisor, District 17 state senator and District 1 justice court judge in Lowndes County touted their years of job experience, business ownership and community involvement as reasons why they would make the best public servants at a candidates forum at the Caledonia Community Center Thursday night.

A group of Caledonia residents, led by Amanda Boltwood and supported by Caledonia Mayor Mitch Wiggins, organized the forum to encourage public participation in the voting process, Boltwood said. The forum, the first of two to be held before primary elections in August, was attended by more than 100 people who submitted questions to the candidates in writing beforehand.

"I'm really happy with the turnout and participation, honestly," Wiggins said. "I'm glad people came out and submitted questions. It's good to hear people care and want to be engaged."

Cindy Egger Goode and Jessica Lancaster Pierce, both Republicans, will face off in the primary for chancery clerk. District 1 supervisor candidates Steven Pyle, Independent, and incumbent Harry Sanders, Republican, will wait until November for their turn. However, both sets of candidates had something in common: they had to explain the duties of their position and why they were best suited to hold it in response to questions submitted at the forum.

Goode, who spoke first, explained the chancery clerk's office primarily files records -- everything from land deeds to divorce or custody agreements, military discharges and estates. She referenced her 14 years of experience working as a deputy chancery clerk under current Chancery Clerk Lisa Younger Neese, who will retire at the end of the year, as well as her 15 years as a paralegal in county court, when explaining her qualifications for the role.

Pierce said she would draw on her experience working in the chancery clerk's office for eight years, as well as her work at Cadence Bank for the past three, to succeed in the position.

"In my experience, people coming into the office need a friend," she said. "Maybe they're filing estate papers or dealing with something else that's difficult, and they need someone to walk them through that process."

On the supervisor's side, Sanders explained that -- contrary to some people's belief, he said -- the board of supervisors' role is not to mainly take care of county roads.

"We leave that to the road department," said Sanders. "One of our major responsibilities is financial management. We're responsible for raising the millage, approving what the school district asks for. It's imperative that people know about money to be in that position."

Pyle, who owns two businesses in Columbus and Starkville, said he feels he is skilled at large-scale financial management because of his experience in business. His primary concern, he said, is making Lowndes County an attractive place to work and live.

"I believe we need good change," he said. "There are so many things evolving before us. I want to look at a sportsplex, things they have in Starkville and in Tupelo that will attract money and new residents to Lowndes County."

While fielding questions about state spending, state Senate District 17 Libertarian candidate Danny Bedwell and Republican incumbent Chuck Younger had differing views about the use of taxes. Bedwell said he was opposed to the addition of any more statewide taxes, especially those meant to pay for infrastructure such as bridge repairs like the one on Highway 182 in New Hope this summer.

"We're already taxed too much," he said. "There's plenty of money in the (Mississippi Department of Transportation's) budget for bridge repairs. ... But we're being wasteful. We just need to trim the fat."

Younger "did not disagree" with Bedwell, but said that he believed statewide taxes were the best way to pay for infrastructure.

"Sure, we waste money," he said. "This is America. But we have to pay for things somehow. This is the best way to do it in my opinion."

Hemphill, a law partner at Dunn and Hemphill in downtown Columbus, emphasized that while he does work at a law practice when not on the bench, he is "always available" to sign warrants and conduct other business as needed.

"Ask narcotics officers in Columbus or Lowndes County," he said. "Ask another judge how many times I've signed warrants at my law office. ... My availability is not an issue. ... Even though I do practice law, I am available at all times to sign warrants or bonds whenever I'm needed."

Kilgore, who resigned as Caledonia town marshal in January, said that since he is retired, he is available "all the time, at any time."

"I see this (office) as a need for the future," he said. "Lowndes County isn't getting any smaller. I want to always be available to help other judges. Because I'm retired, I can be."

Party primaries are set for Aug. 6. The general election will be held Nov. 5.