False pretense charge dismissed for suspect who escaped from MDOC 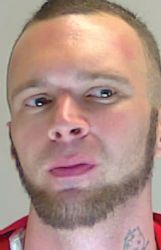 Justin Lee, 30, who is currently in MDOC custody, had his false pretense charge dismissed without prejudice, according to Lowndes County Circuit Court records. Lee was arrested on the outstanding warrant in December 2017 after escaping from the Greenwood Work Center in Leflore County. Authorities at the time said Lee had written a $13,000 check from a nonexistent bank account and used it at a local car dealership in September of that year.

Lee, who was already serving a 13-year sentence for simple assault on a police officer and two other counts of false pretense, had his parole revoked following his 2017 arrest. Because of that and the fact that the victim received the vehicle back after Lee's arrest, 16th Circuit District Judge Lee Coleman ordered the dismissal of the 2017 charge.

Lee attempted to hold a talent show late July 2017 on behalf of a non-existent record company called "Gemini Records," which he said was headquartered in Nashville, Tennessee. More than 100 people from the Golden Triangle paid $15 each to participate in the show, with the hopes of winning one of two promised recording contracts with the record company. The talent show, which was expected to be held at the Columbus Fairgrounds, never took place.