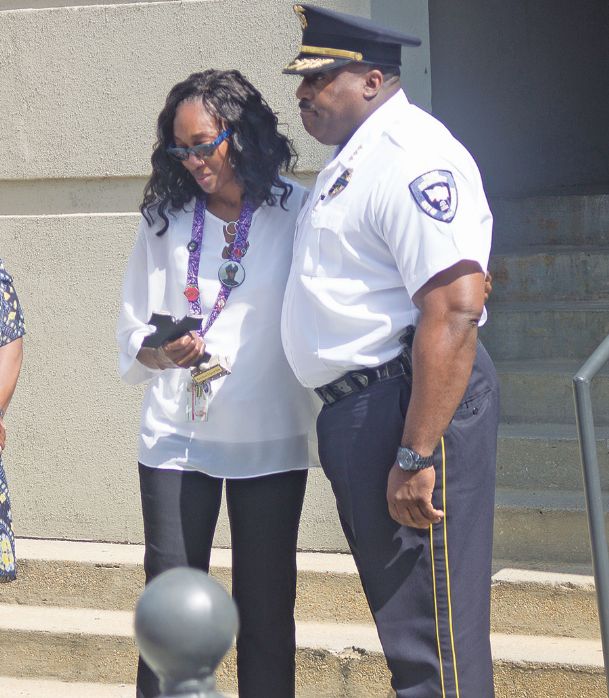 It's been a few days more than four years since Liquori Tate was fatally shot in Hattiesburg.

Tate, a Starkville native and Hattiesburg Police Department officer, and fellow officer Benjamin Deen were killed on May 9, 2015. Tate was 25 at the time. Deen was 34.

On Tuesday, Starkville Police Department held a memorial service to recognize police officers from the area who have died in the line of duty. During the service, Police Chief Frank Nichols gave Youlander Johnson, Tate's mother, a cross in recognition of Tate's service.

"Surrounding communities, families, friends," she said. "They've extended a great deal of support toward us, whether it's a word or a hug -- just whatever we needed, they've been there."

Alonte Tate, Liquori Tate's sister, said the family has also received support since the incident from people who are far away from Starkville or Hattiesburg. She said it helps to know that people in other areas of the state and country remember Tate for his service.

"I'm thankful for the support of the community but support of people who are far away who send a word or a text, or who have done a thing in their own hometown," she said. "We really appreciate that someone would take time out of their busy schedule to honor our loved ones -- even far away."

Nichols said the memorial service, which is the first SPD has held, is a part of National Police Week. It corresponds with a statewide memorial service planned at the capitol in Jackson today. SPD regularly sends motorcycle officers and its honor guard to the state service -- and will this year -- but Nichols said he wanted to take the chance to recognize area officers who have fallen.

"I wanted to do something locally, here at home," Nichols said. "Just a little small thing for the citizens of Starkville -- to make them aware that we have had officers, not here in Starkville, thank God, that have made the ultimate sacrifice."

Mayor Lynn Spruill, speaking during the service's opening, said it's important to be mindful of officers' service, especially while there are chances to show appreciation while they're alive, instead of after they've passed.

For Johnson, the service and the recognition it represented, not only for her family but for the families of all police officers, was a special occasion.

"It's awesome," she said. "It means a lot to me and my family that they're taking a moment out of their schedules to show they have not forgotten not only the officers who are still standing but the ones who have fallen. It's a great honor to receive this in honor of my son.

"These are shoes that I hope no other person would ever have to walk in," she added. "It just means a lot."