Hawkins: America is most addicted society in the world 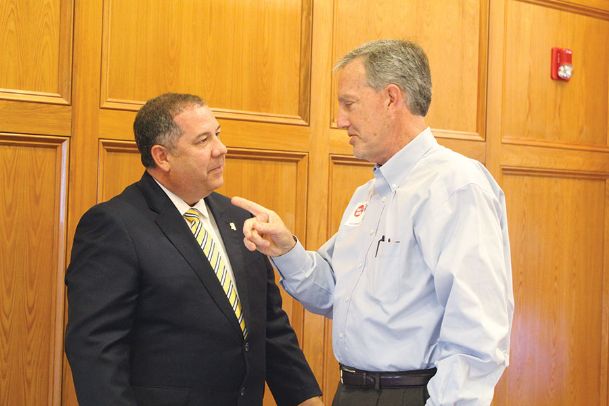 About 128 people per-day die from opioid overdoses around the country, with 2016 and 2017 seeing more overdose deaths than deaths from both car accidents and gun violence.

That's according to Mississippi Bureau of Narcotics Lt. Eddie Hawkins, who spoke about the nation's opioid epidemic and other drug trends he sees in Mississippi and the United States during a 30-minute presentation before the Columbus Rotary Club Tuesday.

Hawkins said about 650,000 people per-day are prescribed opioid products, and that more than 800 people per-day start using heroin, an illegal opioid that victims often get addicted to after becoming hooked on prescription pain killers.

Since the epidemic began, the U.S. rescheduled hydrocodone products, making it harder for customers to obtain them legally or for doctors to overprescribe them, Hawkins said. But that's resulted in a "double-edged sword."

"A doctor is limited to how much he can prescribe. There's zero refills, no longer any call-in prescriptions, so it's limited how much a patient can obtain, and that's a good thing," Hawkins said. "But what's happened is all people who are addicted to opioids are now changing their drug of choice, and they're changing to other drugs like heroin. So now it's becoming a bigger problem because they can't get prescriptions they're looking for. Now they're turning to the street and getting heroin."

Law enforcement agencies are also seeing drugs such as fentanyl, a particularly potent synthetic opioid, and other drugs, some of which are so dangerous that police officers have overdosed just by being in the room with the chemicals, Hawkins said. Officers have now begun carrying NARCAN, which reverses the effects of opioid overdoses long enough for victims to get to a hospital.

Hawkins' presentation also covered marijuana and other THC (tetrahydrocannabinol) products -- and particularly the problems he thinks are caused when states legalize those products.

"Back in the early '70s when marijuana was really popular, the THC content, the active ingredient in marijuana ... was somewhere around 3 to 5 percent," he said. "Now the ... marijuana that's being grown has a THC content of around 30 to 35 percent. Now they're taking that plant material and they're actually able to extract the THC from that product and use that THC in other products. And the THC is reaching somewhere around 90 percent. So it's a big problem. It's not the same drug we used to see."

Hawkins said THC now shows up in products like vape pens and edibles such as cheeba chews, tootsie roll-like candies sold legally in California and Colorado as medical marijuana -- all products children can easily get their hands on, he said.

"We are starting to see more and more of these products sold here in Mississippi," he said.

He added since marijuana hasn't been legalized on the federal level, businesses that sell marijuana and THC products in states like Colorado are having to keep the money they make at the businesses, resulting in higher crime rates as drug traffickers and petty criminals now know where to find cash.

Hawkins also showed a news clip about a study by Northwestern University and Harvard University looking at how recreational use of marijuana affected the centers of the brain that control motivation and addiction. The study found that brain chemistry in "casual users" of marijuana -- those who smoked it at least once a week but were not chemically addicted -- was more affected than that of people who didn't smoke at all.

From there, Hawkins moved on to talk about the synthetic drug "Spice." In 2015, he said, Mississippi had the highest number of overdose deaths from spice. He talked to a coroner who performed an autopsy on one of the victims, who told Hawkins how the drug broke down muscle tissue.

"When you do an autopsy, they take parts of your body and weigh them, measure them, take samples," Hawkins said. "And normally, when you take a human heart, you can set it on the table just like a rump roast. Well after he had used this product, it broke down the muscle in the heart so much that when they set it on the table, it just fell apart like jelly. So it was causing big problems.

"America's the most addicted society in the world," he later added. "We'll buy anything."