Students back at AMS after Tuesday gas leak 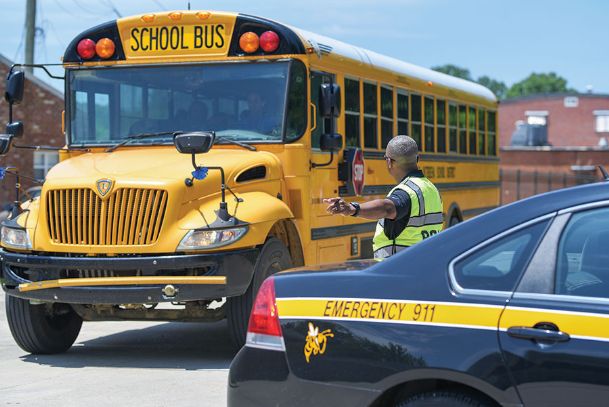 Armstrong Middle School students are back at school today after a Tuesday gas leak forced officials to evacuate the campus.

Atmos Energy workers identified a "small gas leak" outside the band hall Tuesday morning, and the evacuation of roughly 1,200 students, grades 6-8, began about 11:30 a.m., with buses taking them to the high school football field by a little after noon. There, a crowd of parents waited to check out and pick up their children, a process which lasted until about 3 p.m.

"We had a small leak at Armstrong Middle School," Superintendent Eddie Peasant said. "Atmos Energy was right there. After they evaluated the situation, they felt the level was high enough for an evacuation, just as a precautionary measure."

As the 1,200 students were bussed to the SHS stadium, parents were urged to check out students at the ticket office. Public Information Officer Nicole Thomas said most students were picked up, and bus students that were not picked up were taken home on their normal bus routes.

"We had six clerical staff working to get people checked out as quickly as possible," Peasant said. "One thing that was probably a bigger challenge was the organization of that area. We worked through that, and we did have some lines. I will say, 98 percent of (parents) were really patient."

Peasant updated the school board during its regularly scheduled meeting Tuesday night. He said after someone smelled gas at AMS, the maintenance department called the fire department and Atmos Energy to assess the situation. He added Atmos identified the problem.

"We had some old pipes, and that has given on the gas lines from the street to the building," Peasant said. "There were several issues on that line and that's going to have to be replaced."

David Baggett, assistant superintendent, told the board AMS was safe and cleared for class but the gas would remain turned off for the remainder of the school year. Construction to repair the pipes and gas lines will start at the end of the school year.

"It's not something that's going to be done overnight," Baggett said. "We just cut the gas off, we don't need it. ... We will be responsible for the main line into our building and where it meets the other lines."

"It was a leak on their fuel line," Whittle said. "When that kind of thing happens, it's the responsibility of the owner to fix that. When we knew there was a leak, we turned them off. They did exactly what we want them to do. If someone smells gas, call us so we can shut it off. We want to make sure everyone is safe."

Without gas, the cafeteria will serve deli sandwiches, salads, assorted fruit, veggies and dip, according to an email Thomas sent parents Tuesday night.

Though an admittedly unfortunate situation, Peasant said he was pleased to see how students, faculty, staff and parents responded.

"We operated as efficiently as we could with these circumstances," Peasant said. "With students in school (at SHS) and 1,200 additional students, it was a little busy and hectic. We were really pleased with our teachers and students at Armstrong Middle School. The kids were really attentive and did what they were asked to do. They were cooperative and the teachers and staff just went to work."