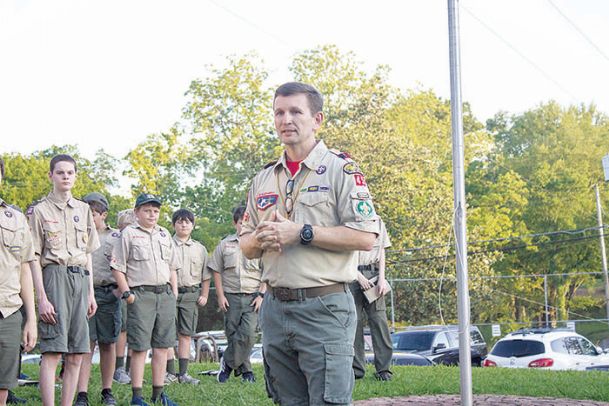 Troop 45 Scoutmaster Jason Tiffin talks about the âSave the Hutâ campaign during a Monday dedication ceremony. The troop held the ceremony to celebrate the completion of a renovation to its scout hut near First United Methodist Church. Photo by: Alex Holloway/Dispatch Staff

STARKVILLE -- Martha Barnes wanted to cry when she walked into the newly renovated Boy Scout Troop 45 hut on Monday evening.

Barnes, who's served with the troop committee since 1972, said the troop has gone through several homes through the years, and even toyed at one point with the idea of building its own hut. But to see the hut Troop 45 has called home since the mid-1990s renovated and brought to modern standards, she said, was a sight to behold.

"We've had blueprints drawn up to build a scout hut," she said. "It's been a dream for many, many years. And to see this -- I'll be honest with you, I walked in the front door and I wanted to cry because I was so happy that all of these young men will have this to experience scouting."

The troop hosted a dedication ceremony for the hut, which is directly east of First United Methodist Church. Built more than 50 years ago, the structure served other functions for the church before the scouts began using it.

Jason Tiffin, who concluded his stint as the troop's scoutmaster on Monday, said the "Save the Hut" campaign has been a three-year effort. It started when leaders made a list of all the repair work that needed in order to bring the hut up to standard.

"I remember walking through in 2016 and making (that) list," he said. "After several years of seeing things that needed to be done, we felt that we needed to make a real, serious effort."

Allison Tiffin, Jason's wife, led the fundraising efforts for the campaign. She said the Troop needed to raise $50,000 for the hut. Half of the money came from First United Methodist Church, which sponsors the troop. The scouts raised the rest.

"We had a great response," she said. "We raised over $10,000 through the dinner and silent auction. The church was great as well -- I can't say enough about that. We had some donors to give some large contributions as well, and former scouts and scoutmasters."

Richard Tollison, Perry Sellers and James Hicks are some of the adult leaders with Troop 45 who helped renovate the hut. They said the building, due to its age, was falling into disrepair. It suffered from water damage in places, and Tollison said the glass was starting to fall out of the windows.

"There were parts of the floor that were just broken all the way through," Sellers said.

Thanks to their work, and the work of other adult leaders and some of the scouts, the building has newly-refinished floors, a new-look interior with one of the walls knocked out to open more room in the main area, new cabinets and appliances, new wiring and plumbing, new LED lighting and a new heating/cooling system.

Tollison said the biggest new addition is a pavilion that serves as a gathering place behind the hut. The originally planned pavilion was set to be smaller than the one that was ultimately built because the troop found that the lot extended farther back than expected once they started to clear out the vegetation behind it.

Monday's ceremony included dedicating two rooms in the Troop 45 hut after three people who have been integral to the troop's success.

One room, called "The Barnes Room," was dedicated to Martha and Michael "Doc" Barnes -- Martha for her long service with the committee and Michael for his tenure as scoutmaster from 1972-92.

Michael said the renovated hut is a far cry from Troop 45's old meeting places. He said the troop used to meet in a room at FUMC, then moved to a house on the west side of the church. After that, it moved to the hut, which was old even when they first moved in.

Despite the honor, he said the biggest pleasure he's had in working with Troop 45 has been watching it mold young men into leaders.

"That's the payday," he said. "Not the little ribbons you get, or the bangles and wangles, but the kids. When they succeed -- man, you've succeeded."

The troop dedicated another room to Allen McBroom, who served as scoutmaster from 2005-13.

McBroom said he never expected the honor and was stunned when Allison called to inform him they were naming the room after him.

"I'm rarely at a loss for words, but that was a time when I was at a loss for words," he said. "... I'm still stunned. I have to really look at that to convince myself it really happened. What makes it really cool -- only one other room has a name and it's named after these two (the Barnes Room). That's pretty rare air right there."