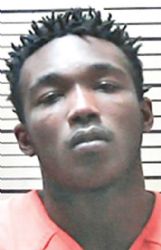 A Starkville man has been arrested for child abuse after reportedly assaulting a 17-year-old victim at Brookville Garden apartments.

According to a Starkville Police Department press release, officers arrested Leviticus Bell, 18, on Sunday after responding to a reported assault at the apartment complex on Everglade Avenue.

According to an affidavit The Dispatch obtained from Starkville municipal court, Bell is accused of striking the victim multiple times in the face with a closed fist and picking her up and slamming her into the ground, leading to her spraining her knee and her head hitting the side of a brick building. He's further accused of repeatedly slamming the victim's head into the side of the brick building, giving her a concussion.

A warrant was issued for Bell's arrest and he was later arrested at an apartment complex on Louisville Street, according to SPD's release. He's being held in the Oktibbeha County Jail on $20,000 bond.