Student-teacher program brings teacher from Germany to US 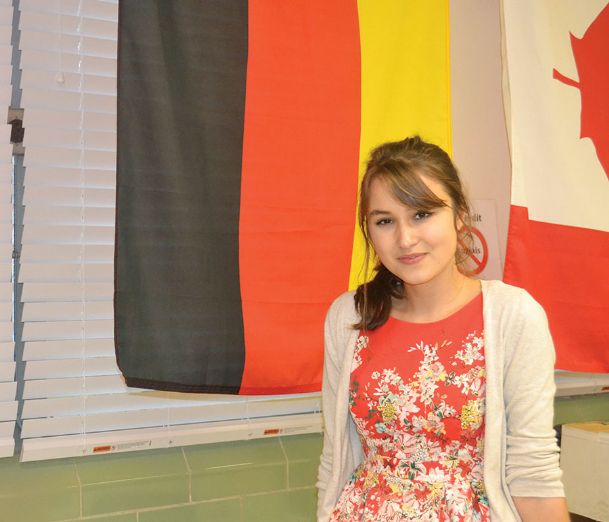 Laura Justus of Germany sits in her classroom at Hooper Hall at Mississippi School for Mathematics and Science Thursday afternoon. Justus, 22, spent the past school year working as a student teacher in the German, chemistry and trigonometry classrooms. Photo by: Mary Pollitz/Dispatch Staff

Nearly 5,000 miles from her hometown in Germany, Laura Justus found her way across the world to Columbus.

Justus, 22, finished her bachelor's degree in her home country and was gearing up to start her master's when she heard about the Educational Exchange Service, a program that would bring her to America for the first time. At the same time, Mississippi School for Mathematics and Science German teacher Lori Pierce was applying for that German student-teacher program.

"I wanted to go abroad at some point," Justus said. "I thought, in one year, I will be (teaching in my) own classroom. I saw it and it sounded good to me. It was now or never."

The program is designed for German future teachers to help teach German as a foreign language across schools in the United States. Justus arrived in September and started her internship by overseeing Pierce's German class. By January, Justus was taking the reins and leading lessons.

Justus noticed stark differences in the American education culture that she now hopes to bring back to Germany.

"I think teachers are better at making connections with students," Justus said. "Our teachers were always authorities and we didn't know anything about them other than the subjects they taught. It is worth me trying to do that. I don't know how easy it will be because the system is how the system is, but I will try that."

Though slated to teach simply German, Justus' college focus was on math and chemistry. Since MSMS only offers one German class, she started teaching chemistry and trigonometry.

"I was nervous before teaching math or chemistry," Justus said. "I wasn't sure if my English was good enough or if the students were going to understand me. But it worked out. The students were really patient. I'm really going to miss them."

Something new and different

Justus was nervous embarking on a new journey, teaching a classroom of students for the first time.

Since arriving, Justus has adapted well to Mississippi, but she said she mostly misses her bicycle-friendly hometown where everything is within reach.

"Everything is so big here," Justus said. "My hometown is so small. Wal-Mart is as big as the village I grew up in. It probably isn't, but it seems like it sometimes."

While trying to taste as much American cuisine as possible, Justus found the Columbus flavor and portions far exceed those in Germany.

"The food and drinks are really big," Justus said. "We are used to having everything rather plain and try to avoid salt and sugar. The cafeteria here fries a lot of things I didn't know could be fried. It's really cool to try things here. You have really good burgers here, better than I've ever had in Germany."

A passion for teaching

Justus knew she wanted to be a teacher when she was in third grade. After finishing secondary school, she studied at Georg-August University, majoring in math, chemistry and teaching. While at the university, she continued fueling that passion for teaching by working part-time with Syrian refugees for three years.

"They match students from universities with refugees in the area and we mainly teach them German," Justus said. "We studied politics together, science and math, helping them integrate. It was a really fun experience. I was getting them able to go to the normal school system and get degrees."

Justus added working with refugees humbled her and helped her continue her path to becoming a teacher.

"It was really cool," Justus said. "The moms of those kids were so grateful and nice and I got a lot of invitations to dinner. It was really fun and we all had some profit from it. We learned to be grateful for what we had."

Saying goodbye and giving back

Though Pierce has taught German on her own for the past eight years, she said it will be a little more difficult without Justus by her side.

"She's an amazing teacher," Pierce said. "I think we made a really good team. ... When you have a student teacher, you think they're supposed to learn from you. She's really given us more than she has taken from us this year."

Having an expert in the room helped junior Jane Wang, 16, learn far more German than she anticipated.

"It's really nice because she's obviously fluent in the language," Wang said. "She's more seasoned to it. It was a really good experience to learn about new cultures. ... It's going to be so different next year when I take German II. I actually cannot imagine it. It's going to be a little bit emptier in a way because I am so used to her teaching me. She's been really nice. I'm really glad to have had the chance to meet her."

Justus will leave this week with MSMS the rear view mirror, but a promise that she will return one day.

"It was really cool experience and I learned way more than I did in my four years of university already," Justus said. "If I had to make this decision again, I would make the decision to come here again."