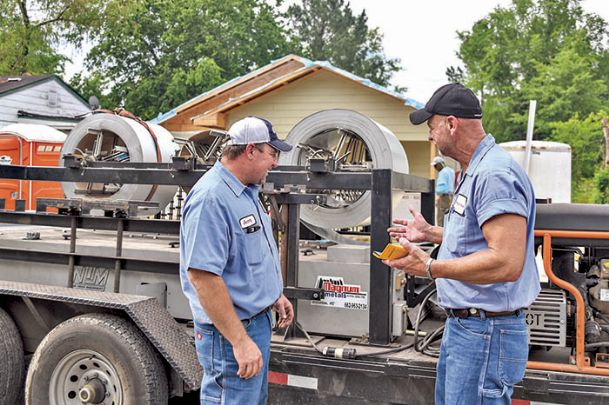 Jerry Wall, left, and Mel DuBois of Magnum Metals of Nettleton, prepare their fabricating machine to begin installation of a new steel roof at a house on 12th Avenue North in Columbus Tuesday. The machine shapes and cuts the rolled steel to exact specifications. The steel was donated by Steel Dynamics with Mississippi Steel Processing also prepping the steel. Magnum Metals and Ervin Brothers roofing are providing their services free of charge for the work, which is a Columbus Lowndes Habitat for Humanity Project. The house is the first Habitat building to feature a steel roof. Photo by: Deanna Robinson/Dispatch Staff

Slowly, but surely, the little house on 12th Avenue North is taking shape.

The slab has been poured and the house has been framed and wired. The plumbing and exterior siding has been installed.

Kathy Arinder, director of the Columbus-Lowndes Habitat for Humanity, hopes to have the house completed in June.

On Tuesday, workers prepared to put the roof on the home, which is a milestone in its own right.

When finished, it will be the 49th home built by the group since it was chartered in 1990. It will also be the first of their homes to feature a steel roof, thanks to the generosity of Steel Dynamics Inc. and its partners on the project - Mississippi Steel Processing, Magnum Metals of Nettleton and Ervin Brothers Roofing.

"This is definitely a first for us," Arinder said. "It's something that just never was in our budget. So when Steel Dynamics came to us and told us what they wanted to do, we were thrilled."

Mike Davis, outside processing coordinator for SDI and past Habitat board member, said the roof is a product of the company's new paint line.

"The steel has been primed and painted with a galvalume finish," he said. "There's a 50-year guarantee on the paint alone, so this roof will be there for a long, long time."

Because the rolls were too wide to accommodate Magnum Metals' equipment, which cuts the roofing sections to precise specifications on site, Mississippi Steel Processing cut the big rolls in half. On Tuesday, the Ervin Brothers roofers were finishing the measurements needed and the installation began.

Steel Dynamics has been involved in this project since it started in February.

"We sponsored the women's build day back in February, and we'll have the women and some men coming back to paint," Davis said.

When completed, Mary Bush will move back into her old address, if not her old home.

Bush, now 89, was forced to leave her longtime home after spending two weeks in the hospital suffering from mold-induced lung damage. The house was condemned and torn down about five years ago.

Since then, she has been living in a rental.

For her, the Habitat Home is an answered prayer.

"A voice told me to go down to (the Habitat office)," she said. "I didn't know nothing about it. But it was the Lord telling me.

Davis said about 60 volunteers from SDI have worked on the project.

"I think everybody has really enjoyed the project," he said. "This is the first metal roof they've ever had done, so it's exciting to be a part of that."t