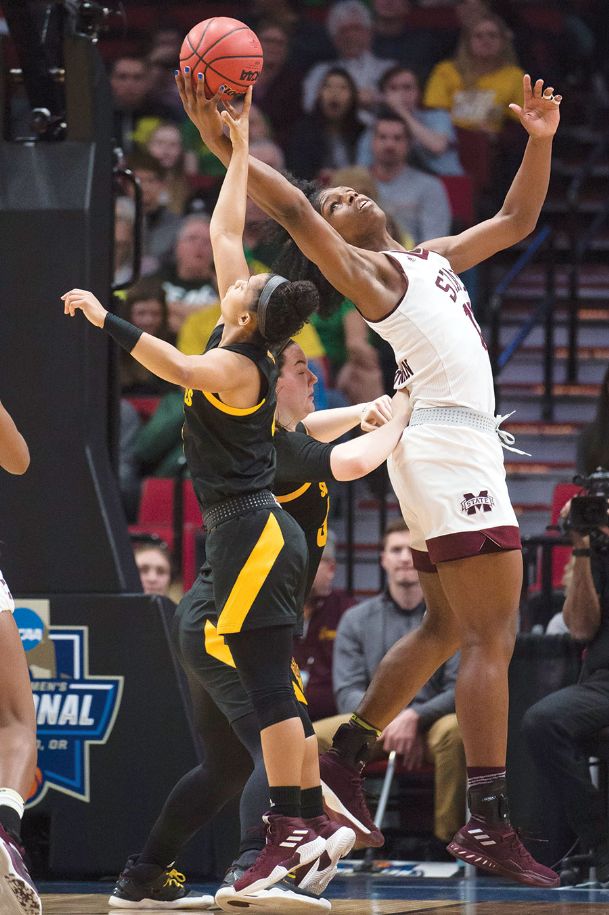 Mississippi State Bulldogs center Teaira McCowan (15) controls an offensive rebound against Arizona State Sun Devils guard Kiara Russell (4) during the first half in the semifinals of the Portland regional in the women's 2019 NCAA Tournament at Moda Center on Friday in Portland, Oregon. Photo by: Troy Wayrynen-USA TODAY Sports

Through three rounds of the NCAA Tournament, Mississippi State's women's basketball team has rolled, uncontested, but certainly not unmolested, over its opponents -- by a total margin of 104 points.

After each of those wins, Bulldogs' coach Vic Schaefer has made a point to say how much his senior center, Teaira McCowan, has grown during her four years at MSU.

McCowan was already 6-foot-7 when she arrived in Starkville from Brenham, Texas, in the fall of 2015 and she was still 6-foot-7 as she left the court in Portland, Oregon, Friday with a 76-53 win over Arizona State and a match-up against Oregon today in what will essentially be a home game for the Ducks.

So, obviously, Schafer isn't referring to stature when he talks about McCowan's growth, not only over the course of the past four seasons, but during this season as well.

She is certainly a far more polished, more skilled player than she was as a freshman, when she played just 13 minutes per game. But the greatest growth, Schaefer said, has come in her ability to control her emotions and maintain her poise.

That's no small feat for McCowan, for whom games are generally 40 minutes of assault and battery. From opening tip, McCowan is pushed, grabbed, shoved, goaded and taunted, always by two, and sometimes by three, opposing players. "Make McCowan Miserable" is the first thing you see on the chalkboard in the opposing locker room.

Generally, McCowan has handled the manhandling about as well as can be reasonably expected. But the times when she has lost her composure, the results have been catastrophic. It's hard to score and rebound at the rate McCowan does when you're sitting on the bench with foul trouble or sulking up and down the court, having appeared to have lost all interest in the game.

Other players can have off days and the Bulldogs are versatile enough to overcome it. When McCowan goes into a funk, it's uh-oh time and "Big T" is not immune from criticism when it happens.

McCowan is held to a higher, more difficult standard and you wonder what that must be like.

It must be sort of like the scene from the movie "Airplane." In the movie, Kareem Abdul Jabbar, the NBA Hall of Fame center, plays the role of an airplane pilot named Roger Murdock. In the film, where characters regularly break character, a young boy name Joey visits the cockpit and immediately recognizes the NBA star, even though "Murdock" insists he's not the player.

Joey brushes off that denial.

"I think you the greatest," Joey says, "but my dad says you don't work hard enough on defense. And he says that lots of times you don't even run down the court. And that you don't really try, except in the playoffs."

"The hell I don't!" he snarls. "Listen, kid, I've been hearing that crap ever since I was at UCLA. I'm out there busting my buns every night. Tell your old man to drag Walton and Lanier up and down the court for 48 minutes!"

Lose your cool, lose the game

It's fair to note that McCowan's class has lost just 17 of 150 games, so it's not like McCowan goes off the rails emotionally very often. But those lapses are memorable.

This season, there have been two games where McCowan lost her cool and, to a degree, her interest. It's no coincidence those are the only games MSU has lost this season.

Most recently, it happened in a Feb. 14 against Missouri. McCowan's numbers weren't awful -- 12 points and 13 rebounds -- but down the stretch, Missouri's constant harassment took McCowan out of her game and the Tigers pulled away in the fourth quarter to win by eight points in Starkville.

McCowan has been a different player since then, Schaefer insists. She's no longer a "bull in the china cabinet," is the way the coach puts it.

State has won all 11 of its games since the Missouri loss and Friday's win over Arizona State was an example of that growth Schaefer talks about. In the first half, McCowan took just one shot and scored only two points, as the Sun Devils draped over her like human kudzu.

She might have checked out, brooded or retaliated. Instead she responded by scoring 20 second-half points and setting the record for career rebounds in NCAA Tournament history (her 13 rebounds gave her 224 in 18 NCAA Tournament games).

That's a good sign, but the best measure of how much she has grown in the composure department will come today against an Oregon team that badly befuddled McCowan in a December game at Eugene, Oregon. McCowan scored just five points in 34 minutes, by far her worst performance of the season and among the worst of her career. Predictably, MSU lost that game, 82-74.

If the Bulldogs are to win today against a quality team in a decidedly hostile environment, McCowan will have to keep her energy high, her emotions in check and her head in the game.

All that's at stake is a third straight trip to the Final Four and a chance to bring home the national championship that has so narrowly eluded the Bulldogs in the last two years.

Today in Portland, McCowan will be the tallest player on the floor.

But it will be how much she has really "grown" that may well determine the outcome.