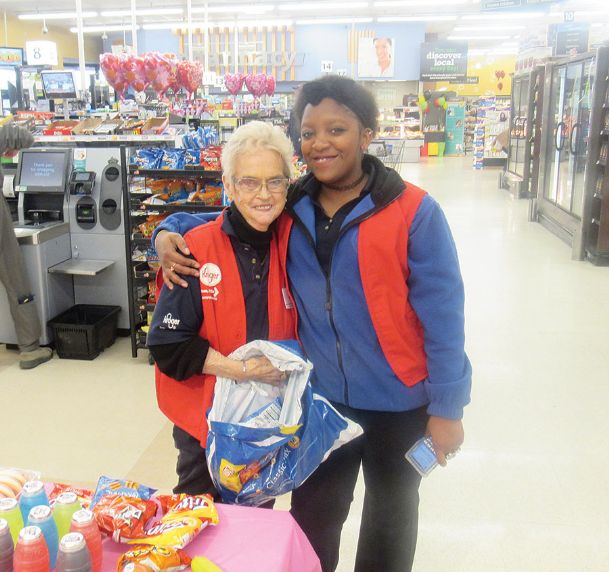 Columbus Kroger greeter Ann Wozniak said she loves working with fellow associates such as Quanisha Travis, right. "Every day, the first thing I do is go around and say hello to all the checkers and baggers and give them a hug if they're not busy," Wozniak said. Photo by: Slim Smith/Dispatch Staff

Kroger greeter Ann Wozniak encourages Emalyn Deola, 7, to choose among the free snacks the store offers to children on Friday afternoon. Wozniak said her work as a greeter allows her to spend times with kids, something the grandmother of seven has always enjoyed.
Photo by: Slim Smith/Dispatch Staff

Ann Wozniak works 20 to 25 hours a week at Kroger in Columbus.

The chorus of "Hey, Miss Ann!" echoes through the busy grocery store as customers encounter the store's official greeter and unofficial goodwill ambassador and employee mentor.

For someone who stands just 4-foot-11 and weighs about 90 pounds, the white-haired 77-year-old is a huge presence at Kroger.

"All the customers love her," said Ty Sanders, one of the store's assistant managers. "All the associates love her, too. She has a history with Kroger. She's worked here before. That's one of the reasons we decided to hire her back."

Wozniak's primary role is to greet customers as they enter the store, but since returning to Kroger in June, she's taken on a variety of roles.

"I play with kids and help customers," Wozniak said. "When I'm working on the other end of the store, next to the pharmacy, I look out for the old people, even though I'm an old person myself. So many older people come to get their medicines and I'm always watching out for them, to see if they need help."

As an example, last week, she said she noticed an older lady using a walker whose shoe was untied.

"She was there with a younger person, but who do you think got down on the floor and tied her shoe?" Wozniak said. "Young people don't pay attention like they should sometimes. They forget."

Wozniak does not forget.

It's the memory of her own difficult childhood that seems to have hardened her resolve, but made tender her heart.

Wozniak was raised by her grandparents on the Southside -- "on the S curve," she calls it.

"My little grandmother was just the sweetest person. She worked like a dog to take care of all of us," Wozniak said. "She had six sons that gave her a whole lot of trouble. I saw some ugly stuff growing up. I had an uncle that was murdered when I was 7. It was just a hard life."

When Wozniak was 11, Ira and Jessie Fuqua, who owned a grocery store on the Southside, took pity on the ragged, bare-footed child and offered her a job.

"You see how short I am? Well, imagine how little I was back then," she said. "They had to build me a little box to stand on so I could see over the counter."

Aside from two stints where she and her husband, Ted, operated their own restaurant in New Hope -- "we cooked the old food, with all the good stuff that everybody says you're not supposed to eat now" -- Wozniak spent almost all of her 60-plus years in the grocery business working in the meat departments.

During those six decades, she worked at grocery stores that no longer exist -- Jitney Jungle, A&P and Big Star -- before going to work at Kroger when it opened where the Columbus Police Department is today.

"She's become kind of a morale-builder for the store," Sanders said. "She's a very positive influence. She always comes in with a smile on her face and ready to work."

Wozniak says she encourages her co-workers to do the same.

"I tell the checkers that as soon as the customer walks up, you make eye contact and talk to them," she said. "They forget to do that sometimes, so I remind them."

Wozniak represents a major trend in the workplace.

The Wozniaks had three children, seven grandchildren and eight great-grandchildren. They live in their home in New Hope with a daughter and two grandchildren, the elder having just won Most Beautiful at Ole Miss last week -- which anyone who darkens the threshold at Kroger likely knows by now.

She still drives and is still driven. Her work keeps her engaged, but as much as anything, she works because she believes she has something to share with her young co-workers.

"I've had a good life," she said. "I can't say but what I've had to do in my life has helped me learn to appreciate what I have. Maybe I wouldn't have appreciated things if I hadn't grown up so hard.

"That's what I want young people to know," she added. "Maybe I can show them. I walked to work when I was 11 years old. I believe young people need to work and make their own money and not have to depend on anybody. At the end of the day, you can't blame the kind of life you have on anybody else. It's up to you."