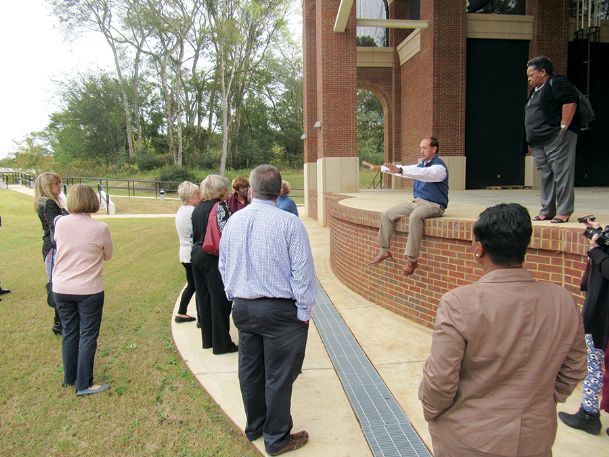 City engineer Kevin Stafford provides details of the plans for the Terry Brown Amphitheater during a tour of the facility Tuesday morning. City officials hope the venue will be ready to for its first event in spring 2020 as they await $2.5 million in funding needed to complete the project. Photo by: Slim Smith/Dispatch Staff

Dorothy McClung Lewis of Columbus belts out a few lines from a song as a friend records her on a smartphone as "the first performer" at the Terry Brown Amphitheater on Tuesday. CVB and city officials provided a tour of the facility, which they hope to be completed by spring 2020.
Photo by: Slim Smith/Dispatch Staff

At roughly 9:30 Tuesday morning, Dorothy McClung Lewis moved to the center of the stage at the Terry Brown Amphitheater and belted out of a few lines of a song.

"We've got it documented that Dorothy was the first performer here," said one woman who laughed as she captured McClung's brief performance on her smartphone.

McClung was one of about three dozen people who toured the amphitheater as a part of the Columbus-Lowndes Convention and Visitors Bureau Tourism Partners meeting. City officials hope that by the spring of 2020, the venue will host its first paid performance.

"That's our goal," said Kevin Stafford, the city's engineer who has been working on the project since it began Phase 1 construction in December 2015, using $3.2 million in state bond money.

When completed, the amphitheater will have a seating capacity of roughly 3,500, Stafford said, including seating for 1,800 on a grassy area. There will be 1,100 hard-back seats, along with an area available for corporate use that will feature table and chairs, plus an area nearest the stage that can be used for additional temporary seating or standing room only, based on the events.

Also included in Phase 2 will be the perimeter fencing, restroom, ticket booths and concession stands.

Phase 1, which included the main stage, electrical/water/sewer and some concrete work, was completed in August 2017, but Phase 2 has been delayed after state funds for the projects were not provided during the last two legislative sessions.

Taking its cue from Rep. Jeff Smith, the House Ways and Means Committee chairman, city officials expect to receive state bond money this year, although Mayor Robert Smith said he did not know if the bonds would provide the $2.5 million needed to finish the project.

Smith said additional funds could be used to complete the project if the Legislature passes a new 2-percent restaurant tax in January's session.

The tax, which would replace the county wide 2-percent restaurant tax that expired in July, would generate roughly $2 million annually for tourism and economic development. As part of the joint resolution between the county and the city that will be used to craft the legislation, $400,000 annually would be provided to the city for parks and recreation.

"We are going to be talking to our local legislative delegation about both the bond money and the 2-percent money," Mayor Robert Smith said. "We know there is going to be some bond money to help complete (the amphitheater). We don't know if we'll get the $2.5 million we need, but if not, the plan is to use some of the 2-percent money, which would be more than enough to complete the project."

Smith said he favors funding both the completion of the amphitheater and renovations at Propst Park at the same time.

"Kevin and I have discussed that once the 2-perent (tax) is reinstated, we'll go before the city council and ask for a general obligation bond for $5.2 million to complete this project and Propst Park and do it all at the same time," he said.

While no work has been done on the amphitheater since August 2017, the city did purchase a 1.4-acre parcel just south of the amphitheater, which has been cleared and used for additional parking. Smith said the city purchased the parcel for $90,000 from Guy Richardson.

"He was getting ready to sell the property, so we decided to go ahead and purchase with general fund money," Smith said.

Smith said those were the only city funds that have been spent on the property.

"They haven't taken an official action of that," Smith said. "But I do know they've been discussing that as a possibility."

Stafford said that he has worked with Red Mountain Entertainment, a venue management consultant, through each stage of design and construction. Stafford said that Red Mountain had originally expressed interest in managing the venue, but cannot pursue that plan because of a non-compete clause the company has with the Tuscaloosa Amphitheater.

"We had quite a few venue management consultants who have said they are interested," Stafford said

3. Sanders steps down as supes president, does not resign COLUMBUS & LOWNDES COUNTY

5. Supes grapple with how to move forward with Sanders still on board COLUMBUS & LOWNDES COUNTY