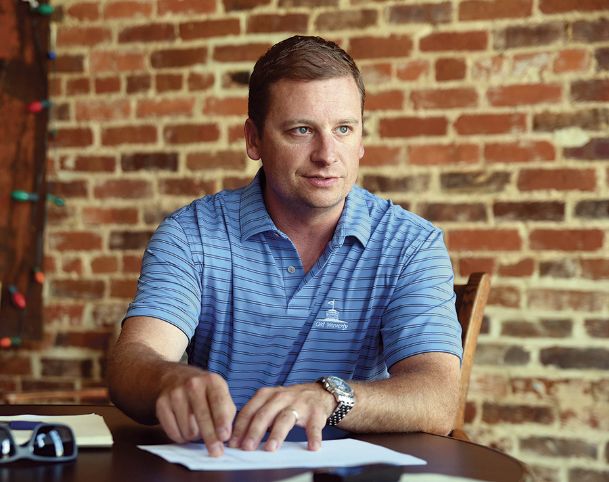 Matt Bogue, co-chair for the Lowndes Community Foundation, outlines five key focus areas for Columbus and Lowndes County during an interview at The Dispatch on Friday. The foundation formed a steering committee broken into task forces centered on poverty, education, community engagement, crime/addiction and leadership vision for the future. These task forces are the next step in a process that started with the foundation's community conversation in March where roughly 200 people attended. Photo by: Deanna Robinson/Dispatch Staff

Building a better community, according to Matt Bogue, starts with supplying nails to the people with hammers.

Lowndes County Foundation has the nails -- in the form of grant funds it hopes to invest in community causes, as well as the willingness to organize a collaborative effort in identifying and addressing community challenges. To the latter end, LCF has assembled a steering committee of dozens of community leaders to begin that process.

Enter the hammers, or at least some of them. This steering committee's job now is to help find more.

"(We have) people from business, people from education, people from social service, people from all walks of life," said Bogue, who is co-chair for the LCF board and vice president for Dutch Oil. "These are people who are engaged and very invested in Columbus and Lowndes County. It's a solid group."

Wednesday's roughly 90-minute session was the first of what Bogue hopes will be three meetings to identify tangible solutions in those key areas. He said each task force is asked to form its own "agenda" and report their findings next month to the full steering committee.

These task forces are the next step in a plan that began in March when LCF hosted a community conversation at Trotter Convention Center. About 200 community stakeholders attended that event, and their input helped shape the task force focuses and hopefully will help LCF find the most impactful ways to invest its funds.

"We're business owners, people who work and teach in the community, people who live here. Our kids play ball in the parks," Bogue said of the task force members. "Organizations are working on these problems and get hung up. What we're saying is, you tell us where you're running into dead ends and let us see where we can help you."

For Bogue, it's critical for the effort to recognize its mission as one that takes on the challenges ahead by creating a series of small wins, rather than trying to attack a broad issue all at once and getting overwhelmed.

"(For example) I think 'How do we solve the poverty problem?' is almost the wrong question," he said. "It's too big of a question. Instead, how do we take action in ways that reduce the impact of that issue? There are great organizations in the community trying to address poverty in Columbus. How does this task force plug in with those and bring those together instead of duplicating those efforts. ... That takes coordination.

"You can't look at the problems of crime or educational proficiency in Lowndes County as 'I'm going to address this (broad) problem,'" he added. "Let's drill that down a little bit."

None of the issues exist in a vacuum, either, Bogue said.

Education, for instance, was by far the area of highest concern in the March community conversation. But he said poverty and community engagement often influence a student's performance at school, outside of what the teachers, administrators or school board members can control.

"We can look at things like making sure all the students have computers so they can learn in a technology age," he said. "However, when those students go home, if they don't have internet because they are in poverty, that's a problem because then that student can't access the tools using that computer they were sent home with."

How exactly to do that, Bogue doesn't know yet. It could be a matter of equipping buses with hardware to broadcast the bandwidth and finding private property owners in underserved areas to agree to let the school district park a bus on their land a few hours each day. In any case, the task force plans to look at how other cities deal with that issue.

Drug addiction most often leads to crime, Shelton said. So, he would like to see stronger emphasis on drug courts for first-time offenders. He also wants to strengthen local churches who operate faith-based addiction treatment programs.

"We're good at arresting people for drugs, but what happens next?" Shelton said. "We need to do things that help get people off drugs and return them to being productive citizens."

An emphasis on K-12 education helps prevent crime and drug addiction, too, Shelton said, noting much of the state's prison population lacks a high school diploma or general equivalency degree.

"I like the holistic approach the Lowndes Community Foundation is taking here," Shelton said. "By combining these five key areas into a comprehensive plan, I believe it will work."

Narrative surrounding crime and public education in Columbus, he said, has been negative for years.

But he hopes LCF's effort also highlights what he believes is a wealth of potential and assets in the community.

Some, he said, are more readily obvious -- Golden Triangle Regional Airport, Columbus Air Force Base, the Tenn-Tom Waterway and close access to two universities and a community college.

Even the academically struggling CMSD, with its recent hiring of Superintendent Cherie Labat, has more positive buzz surrounding it than any time in the last six years, Bogue said.

"There's been so much bad news about education in this community, right or wrong, that there's been such a negative feel around it," he said. "What we really need is some good news, some wins. Let's get some positive momentum and I think the community will get behind it."

Some of the negative community narrative is earned, Bogue said. Much of it, though, is comes form "anecdotes that aren't entirely representative of reality."

"We always gravitate toward the bad," he said. "Things aren't that bad. We live in a great community."

Colin Krieger, a Re/MAX Realtor serving on the community engagement task force, sees that, too.

Krieger wants his group to attack community apathy, drawing from the positives in Columbus and Lowndes County to inspire more residents and business owners to become more involved.

"We're often our own worst enemy with our narrative, when in fact, Columbus is a lot better off than many other communities," he said. "Economically, we're growing."

LCF's effort is not exactly the first of its kind, Bogue admits.

Other groups over the years have tried to attack these problems, individually or collectively, with varying success. When the efforts fail, Bogue said, it's often due to an overwhelmingly broad focus and a lack of support.

He knows some view LCF's task forces with similar skepticism.

"I understand that attitude. What often happens is you try to get into something with noble intentions, and then you realize 'I can't get anything done' and it shrivels and dies," Bogue said. "So you have people who are jaded from previous experience so their expectations are relatively low.

"There are generations of brilliant people who have tackled these problems, and yet they still persist," he added. "It doesn't mean they didn't do their job or do a fantastic job. What it means is these are very complex issues. Solving them is an overwhelming task. But hopefully, we can leave our community in a little bit better place for the next generation than where it was when we inherited it."

Ultimately, though, these are community problems, he said, and the citizens have to take responsibility for addressing them, even in small ways.

"Maybe, in 10 years, we'll look back and say 'Man can you believe where we were back then?'" he said.