Logan: Parks and recreation an economic driver for Starkville 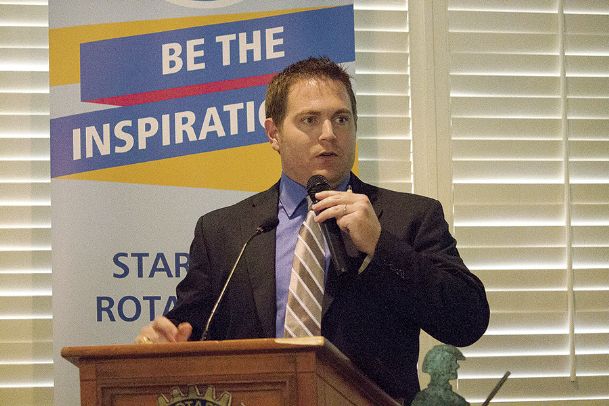 Starkville Parks and Recreation Director Gerry Logan talks about his department to the Starkville Rotary Club. Logan talked about parks and recreation's impact on Starkville. Photo by: Alex Holloway/Dispatch Staff

Starkville Parks and Recreation Director Gerry Logan sees his department's role as being about more than just cutting grass to keep the parks looking nice.

Logan, who was recently appointed the department director, spoke to the Starkville Rotarians on Monday in Starkville Country Club. He said parks and recreation play a crucial role in generating an economic impact for the city. To emphasize that, Logan pointed to recent tournaments that have attracted hundreds of teams and thousands of people to Starkville.

"Parks and rec is an economic impact driver," Logan said. "We host tournaments. We host events. We contribute to the economic development of the community. We deal with quality of life issues. We have sidewalks and areas for people to walk. We have a free walking track at the Travis Outlaw gym.

"It's not just about cutting grass and going to the parks late at night," he later added. "It's about contributing to the ... soul, if you will, of the community."

Starkville Parks and Recreation operates about 200 acres spread across seven parks. Logan said the department has recently pushed for facilities upgrades, such as the installation of a new playground and disc golf course at J.L. King Park and new soccer goals for the Sportsplex.

With Starkville's board of aldermen recently a more than $400,000 budget increase for the parks department for 2019, Logan said more projects are on the way for his department. He said, in response to a Rotarian's question, the department is starting to look toward future needs laid out by its comprehensive plan.

"What the comprehensive plan said we needed is certainly some additional field space," Logan said. "That's proven. We are certainly short on field space, particularly diamond field space -- baseball and softball fields. It also noted we have a lack of multi-use trail. Those are things we need and it's certainly our goal to get there."

In response to another question, Logan also mentioned the city has, for now, stopped pursuing an acquisition of 50 acres south of the Sportsplex in favor of looking at a new tournament facility at Cornerstone Park on Highway 25. However, Logan said the city is aware of a need for efficiency improvements at the Sportsplex.

"As part of this new process, with any new facilities that come on we're also going to look at renovating the Sportsplex," he said. "A second entrance has certainly been talked about. It's challenging because of the creek and overall layout of the land, but with any potential discussion of new facilities and a new park, the second part of that is renovating the Sportsplex to make it as efficient as it can be -- parking, access roads, things like that."