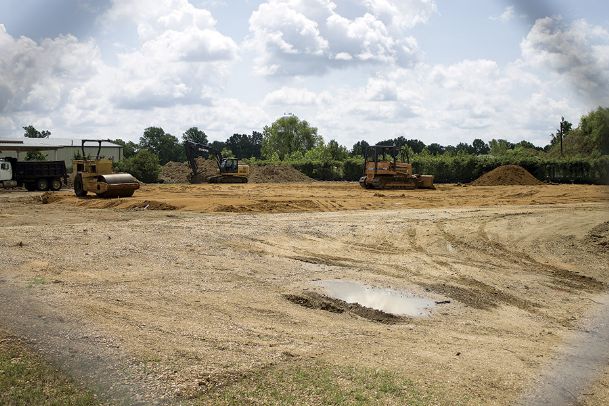 Early work has commenced at the site of an Oktibbeha County storm shelter at the Lynn Lane-Industrial Park Road intersection in Starkville. The project, which has been in the works for years, is expected to be finished next year. Photo by: Alex Holloway/Dispatch Staff

After years of effort, Oktibbeha County has started construction on a long-awaited storm shelter.

Early dirt work is underway at the shelter's site, at the intersection of Lynn Lane and Industrial Park Road in Starkville. County Administrator Emily Garrard said the project is currently expected to be completed in the late spring.

The storm shelter is a dome structure that will be 8,756 square feet, with 7,915 square feet of usable space. It will be able to accommodate 1,582 people and is designed to withstand winds of up to 250 miles per hour.

The total project, including a planning and site survey phase the county has already completed, is about $2 million. Federal funds have paid for much of the project, accounting for $242,802 of the $269,780 for the planning phase. A Federal Emergency Management Agency grant is paying for about $1.44 million of the $1.85 million needed for construction, with the county contributing the remaining $412,919.

"I think to get the type of building for the amount of money the county is putting in is a win-win," Trainer said. "That's a $2 million building and we're paying a lot less than that. I think it was too great of an opportunity to pass up."

Trainer also said he thinks the shelter, which is being built on a piece of county-owned land near a workshop for its road department, is in a good location. The shelter will be near both McKee Park and the Starkville Sportsplex, and there's a heavy concentration of apartment complexes further east on Lynn Lane.

"There may be an athletic event at a park where people need to find shelter quickly," Trainer said. "There's a lot of bodies in that area in the spring and the summer, from time to time, with all the parks over there."

While the building's primary purpose is as a storm shelter, it will be available for use as a multipurpose facility. Trainer said it could, for example, be of use as a place to host activities for the Boys and Girls Club, which is located a few hundred feet away on Lynn Lane.

Still, there are some limitations. Emergency Management Director Kristen Campanella said the facility won't have showers and is intended as a temporary safe room during storms, rather than an overnight or otherwise long-term shelter.

Earlier in the week, when supervisors asked Campanella about a "Katrina-like" disaster situation where the shelter might be forced to hold people, she said that still may require outside clearance.

Oktibbeha County has been planning for or working toward the shelter for about five years. Early planning for the project started under former County Administrator Don Posey, who retired in December 2013, and former Emergency Management Director Jim Britt. Officials emphasized the project more after a deadly tornado devastated Louisville in April 2014.

Since then, the county has completed the initial property study work, until FEMA awarded the grant for the project in November 2017.

The safe room was also initially conceptualized as 20,000 square feet, with room for about 4,000 people. A project at that size, according to estimations when they were floated in 2014, would cost about $3 million.

Trainer said it's taken a long time for construction on the structure, which is Oktibbeha County's only county-owned safe room, to begin. Despite that, he said he's proud to see the work underway and thanked the officials who led the way.

"It wasn't easy," Trainer said. "There was a lot of behind-the-scenes activity. I give a real tip of the hat to Ms. Garrard and Mr. Posey and Mr. Britt. We're excited about it, and hopefully, it will be a benefit to the county for many years to come."