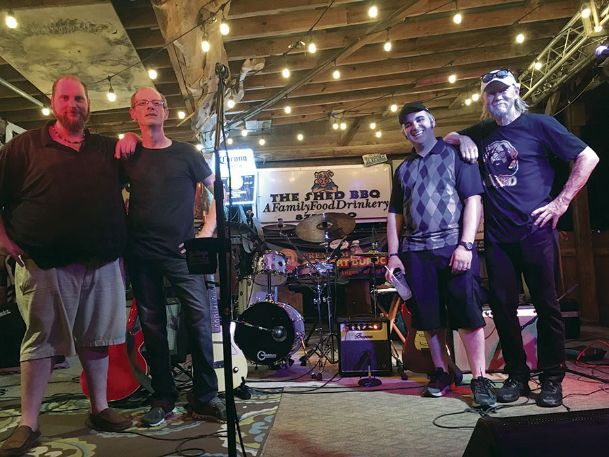 Stormy Monday band members, from left, Zac Ashmore, Drew Dieckmann, John Gholston and Barney Davis pose at a gig earlier this year. The Starkville-based blues band is slated to perform Thursday at the Columbus Riverwalk for the city's 11th annual Sounds of Summer concert series. The show will be the band's 100th performance since Stormy Monday began in 2013. Photo by: Courtesy photo

Last fall, members of Starkville-based blues band Stormy Monday left a gig mad at their performance -- not because they hadn't pleased the crowd but because they knew they could do better.

"I think we were all disappointed," said John Gholston, the band's guitarist and lead singer. "We were looking back and saying, 'If we can't do any better than that, we just need to find something else to do.'"

Gholston described the moment as a turning point.

"A couple weeks later, we had another show and really played well, with a lot of power and presence," he said. "We walked away from that show, after the bad one, saying, 'We did it right this time.' From that point on, I think we've found ourselves."

Stormy Monday is slated to perform Thursday from 7-9 p.m. at the Columbus Riverwalk. Gholston said the show is special for several reasons.

It will be the band's second appearance at the city's free Sounds of Summer concert series. It marks the quartet's 100th gig since members played their first show at Starkville's Rosey Baby's in May 2013. And concert-goers are sure to see "the best Stormy Monday that's ever been."

"The foundation was there last year, but we've absolutely taken it to a new level," Gholston said. "We've figured out each of our strengths, and we've figured out how to put all the pieces of the puzzle together."

Since Stormy Monday's beginning as a blues cover band, the four-member ensemble has welcomed new musicians and released an original album titled "Have Blues, Will Travel."

"The nicknames are just us being silly," Gholston said.

Gholston is Stormy Monday's only remaining original member. Ashmore joined March 2014. Dieckmann replaced founding member Brian Malone in May 2017. And Davis is the newest addition as of January 2018.

Davis, a Starkville native, has played music "off and on" since about 1965 -- through high school, through college, in Nashville and now into his retirement, which began in 2013 when he moved back to Mississippi.

Davis said he's played everything from rock and blues to jazz and bluegrass, and had filled in for former Stormy Monday bass players on occasion before the group asked him to officially join earlier this year.

Feeling deeply, Gholston said, is what the blues is all about.

"At its core, the blues is a fairly meat and potatoes form of music," Gholston said, "but it's got an element that not everyone can grasp. The main element of blues is soul, it's feeling. It's digging down deep inside yourself and pushing the emotion you have into the music."

Thursday, Stormy Monday will play about half original songs, mostly from its 2016 album, and some blues covers. Gholston said Stormy Monday plans to record its Sounds of Summer performance. If it goes well, he added, the band may produce a live album.

But that won't be the band's main goal.

Gholston wants Stormy Monday to walk off stage Thursday worn out, "having left people with a feeling they just saw something they'll never forget."