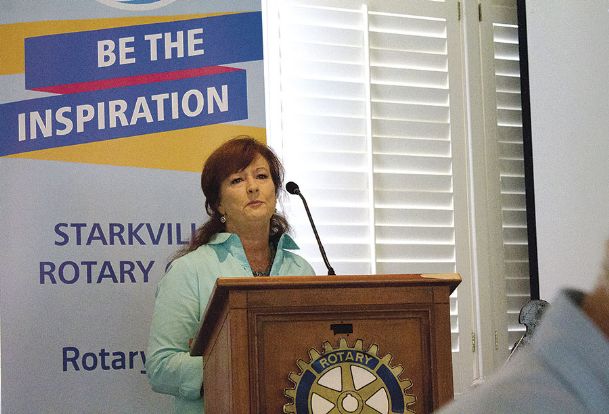 Therapy can take many forms, and Lori Irvin told Starkville Rotarians that working with horses can offer a sort of healing for some patients.

Irvin, an Extension associate with Mississippi State University, works with the Extension Equine Assisted Therapy Programs. During Monday's meeting at Starkville Rotary Club, she focused on the programs the university offers for children and veterans.

The therapeutic riding program is primarily housed in West Point, but Irvin said it does some activities at the Mississippi Horse Park in Starkville.

The program for children serves those with developmental disabilities, autism, ADHD and other conditions, Irvin said. She said the program once also served adults but has recently become child-focused due to high demand.

Through the program, students learn to care for and ride horses. Irvin said that interaction helps with learning empathy and creates a passion for animals. From that, she said, students can build self-confidence.

"They're not just coming out, riding and having a good time," she said. "We're trying to incorporate their learning goals. Social skills, motor skills, balance, coordination. A horse stimulates your nervous system something like 60,000 times a minute. There's no way that can be replicated in any other kind of setting."

As an example of the program's successes, Irvin spoke about one student with a mitochondrial disease who hadn't slept in nearly a week. The student's mother contacted Irvin after a therapy session and said her daughter slept for 18 hours and the program made "all the difference in the world."

Another student, she said, wouldn't speak often before therapy. During therapy, the student trotted around an arena with a horse. Irvin said that student's mother contacted her and said the child spoke her first complete sentence after therapy.

"She said 'I am so amazed and thrilled with this program,'" Irvin recalled. "I was like, 'That is just the healing power of the horse.' It's just that powerful."

A veterans-focused program is also available. Irvin said it has similar goals -- building empathy, self-confidence, helping to build strength. Veterans don't have to ride the horses if they don't want to -- Irvin said they can groom the horses or work with them from the ground.

Irvin said it's a more private setting, where veterans can talk to their horses without fear of being judged.

"It's peaceful and calm out there," she said. "I don't have volunteers out there simply because it's disruptive and I don't want them to feel like anybody's taking notes or watching them or going to tell anything that they said."