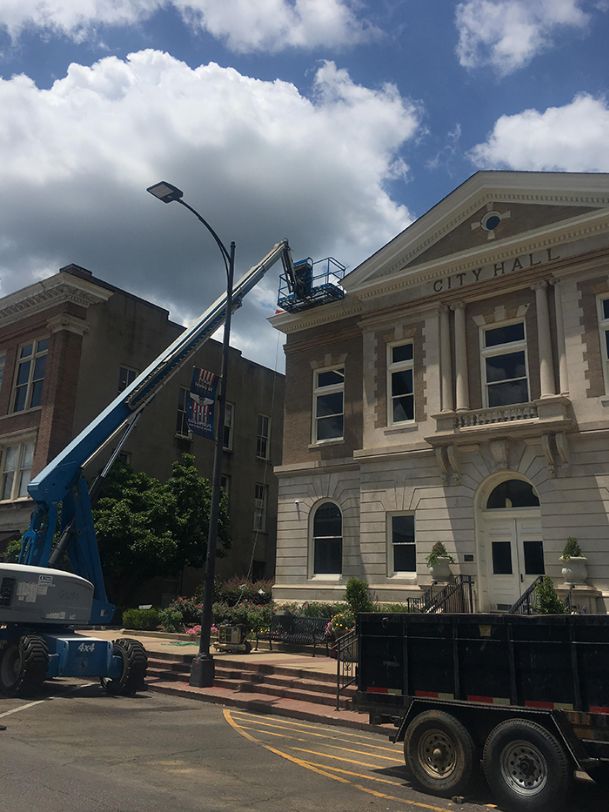 Hannah Greco/Dispatch Staff Construction continues for roof repairs on the recently renovated City Hall. In May, the council accepted a bid of $12,440 from Columbus-based Copper Top Construction after leaking was discovered.

Despite a $2 million renovation to City Hall completed just last year, the city of Columbus is now paying for roof repairs that began this month.

In May, the Columbus City Council approved a low bid of $12,440 from Columbus-based Copper Top Construction to repair roof leaks at City Hall.

The original renovation project was funded by the Community Heritage Preservation grant through the Mississippi Department of Archives and History (MDAH). Meridian-based architecture firm LPK Architects oversaw the project in partnership with J5. The project aimed to restore the 115-year-old building to its original condition.

Improvements on infrastructure as well as interior and exterior updates took place in two phases from October 2015 to April 2017.

Then, in April of this year, the roof started leaking.

"I was advised by the project manager that the architect told us the roof was OK. ...That wasn't the case," Armstrong told The Dispatch. "If this is true, I'm not very happy about that."

The repairs on the roof began in mid-June. The construction includes fixing the spots where the leaks were noticed, as well as replacing the shingles before other areas start to leak.

"They found it was a gutter issue and the shingles had about six years left on them so the city decided to redo it now," Jabari Edwards, owner of J5, told The Dispatch. "It just made sense to replace the shingles, as well."

The key-players of the near-20-month rehabilitation project of Columbus' historic City Hall, which includes LPK and J5, earned a Mississippi Heritage Award for Restoration at a ceremony in Ocean Springs June 7. The honor was presented to Columbus Mayor Robert Smith at the Listen Up! Historic Preservation Conference and Heritage Awards. Edwards told The Dispatch that MDAH representatives inspected the building alongside John Olsen, the LPK architect involved with the project, prior to beginning the renovation.

"They were the only ones in the inspection process," Edwards said.

Olsen, when contacted by The Dispatch, said he wasn't aware of any repairs at City Hall.

"I am not aware of (the leak) going on and I will not comment (further) until I know more about the situation," Olsen said.

Smith did not respond to calls from The Dispatch by press time.

Ward 3 Councilman Charlie Box does not believe any harm or negligence was intentional by the original architects. He said between the age of the building and the concealed nature of the roof damage, it would have been easy for the architects to miss.

"I don't think it was overlooked," Box said. "... Sometimes things just happen in old construction that you can't see."

But Ward 2 Councilman Joseph Mickens said he believes LPK should be pay for the roof repairs.

"That was one of my questions from the jump: Why are we paying for this when we just moved in a year ago?" Mickens said. "The ball is dropped somewhere. I think the company that missed it ... we should go after them."

"I don't know if anybody could have known this unless they took the whole roof off and inspected it and did an estimate," he said. "... If it were negligence I would say yes, but in this case I don't think there is."

Further, Box said, if the city tried to pass on roof repair costs to LPK, and the company sued, it could prove more costly for the city.

"If they wanted to litigate it, you'd have so much in legal fees that it wouldn't be worth trying to do that," he said. "You might lose and owe more money than it's worth. Sometimes it's best to just pay it out of pocket."

"We did the major renovations and then we had this leak, which is not good, but I don't think it was overlooked," Gavin said.

Despite how he feels about the expenses, Mickens says his main concern is fixing the leak.

"We are trying to rectify the problem and we hope the expense isn't too bad," he said.

3. Possible illegal recordings, child exploitation claim at center of teacher's fight to get her job back COLUMBUS & LOWNDES COUNTY