Headed for the exit: Teacher turnover numbers increase for CMSD; improve in Starkville and Lowndes County 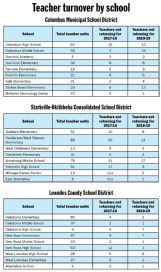 By Zack Plair and Mary Pollitz

Roughly one-fourth of teachers who worked in the Columbus Municipal School District in 2017-18 will not return this August.

According to documents CMSD supplied The Dispatch in response to a Freedom of Information Act request, 64 of its 257 certified teachers had not renewed contracts by the end of the school year, either due to retirement, because they opted not to renew their contract or because the district chose not to offer them a new contract. Those numbers do not include administrators or support staff.

CMSD's teacher turnover figure is up from 2016-17 when it lost 48 certified teachers.

"There's not a blanket reason (teachers are leaving)," said CMSD Superintendent Cherie Labat, who was hired in June. "Sometimes teachers have kids. Sometimes they leave the profession. I don't think there's any difference with our teacher turnover than other districts. I just know there's a shortage throughout the state."

Three of its campuses -- CMS, Cook Elementary and Franklin Academy -- received accountability ratings of F from the Mississippi Department of Education in October, ratings based predominantly on students' performance on state benchmark exams the year before.

Then in February, the school board fired fourth-year Superintendent Philip Hickman a few months before his contract was set to expire, an event that launched the search that has now brought Labat to CMSD's helm.

Now, Labat said, she is trying to transform the culture in the school district to one more effectively focused on student achievement. That change starts at the top, and she said she also has tasked her building-level administrators with generating higher teacher morale that can lead to better retention.

"It's about being a student-oriented and teacher-oriented culture, making sure they have the resources they need and making sure they feel valued," Labat said. "That's part of what I've tried to discuss with my principals. The deal is, I take care of you as principals, so you take care of teachers and kids. That's what I'm here for, to make their lives easier, provide them with support at the building level and then they will be able to provide support to the teachers and students.

"Any researcher can tell you that school's and their accountability is contingent on leadership," she added.

Beyond that, CMSD is taking other measures to shore up teacher recruitment and retention. Labat said she plans to work with Mississippi State University and the Mississippi University for Women as a way to identify and recruit strong applicants. She also is opening up more professional development opportunities for teachers.

A recently board-approved incentive program -- which will offer bonuses beginning in 2019 to teachers and support staff at campuses that improve their accountability ratings -- should also help retention and morale, Labat said.

"Sometimes people just need to feel hope and encouragement, but the talent is there," she added.

Starkville-Oktibbeha Consolidated School District has lost 136 teachers over the last two school years, though turnover numbers are trending in the right direction.

Documents SOCSD provided The Dispatch show 57 of the district's 373 certified teachers who worked there in 2017-18 will not return in August. That represents a turnover rate of just more than 15 percent. In 2016-17, the district lost 79 of its teachers, according to the documents.

More than half of the exiting teachers in 2017-18 left the district's lowest performing schools -- including 17 at Armstrong Middle School, which has a D accountability rating; and 13 at Henderson Ward Stewart Elementary, which is the district's only F-rated campus. Additionally, four AMS and three HWS teachers transferred to other campuses in the district.

Eddie Peasant, who completed his first year as SOCSD superintendent on June 30, said he is encouraged to see turnover numbers improve year-over-year -- especially at HWS, where 20 teachers called it quits in 2016-17.

He noted a number of factors that could cause teachers to leave. For one, SOCSD sees many recent college graduates who work there for a few years and move on to other districts. In other cases, teachers move when their spouses take jobs in other communities.

Sometimes though, Peasant said, it's a matter of "fit."

"Some of those we asked to leave," she said. "... I just want to say, as a parent, you should hope that if we have teachers that selected this profession ... we've been monitoring them and offering feedback and trying to help them grow. We've encouraged them to grow and we've made suggestions. And if this is not working for them, they can select another pathway."

Peasant, along with AMS Principal Julie Kennedy, acknowledged middle schools, in general -- not just in Starkville -- are systemically prone to higher turnover.

In Mississippi, for example, teachers earn either elementary (K-6) or secondary (7-12) certifications. Sometimes, Kennedy said, teachers with either certification find it more difficult in the middle grades (6-8) and discover their niche at either the elementary or high school levels.

"I think understanding adolescents is a big deal, too," Kennedy said. "... The adolescent time (for the students) is a whole new learning experience."

A middle school task force MDE has recently formed will hopefully address some of those issues, Peasant said, specifically in generating more interest from teacher candidates in the middle grades and also providing more specific training on how to more successfully educate that age group.

Another key element for reducing middle school turnover could come from SOCSD's planned Partnership School at Mississippi State University, which will house grades 6-7 and be a training ground for MSU's education students. It could open as soon as the 2019-20 school year.

District-wide, both Peasant and Maulding noted the district's aim to create a supportive culture for teachers, citing a mentor teacher program that pairs more experienced faculty with new teachers for support, and placing lead teachers at each campus whose jobs are -- instead of classroom teaching themselves -- communicating with classroom teachers and helping them with planning and teaching resources.

"Teachers have to feel supported," Maulding said. "So we are trying to develop safety nets, support and fun. (They) are with us more in their awake time than they are (at home). So we need to have that in place so that they want to be at work and the things they have to do don't feel so burdensome."

Teacher turnover in Lowndes County improved in 2017-18, compared to the previous year, with only 30 of its 420 certified teachers (about 7 percent) not slated to return in August.

Robin Ballard, assistant superintendent for LCSD, said the district's turnover rate averages about 10 percent each year. Much of that comes from teachers retiring, she said. Other times, it's athletic coaches leaving for other jobs and taking their assistants, who are also teachers, with them.

She attributes the district's relatively low turnover to its academic rating -- MDE rates it as a B overall -- as well as administration "giving credit" to the teachers for that success.

"Our district has continued to get better and better, and that's just because of the entire team effort that's moving forward, and I think that's what helps us keep our teachers from having a lot of turnover," Ballard said. "We value our teachers and give them the praise and glory for the jobs they do every single day.

"We try to give our teachers the support they need so they can focus on teaching," she added.

One area where Ballard said the district has seen the most success on this front is its mentor teacher program, which just completed its fourth year. The district pays extra to experienced teachers who agree to mentor first-year teachers. As those new teachers gain experience, then they have an opportunity to become mentors.

"We try to pair them up with the same grade, either in close proximity or content," Ballard said. "So they have a certain number of hours that they have to do it. A brand new teacher has a different number of contact hours (with a mentor) than a teacher that's just new to the district. If we have 40 new teachers, we try to have 40 mentors."