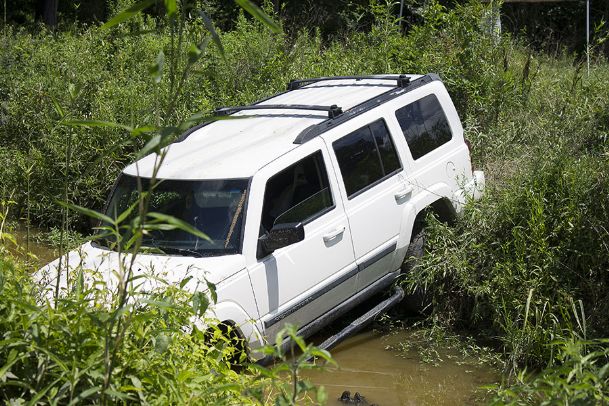 Victoria Hudson's car rests in a creek in southwest Clay County. First responders from multiple counties were involved in a multi-day search for the missing Oktibbeha County woman. Photo by: Alex Holloway/Dispatch Staff 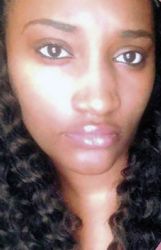 A relieved, but exhausted Glenda Hudson, right, whose daughter, Victoria, was found safe more than two days after a car crash in Clay County, talks with Victoria's cousin, Santita Word of Tuscaloosa, outside the emergency room at North Mississippi Medical Center in West Point Saturday. Victoria Hudson was being treated for dehydration being held for observation Saturday after her ordeal.
Photo by: Slim Smith/Dispatch Staff

Victoria Hudson has spent the last two-plus days sleeping in deer stands and drinking rainwater from a creek as she wandered in a wooded area in Clay and Oktibbeha counties trying to find her way out.

At about 10 a.m. Saturday, first responders who had been searching for the 23-year-old for much of 53 hours since she went missing found her dehydrated, disoriented and alive.

Clay County Sheriff Eddie Scott said Hudson was found safe in the woods near the Cedarbluff community in Oktibbeha County, about a mile from where her vehicle wrecked early Thursday morning off Mhoon Valley Road near Highway 50 in southwest Clay County.

Hudson was taken to North Mississippi Medical Center in West Point for treatment, where her relieved mother, Glenda Hudson, got the chance to hear what happened from her daughter's mouth. After Victoria is hydrated and checked for significant injuries, she will most likely be released.

"She's resilient. She's tough," Glenda said of her daughter. "She had some scratches from walking in the woods and being bitten by insects. She said she had been walking back and staying at night at a deer stand. She had been drinking rainwater and creek water. She said she found some berries, but she didn't like them. So really, she didn't eat anything.

"When people tell you they don't know what happened to your child, that's the hardest thing. It's difficult to explain," Glenda added. "I could never, never think (she hadn't survived). My child is my life. Her existence is my existence."

Victoria, a forensic science major at Ole Miss, was driving to her mother's house in Pheba early Thursday morning when her car left the roadway and crashed into a ditch almost 1,200 yards from Mhoon Valley Road.

"She just got turned around," Glenda said. "It was at night and it was raining and she made a wrong turn and wrecked."

Authorities said Victoria twice called 911 for assistance, the first call coming at about 3:40 a.m., and she was connected with Oktibbeha County's emergency dispatch. She stayed on the line with a sheriff's deputy until 7:33, when her cell phone lost power. It took a Tennessee Valley Authority helicopter to spot the car from the air, but by the time first responders arrived to the place where the car sat nose-down in the ditch, Victoria was gone.

The ensuing search, which involved responders from Clay, Oktibbeha, Lowndes and Noxubee counties, continued until dark Thursday and resumed at daybreak both Friday and Saturday.

Though Scott said Victoria was "in fairly good shape," he noted she is lucky to be alive.

"In those elements, not just the heat, but the conditions of the land out there, it's remarkable," Scott said. "Most grown men couldn't survive that well after being out there for two whole days."

During the search, Scott said, authorities found evidence Victoria had been moving around the area. With so much commotion in the woods, he said he was surprised Victoria wasn't located sooner.

"I'll put it like this. We had up to 50 people in the woods, an airplane, two helicopters, horses, four-wheelers and a drone," Scott said. "How she missed some of that, or some of that missed her, is hard to explain."

Authorities have interviewed Victoria, Scott said, and she confirmed with them the same details she told her mom.

Scott: 'We're glad it turned out the way it did'

As many as 60 of Victoria's family members stayed off-and-on at a church near the search site during the ordeal, waiting for updates and trying to stay positive.

Some, like Victoria's cousin Santita Word, 34, of Tuscaloosa, Alabama, had to keep themselves from fearing the worst.

"It's been tough, not knowing where she was. Was she hurt? Did someone hurt her? We're grateful that there wasn't anything or anybody else was involved. You never know," Word said. "It definitely showed us there are some good people out there. That community down there at Mhoon Valley really stepped up. They opened up their church doors for us, gave us food, drinks, snacks, checked on us. They prayed with us and for us. We're just thankful for all the people, the agencies. Everybody was outstanding."

Glenda said she is happy to see her child safe. On Saturday, speaking to The Dispatch, she even joked Victoria's experience might have changed her career path.

"Her major is forensic science, but after this, we don't know," she said laughing. "We might try to get her on one of those survival shows."

Scott, too, expressed thankfulness for what he considers the best possible outcome for the situation.

"We're just glad it turned out the way it did," Scott said Saturday. "Now I'm ready to take a shower and get a nap."