Pioneers in their field: Local women discuss their challenge-laden paths to success 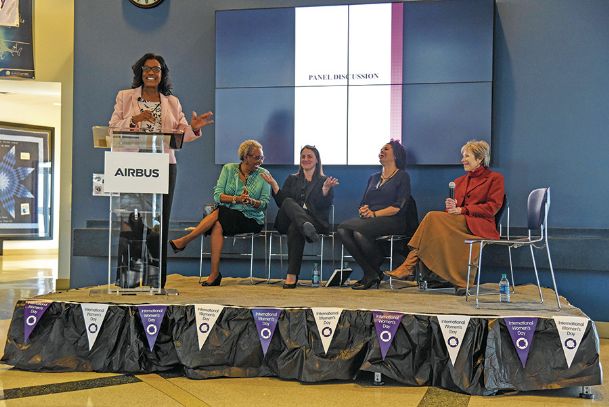 Judge Dorothy Colom began a program Wednesday at Airbus Helicopters with a folk tale about an old wise woman.

The woman, who was blind, had a reputation for wisdom that spread far beyond her little village. One day a group of skeptics approached the old blind woman, seeking to discredit her.

"The same can be said about what we as women can achieve," Colom said. "To a large degree, what we can do is in our hands."

Colom, who has served as 14th District Chancery Court Judge for 24 years, was part of a panel discussion held in honor of Women's History Month at the helicopter manufacturing plant in the Lowndes County Industrial Park.

Each month, Airbus present a program for its employees dealing with current topics.

Each of the women are pioneers in a sense, moving into roles that were then the almost exclusive domain of men. From their own experience, the women noted qualities that helped them in their journeys.

In her first job, Strenger was the only female in a building with more than 1,500 workers at Northern Telecom in Texas.

At 2 a.m. one morning, Strenger answered an urgent call from Disney World. Its voicemail system, which included all of the theme park's recorded messages, had crashed.

"The first thing he said was, 'Sweetheart, can you put an engineer on the phone?' When I told him I could help him, he hung up," she said. "He called back a few minutes later and said, 'I need to talk to an engineer ASAP.' I remember he called me 'Missy' that time. I told him, 'You can call me anything you want, but if you'll give me the opportunity, I'm going to help you.'"

What she told him next didn't help.

"I told him, 'What I want you to do is take the hard-drive out, find a Ziploc bag and put it in the freezer.' I can't tell you how many expletives came out of his mouth at that point, but I was able to fix his problem," she said. "I had found in the lab that there was a problem with hard-drives overheating. It just needed to be cooled down and it would be fine."

Strenger said that incident taught her an important lesson.

"I was defined by my voice before this individual ever knew what my capabilities were," she said. "Don't let gender define you. Don't let your background define you. You cannot allow others to define you by their misperceptions."

When Lakeisha Williams arrived at Mississippi State in 2003 to pursue a doctorate in biomedical engineering, she wasn't at all sure how long she would stay.

"I'm from New Orleans and I didn't know a soul," Williams said. "And I was the only female in my classes. So every day, I would call my mom and say, 'I'm coming home.' She would say, 'No, you're not.' That went on for weeks. I can honestly say that without that support, I would never have stayed, never have become the first female to get a (doctorate) at Mississippi State in my field, (and) never have become the first female faculty member in my department at Mississippi State.

"From that experience, I learned that having support is critical for women when they find themselves in a male-dominated field," she added.

Williams said she also discovered a dynamic that made her realize the support system for women does not always come from other women.

"What I found interesting is that the men were saying, 'Go for it and apologize later,'" she said. "But the women around campus were telling me, 'Tread lightly.' I understand that. At the time, that had been the experience of the women there. But, really, it was the message the men were telling me that helped me most. I needed to hear, 'Go for it.'"

Lynn Spruill: When 'no' is not the answer

When Spruill first considered going into the Navy, she was determined to be a pilot. The answer was initially a resounding "No."

"I didn't hear that word when I was growing up, and I sure didn't want to hear it from somebody when I was trying to get a job or when I wanted to be a pilot," she said.

Eventually, the Navy started an experimental pilot training program for women and began recruiting women who had aviation experience. Spruill, who had taken private flying lessons, was accepted into the program, graduating first in her in flight school class.

She was assigned to fly C-130 cargo planes.

When the Navy began another program allowing women pilots to fly non-combat supply flights to aircraft carriers, she was excited about the opportunity.

"But I had an admiral who said, 'She's not going to do that in my ocean.' So I switched oceans," she said.

Spruill transferred to Norfolk, Virginia, earned her carrier qualification and became the first woman to pilot a flight to an aircraft carrier.

"You don't take 'no' for an answer," she said. "There are great opportunities for women. First, you have to be prepared so that when that window of opportunity opens, you're ready for it. Then you have to push through the resistance. You push until the 'no' becomes a 'yes.'"

At the end of the year, Colom will retire from her position as Chancery Court Judge after 24 years. The landscape has changed dramatically since she arrived in Columbus to practice law 40 years ago.

"A the time, there were only three practicing female lawyers in (the) entire Golden Triangle," she said. "Now, there are over 40. Forty years ago, there was only one female judge. Now there are five."

Colom's message to women: Be persistent.

"Running for judge was not easy," Colom said. "In fact, I ran for judge three times before I was elected. When I first ran and lost, I had friends and family who discouraged me from running. But some people did encourage me. The decision whether I ran or not was in my hands.

"When I ran for chancery court judge, no other women were running," she added. "Now, there are at least five women running for the open positions on the chancery court. I hope running and my election 24 years ago empowered them to run."