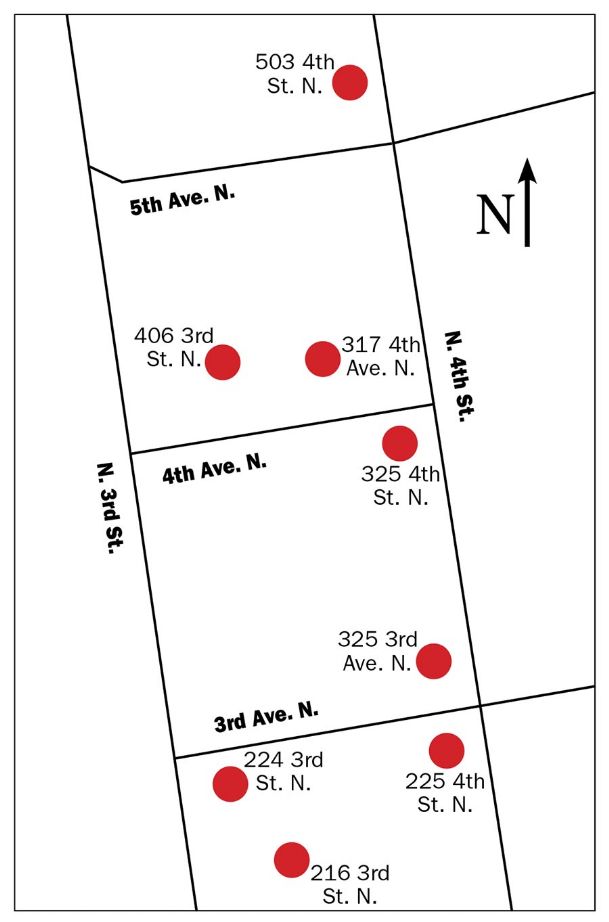 Pictured is a map of eight vacant houses in the Burns Bottom area of Columbus. The city plans to demolish the houses to help support an ongoing Columbus Redevelopment Authority project in the area. 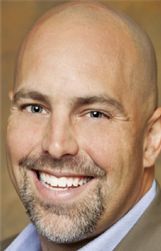 As part of a memorandum of understanding signed with the city, which the council unanimously approved, CRA will pay the city $2,000 per structure for demolition, as well mileage/fuel costs and all costs associated with disposing of the material.

The city, in turn, has agreed to tear down the structures within 30 days.

The CRA project area includes roughly 70 lots in Burns Bottom near downtown, all in a five block area between Third and Fourth streets that run north-to-south from Second Avenue to Seventh Avenue North. CRA is in the process of purchasing the lots -- most of which are vacant or contain low value or dilapidated houses -- to market the area as one tract for a developer to build higher-value housing.

As of late February, CRA President John Acker said the city council-appointed authority had purchased 21 lots, with five others expected to close soon.

The council approved in November issuing up to $3.2 million in urban renewal bonds for the project, which are backed a 2.5-mill ad valorem tax increase to be phased in over three years.

The council budgeted the first mill for this fiscal year. It plans to add 3/4-mills each for the project in fiscal years 2019 and 2020, and the tax will be retired after the bonds are repaid -- which Acker expects to take between 12 and 15 years.

For a property owner with a $100,000 home in the city without a Homestead Exemption, the 2.5-mill bump would amount to $25 in extra taxes per year.

So far, Acker said CRA has spent roughly $315,000 of the bonds. Once all the properties are acquired, he said what's left of the money will go toward structure demolition and infrastructure improvements.

"We feel very good about our progress to date and are confident moving forward as we work with the property owners in the area," Acker said in an email to The Dispatch.

City Attorney Jeff Turnage, who also represents CRA, told The Dispatch he wasn't sure if any of the houses were occupied at the time CRA purchased them. But if they were, he said, the residents were relocated.

Acker previously told The Dispatch most of the homes in the project area are already vacant or occupied by renters. There are only five owner-occupied homes there, he said.

The council on Tuesday also restored the Trotter Convention Center's closing time to 1 a.m. following almost four months of closing two hours early in the wake of a Thanksgiving morning fatal shooting outside the facility.

Cordell Deshaun Lewis, 27, of Columbus died at Baptist Memorial Hospital-Golden Triangle after being fatally wounded on Fifth Street just after midnight on Thanksgiving as a crowd was leaving a party held in the Trotter. Police arrested Undra Williams Jr., 25, on Dec. 15 for the crime.

After the incident, the council set the Trotter's closing time to 11 p.m. pending heightened security measures. On Tuesday after the vote, Mayor Robert Smith said the city has installed surveillance cameras throughout the Trotter, as well as along Fifth Street from Second Avenue North all the way to the Columbus Light and Water office.

Ward 2 Councilman Joseph Mickens, who supported restoring the Trotter's hours, asked Smith what the progress was on restoring hours at Premier Lounge on Southside -- where a Columbus police officer responding to a disturbance call at the club in early November shot and killed a reportedly armed man among the dispersing crowd there. The council set its closing time to 10 p.m. pending certain security measures.

Smith, in response to Mickens, said CLW had installed better lighting in front of the club, and now city officials are waiting for the club's owners to install surveillance on the grounds and lighting behind the facility.

In other business Tuesday, Turnage said the Mississippi Attorney General's office had rejected a draft of the inter-local agreement between the Columbus Convention and Visitors Bureau and the city on distributing 2-percent restaurant tax funds starting next fiscal year.

Per the agreement, the CVB board had agreed to distribute $400,000 annually from restaurant tax collections to the city -- including $300,000 for Propst Park baseball field upgrades, $50,000 toward the completion of the Sen. Terry Brown Amphitheater on The Island and another $50,000 to support four specified festivals.

Turnage said the AG's office rejected the agreement as written because it cited the incorrect statutes and presented a corrected draft for the council to approve, which it did unanimously.

Now, the corrected agreement must go back to the CVB board for approval and sent back to the AG's office.