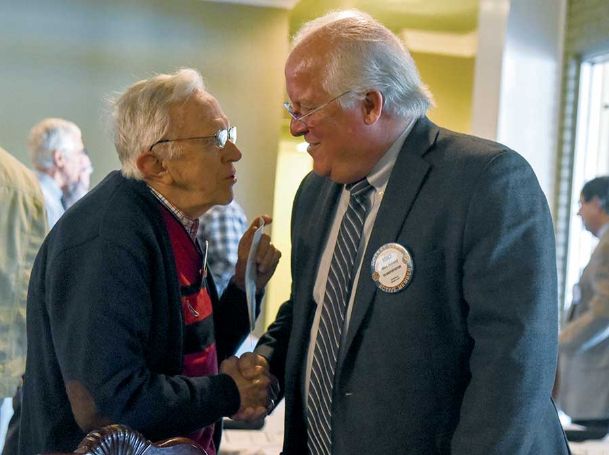 Business is booming at Golden Triangle Regional Airport, but that doesn't mean Director Mike Hainsey doesn't have a few concerns.

Hainsey, who spoke to the Starkville Rotary Club on Monday, said the airport is enjoying record success.

"Last month, we put more people on airplanes than any other October in the history of the airport," he said. "That was a big number -- we were running 90 percent full. ... This month, we're doing the same, which means we'll have another record month. We'll have a record November, if it continues."

The airport, situated in the heart of the Golden Triangle on Airport Road, just south of Highway 82 in Lowndes County, has also seen about $3.5 million in improvements in the last 18 months.

Hainsey said that work includes improvements to the commercial and general aviation ramps, as well as a taxiway renovation that should finish this week. GTRA is also replacing old ramp lightning with more modern, energy efficient lights and will do the same in the terminal.

Beyond that, the airport is planning a 4,000 square-foot expansion to the downstairs area of its terminal Hainsey said should begin next year.

"Our plan for the future is, as the airport grows, we'll have bigger airplanes and we'll need jet bridges so we'll move everything upstairs," he said.

Still, the airport, and air travel in general, will face some challenges. Hainsey said the limited number of airlines in the United States -- American, Delta, United, and Southwest -- has led to a reduction in capacity through mergers.

Beyond that, Hainsey said a looming pilot shortage poses an even bigger threat. In the next 10 years, he said, 26,000 pilots working for major airlines will turn 65 years old and have to retire due to hitting the mandatory retirement age. While he noted that includes pilots for shipping services such as FedEx and UPS, he said there's "no way" to make up for the loss of pilots.

"This is, for us in the business, the single biggest threat to air service at my airport," Hainsey said.

Small airports will suffer the most from the pilot shortage, Hainsey said. He said Tupelo, Hattiesburg, Meridian and Greenville have already lost major airline service. Meridian and Hattiesburg get federally subsidized one-per-day flights to larger cities, at the cost of millions of dollars per year to taxpayers. He said Tupelo and Greenville fly propeller airplanes to Nashville, Tennessee, which is also subsidized.

While GTRA has maintained its service through Delta, Hainsey said the pilot shortage's impact is already being felt in the airport's years-long effort to get westbound flights.

GTRA has been trying for five years to get service through American Airlines to Dallas. Hainsey said the airport has nearly $2 million in incentives, with the Golden Triangle's communities pledging up to $500,000, a grant from the state for $300,000, several hundred thousand dollars from the airport itself and a grant from the United States Department of Transportation.

The incentives, he said, are not the problem. Neither is the airport's ability to fill airplanes on a westbound route.

Pilot availability, however, is a problem.

"They told me they have no new markets out of Dallas this next year," he said. "They don't know if they can man their existing markets. They can't grow if they can't -- until it's sure what's going to happen with the pilot shortage. It's getting that bad."

Even so, Hainsey said American occasionally opens new routes, which gives him hope GTRA may yet still get a westbound route. However, he said it will have to come at the expense of a route somewhere else.