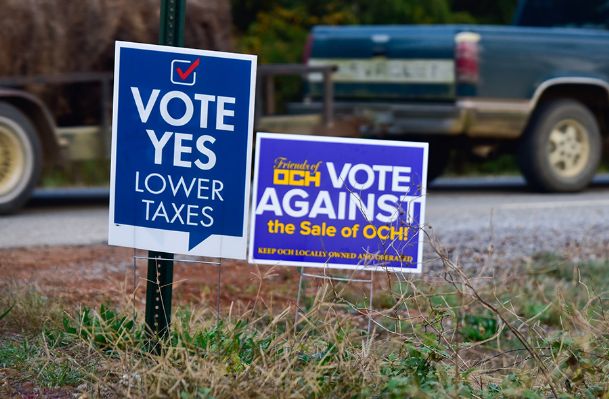 Signs for and against the sale of OCH Regional Medical Center are pictured on Turkey Creek Road in Starkville. While the "vote against" signs are funded by a registered political action group, organizations behind the pro-sale ads and signs have not properly filed with the Oktibbeha County Circuit Clerk's office. Photo by: Luisa Porter/Dispatch Staff

But neither she nor the two groups she purports to represent has registered as a political action group with the Oktibbeha County Circuit Clerk's office. Neither group has properly documented their campaign expenditures either, as required by state law.

Carol Stern, who lives in Ridgeland and operates C Stern Strategic Marketing in Brandon, purchased $5,112 in radio advertising from Cumulus Broadcasting in Columbus on behalf of two groups -- Nothing but the Facts and the Education Association of East Oktibbeha County Schools -- according to publicly available records at Cumulus' headquarters.

The funds bought five total ad spots -- two for EAEOCS that air on 106.1 FM that clearly target an African-American audience and three more general ads for Nothing but the Facts airing on 94.9 FM. All the ads aim to convince Oktibbeha county voters to support the sale of county owned OCH Regional Medical Center during a Tuesday referendum.

Two ad spots are running per hour on each station.

Stern is listed as the agent for Nothing but the Facts on Cumulus' documents, while Jacque Ellis is listed with the broadcasting company as the EAEOCS representative. But Stern, a marketing executive and political activist known for supporting "progressive causes" in the state, wrote one check for all five ads.

While a Cumulus representative did not specify how much each group's ads would have cost if bought separately, he confirmed the value each would easily exceed $200, the threshold set by state law requiring groups and candidates to file campaign finance reports.

Since Tuesday's referendum is countywide, the circuit clerk's office handles all filings -- including campaign finance reports and registering political action groups. As of this morning, Interim Circuit Clerk Angie McGinnis said Friends of OCH, whose members oppose the hospital sale, is the only political action group registered.

Nothing but the Truth has also sent out mailers supporting the sale, and "Vote Yes" campaign signs have popped up around the county with no discernible identity of their origins.

The Dispatch could not reach Ellis or Stern for comment. Nothing but the Facts did not respond by press time to several messages sent to its Facebook page.

According to Mississippi Code section 21-15-807, any candidate, political committee or individual that raises or spends more than $200 to influence an election are required to report their received donations or expenditures.

Mississippi Code Section 23-15-811 notes any candidate or other person who violates the provision can be convicted for a misdemeanor and face a fine of up to $3,000 and up to six months in jail. The statute further notes any candidate or political committee that fails to file the reports "may be compelled to file such statement or report by an action in the nature of a mandamus," or order by the court.

McGinnis said she's received several calls, particularly about Nothing but the Facts.

"I don't know what's behind them or anything about them," she said. "I've just started referring people to the Attorney General's office."

The Mississippi Attorney General's Office declined to tell The Dispatch if it has received any complaints about either group.

One ad airing on 94.9 targets hospital CEO Richard Hilton and OCH's financial condition. The ad references a reported $5.1 million loss and questions why Hilton should remain in charge of the hospital.

Another claims the sale of the hospital will get a $35 million bond tax burden "off our backs" and the sale will let residents "cut our own taxes," a reference to two bond issues voters previously approved for the hospital that a sale would more immediately retire.

Two ads playing on 106.1 seem to target African-American voters. Both, which run as gospel music plays in the background, note nine African-American candidates are running for election in Oktibbeha County and encourage voters to support them. They also advocate for the sale of OCH because the two hospital systems that have submitted proposals to buy it -- Baptist Memorial Health Care Corporation and North Mississippi Health Services -- have a "proven record" of promoting minorities to leadership positions.

One of the two ads invokes the "history-making" election of Barack Obama as U.S. president in 2008 and calls on listeners to "make history again" on Tuesday. It also calls for a yes vote on the hospital sale so Oktibbeha County will have a hospital that promotes minorities beyond "housekeeping and food service" positions.

Nothing but the Facts maintains a Facebook page and website, nothingbutthefacts.net, that claims it is "here to provide the information you, the taxpayer, need to make an educated unbiased vote."

It's not uncommon for groups like Nothing but the Facts, which registered as a limited liability company with the secretary of state's office in August, to file as an LLC before registering as a political action group, according to a secretary of state's office spokesperson. However, once a group raises or spends $200, it must file that with the proper office -- in this case the circuit clerk's.

According to a 2014 report by the Clarion Ledger, Stern was also linked to an ad buy on a Clinton radio station that linked Mississippi District 42 Rep. Chris McDaniel (R-Ellisville) to the Klu Klux Klan during his heated primary against U.S. Senator Thad Cochran.

The report described Stern "a marketing executive who lives in the Reservoir-area of Rankin County and supports liberal and progressive causes in her private life."

At a Thursday afternoon press conference, OCH leaders pushed back against what it described as misinformation about the hospital and said the ads -- specifically those that imply African-American workers have limited opportunities at the hospital -- are untrue.

Shedrick Hogan, assistant manager of OCH's Emergency Medical Service, and several other African-American workers in leadership positions went to the podium to defend the hospital.

Hilton said 18 of the hospital and its clinic's 130 physicians are minorities. While OCH only has two people in administrative positions -- Hilton and Assistant Administrator/Chief Operating Officer Mike Andrews -- Hilton said the hospital considers anyone who is a supervisor or higher to be in leadership position.

The hospital has 19 minority supervisors and directors.