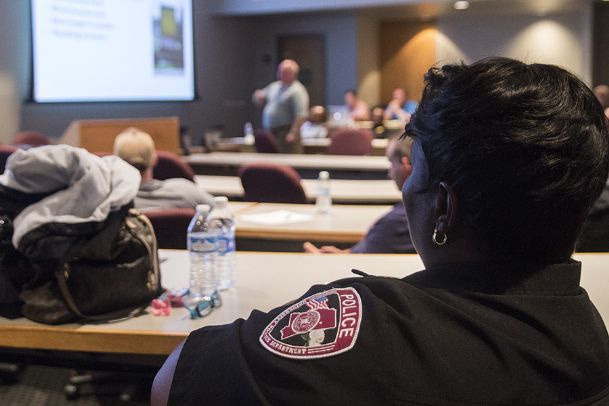 Officer Tracee Moore, an officer with the MSU-Meridian Police Department, listens to Jefferson State Community College Police Chief Mark Bailey during a training session for Golden Triangle law enforcement officers. District Attorney Scott Colom's office sponsored Bailey to train officers from May 30-June 1 in investigative techniques like interviewing and report writing. Colom said he hopes this training session will be the first of many such training sessions. Photo by: Sarah Dutton/Dispatch Staff

Law enforcement officers listen to Chief Mark Bailey from Jefferson State Community College as he teaches the different kinds of body language to take note of during interviews during a training program at The Center for Advanced Vehicle Systems in Starkville. The training was offered to law enforcement officers in Lowndes, Oktibbeha, Clay and Noxubee counties.
Photo by: Sarah Dutton/Dispatch Staff

Rule number one: Everybody lies.

That's according to Chief Mark Bailey, police chief at Jefferson State Community College in Alabama, who on Tuesday emphasized that rule to about 40 law enforcement officers from around the Golden Triangle gathered in a classroom at Center for Advanced Vehicular Systems in Starkville.

It was the first day of a special training session for law enforcement officers sponsored by District Attorney Scott Colom's office. Bailey will spend three days going over investigative skills with officers, from interviewing techniques to gathering and analyzing physical evidence to report writing.

"We're looking at what the prosecutors have to have (for) successful prosecutions," Bailey said.

Bailey has a practiced spiel -- he has been teaching officers across the United States for nearly 30 years. He goes over the same skills everywhere. Colom and Mississippi Bureau of Narcotics Lt. Eddie Hawkins brought Bailey on and organized what they hope to be the first of many such training sessions for law enforcement officers in Lowndes, Oktibbeha, Noxubee and Clay counties.

"We wanted to get everybody together and get them on the same page and give them tools and information that they can use to go out and gather information so that Scott and his group can prosecute cases," Hawkins said. "That's why we put this class together."

Sometimes officers at the scenes of crimes, car accidents or other situations that necessitate law enforcement involvement don't get all the details necessary in reports, Hawkins said. Part of the reason for this particular training program is to help officers put together reports and cases that can make attorneys -- and jurors -- feel as though they were at the scene themselves.

"To give you an example, if we have a bank robbery, when you interview victims, victims are going to see something from a different perspective," Hawkins said. "So it's an officer's job to go in and talk to everybody and interview everybody to try and find out exactly what happened, and then put that on paper so that when you as a juror (come) in and look at the report, you can say, 'Oh, this happened because everybody said (so) and now I can see what actually happened without having to be at the scene.' So what we're trying to do is get everybody on the same page so we can prepare these reports so that when Scott gets it, (he) and his group can be able to prosecute and bring these guys to justice."

The program cost the DA's office about $5,500, including lunch for the officers who are attending training from 8 a.m. to 5 p.m.

"It's part of a training program that the District Attorney's Office wants to offer twice a year on different subjects," Colom added.

Tuesday's class started with basic interviewing techniques. Bailey went over things like what questions to ask at the beginning of an interview and what body language to look for when talking to victims, witnesses and suspects. It doesn't matter who they are, he said. Officers need to question everyone the same way and look for the same signs of nervousness or "depression" -- what Bailey called the moment when a person being interviewed knows they've been caught in a lie.

"If a person sits still, and you ask them questions and they start squirming," he said during the class, "that's what the FBI calls a clue."

He emphasized there isn't one particular tell that's indicative of lying on everyone -- for example, he said, the myth about someone looking to the left when they're lying is nonsense. But officers need to pick up on body language cues for each individual by asking them questions early on that don't necessarily have to do with the investigation, Bailey said.

He used the example of asking interviewees where they went to high school and who their teachers were. He said to watch their eyes as they tried to remember before answering.

Bailey uses pictures of celebrities like athletes, actors and politicians -- he prides himself on not "picking on" politicians from just one party -- who were caught in lies as examples. It's easy to use them, he explained, because everyone knows their scandals, so he can use the body language they were demonstrating right before the truth came out to show how people may look when they're lying.

He showed a clip of President Richard Nixon's famous "I am not a crook" declaration. He pointed to the screen as Nixon, immediately following his own defense, stepped back from the podium where he was standing and put his hands behind his back.

Distancing is when people try to "distance" themselves from the lie they just told, he said. Another example is when they change up their pattern of speaking -- going from answering questions with "no" to "never" was another example.

Passing the info along

Agencies have sent a handful of officers to the training so they can return to the department and pass what they've learned to investigators who weren't able to attend. Officers there Tuesday said the session reminded them of things they'd been "letting slide."

Officer Tracee Moore, a Mississippi State University-Meridian campus police officer who attended, said, officers don't get to practice the techniques Bailey's teaching much on a small campus, so it helps to get a refresher.

"It's very helpful," she said. "I will go back to my department and try to train other officers with it."

Tyrone Edmonds, a deputy with Oktibbeha County Sheriff's Office, said it reminded him to get information from witnesses rather than the other way around.

"We'll go and say, 'Have you heard a gunshot?' rather than, 'What was the loud noise you heard?'" he said. "I've been slipping about that.

"A lot of it's been real informative," he added. "Right now I'm just here to soak it all in and use it when I get back out there."