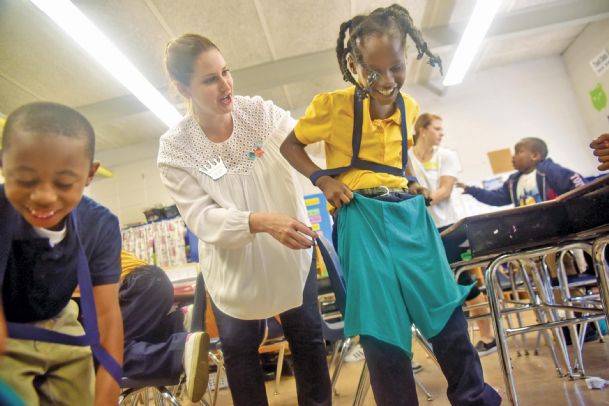 Junior Auxiliary member Alicia Truesdale helps Joe Cook Elementary student Candice Billups, 8, feel as though she can better put herself in a disabled person's shoes Wednesday. By hindering her arm extension to do a simple task, such as put on shorts, Candice got a glimpse at how being a person with cerebral palsy would feel. Candice is the daughter of Connie Billups of Columbus. Photo by: Luisa Porter/Dispatch Staff

Junior Auxiliary member Becky Boyd, left, teaches Joe Cook Elementary students sign language during a program Wednesday that put students in a disabled person's shoes to better understand their struggle. Kejhi Rodriguez, 7, center, does the sign for "turtle" with his classmate Azariah Spencer, 7. Kejhi is the son of Tshanavia Halle, and Azariah is the daughter of Martha and Arthur Whitefield of Columbus.
Photo by: Luisa Porter/Dispatch Staff 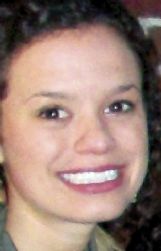 For two hours, second grade students at Joe Cook Elementary School got a glimpse of some of the everyday challenges people with disabilities face.

The "In My Shoes" event, which Columbus Junior Auxiliary members brought to the school Wednesday morning, teaches students about autism, cerebral palsy, Down syndrome, and hearing or vision impairment.

"We'll go into each classroom, teach them about each disability, read them a book, and then we do activities to show them what it's like to have that disability," Event Chair Martha Galloway said.

The activities varied for each disability. For hearing impairment, volunteers taught the students basic sign language. For blindness, students learned how to read Braille and used it to write their names.

In one of the more involved exercises, students learning about cerebral palsy attempted to put on a pair of shorts while using a harness that prevented them from using their arms' full range of motion.

The demonstration, as volunteer Alicia Truesdale told students, is to show what it's like to suffer with cerebral palsy. Cerebral palsy symptoms include, among others, weak or stiff muscles and difficulty moving or a lack of coordination.

Because of that, Truesdale explained to students, it can be hard for people with the condition to perform what would be a routine task to unaffected people. Some groups had it easier than others -- a few harnesses were shorter and more restrictive to show how cerebral palsy's severity varies.

As the lesson continued, students put a Velcro strap around the thumb, forefinger and middle finger of their non-dominant and attempted to color a picture. Truesdale said that exercise illustrated how difficult basic motor skills can be for people with cerebral palsy.

"Most of the time when we do this, if I ask what is a disability, the first thing they're going to say is blind people or deaf people," Truesdale said. "The one thing we try, especially with In My Shoes, is to show the different disabilities.

"It's really interesting for these children to really learn about how your muscles are affected and how each day it can be so difficult to put on your pants or to pick up a crayon and color like they do," she added.

Renee Price, a second grade teacher, said she believes In My Shoes teaches students an important lesson in empathy for people with disabilities.

"It makes them sensitive to other people's conditions," Price said.

Galloway said Junior Auxiliary holds In My Shoes twice a year--in the fall at Joe Cook Elementary and in the spring at New Hope Elementary. She said the program, which Junior Auxiliary has conducted for several years, is geared toward younger students to show them early that it's important to care for people who have disabilities.

"I think it's very important to be kind to all people and this show's that everybody's like us and just to show kindness to everyone," she said.