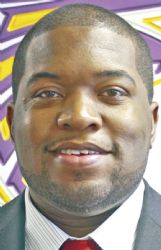 The Dispatch reached out to Lashley after an audio recording surfaced of two men discussing issues presumably related to previous media coverage of the text exchanges. The Dispatch obtained a copy of the audio recording from a former reporter, who said she received it Thursday from Lashley's email address. Lashley is a 2005 Columbus High School graduate, who works as a hair stylist in Atlanta according to his Facebook page.

In the recording, which Lashley told The Dispatch documents a phone conversation between him and Hickman, a man is confronting Lashley about why he attempted to make their relationship public. Lashley, in the recording, denies the man's accusations that he was seeking media attention, citing that he specifically rebuffed previous requests from The Dispatch for an interview.

Lashley did allude to copies of the text messages being sent after someone started a rumor about a relationship between Lashley and former Columbus High School boys' basketball coach Luther Riley.

"I don't want people looking at me like I'm trying to break up folks' homes and stuff, when you know what it was," Lashley told the other man in the recording. "Now you call me out of the blue like this, like I'm going to just get down with the get down. ... Your manhood is hurt at this point. But all this wouldn't have popped off if you hadn't started that rumor about me and that man. You did that. One of your little hoes, you made them do it and they did it."

The other man in the recording, who mentions Riley by name, denies having anything to do with starting the rumor.

Lashley did not admit to sending the email of the recording, saying it was "old" and he didn't "know why that was still in [his] outbox." He said another man who was with him at the time of the phone conversation with Hickman recorded it and later emailed it to Lashley's personal address. Lashley would not identify the man he said recorded the conversation.

"I really don't want to drag this mess up again," Lashley told The Dispatch about his alleged relationship with Hickman. "I'm over him, and I'm over what happened with him. What's done is done."

The Dispatch first reported on the text messages in April after Hickman issued a pre-emptive press release saying they were fabrications aimed to hurt the school district.

"The messages are fake and did not come from me," Hickman said in the April 12 statement. "Someone unknown to me spent a lot of time writing and distributing these fabricated messages in an attempt to divert me from my task of educating students with the ultimate goal of hurting the Columbus Municipal School District."

Subsequently, the newspaper obtained printed copies of the approximately 95 alleged text exchanges between two people. They discuss meeting and efforts to be discreet. There is a nude photograph of someone other than Hickman.

They discuss a trip Hickman took last fall to Washington, D.C., when he attended the Symposium on Open Education. Included is a photograph of Hickman with Arne Duncan, the U.S. Secretary of Education, which was presumably taken at the event. Hickman posted an identical photograph on his Twitter account on Oct. 29. The exchanges also include what appears to be a video of napkins with an official emblem on them and a reference to a presentation at The White House. The video does not appear on Hickman's known social media accounts. In the exchanges, the date on both the photo and video is Oct. 29, the day Hickman gave a presentation at the symposium.

At one point in the exchanges a tiff arises and one of the people bemoans that his career could be in jeopardy.

One of the numbers listed in the text exchanges is an Illinois cell phone number at which The Dispatch has previously contacted Hickman directly.

Neither Hickman nor Board President Angela Verdell returned multiple calls and messages for comment from The Dispatch.

The Dispatch could not reach Riley for comment by press time Friday.