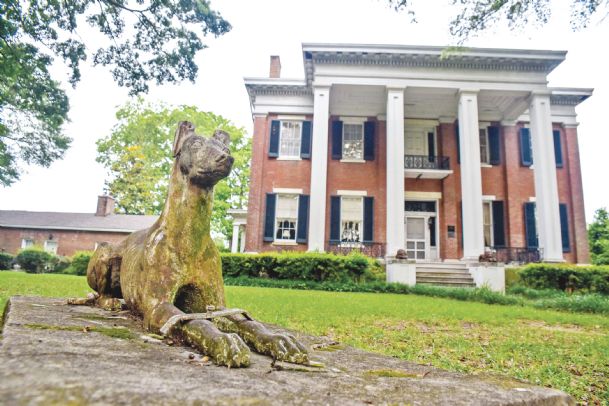 Dick Leike, a local Realtor, is buying Riverview, a historic antebellum home on Columbusâ Southside built in the 1850s. The home has been vacant for two decades. Leike said he has not yet finalized any specific plans for the mansion but preservation is a priority. Photo by: Luisa Porter/Dispatch Staff

Upon its completion in the early 1850s, the massive Greek Revival Mansion known as "Riverview" has been considered a Columbus treasure and a point of pride as the property at 511 Second St. S. changed owners but never its status as one of the state's great antebellum homes.

This week, Dick Leike is taking the steps he believes will return Riverview to its original majesty.

Leike confirmed Monday that he is buying Riverview, which has been vacant (although under a caretaker's supervision) for more than 20 years and on the market for at least 15 years.

"We should be closing on the sale later this week," Leike said Monday.

"It's always been a great property," Leike, who said the highest listing on the property reached $1.5 million, said. "It was well worth the price, but every property is different and there is a distinct market for these kinds of properties. We had some prospects over the years, but it never worked out."

Leike would not disclose the purchase price.

"The total cost will have to include restoration work, too," he said. "It's not that the house is falling down. You could move in and live there tomorrow. But I really want to get the house as close as possible to its original condition and that will require a lot of work."

'One of the finest homes in the South'

Local historian Rufus Ward said Riverview was probably designed by Philadelphia-trained architect James Lull, who moved to Columbus in the mid-1830s. The massive home (60-feet in height or, says Leike, the equivalent of a modern six-story building) and its outbuilding (a separate kitchen/servants' quarters located south of the mansion) occupied almost an entire city block between First and Second streets and Fifth and Sixth avenues.

It is not the sheer size of the property that makes it unique, however.

"It was one of the finest homes built in the South," Leike says. "It's not only on the Registry of Historic Places, it's also a U.S. National Landmark, one of only about 2,500 in the entire country. It's considered on of the finest examples of Greek Revival architecture in the South."

The home has gone through a series of owners.

Much like Leike, the previous owner, Patty DeBardeleben (formerly Murfee), bought the house in 1970 primarily to preserve it.

"At the time she bought the house, there had been some talk about tearing it down and building apartments on the property," Leike said. "I think her main concern was preserving the house. She lives in Selma, Alabama, now and hasn't lived at Riverview in 20 years."

Leike, who was born in Atlanta and built his real estate business in Memphis, moved to Columbus 16 years ago. He and his wife, Jo Anne, bought another antebellum home, "White Arches," in 2002. The Leikes have no plans to move into Riverview.

"We do have some ideas about what we want to do with the property," he said. "But we don't have a final plan yet, other than I hope that it will be something for the entire community."

Leike said his motivation in buying Riverview was preservation.

"Columbus has some remarkable houses built in the early 1800s," he said. "When we moved here, we were just amazed. I grew up in Atlanta and lived in Memphis. Most of those kinds of houses there were burned during the Civil War, so Columbus has something many other cities in the South have lost."

Although the cleaning and refurbishing has yet to start, Leike has already made some moves on the property, including purchasing another property that was once part of the original Riverview grounds.

In fact, the one thing Riverview doesn't have that Leike hopes to return is a "river view."

One of the notable features of the home is that the front and back exteriors are almost identical, each with four massive columns. As originally planned, the back of the house was designed to provide a scenic view of The Tombigbee River, hence the name "River View".

That changed. Sometime in the 1940s or early 1950s, a 2,300-square-foot house and a detached 800-square foot garage was built at what is now 523 First Street, between Riverview and the Tombigbee.

Leike has purchased that home and will either have it removed or demolished, again giving Riverview a view to the west, although it still won't be a "river view," a large stand of tall trees having grown between First Street and the river bank.

When the smaller house was built, it may have spoiled the view. It may ultimately have saved the mansion.

"Really, having the opportunity to purchase that smaller house was the thing that really got us going," Leike said. "If someone else has bought the house, we would not have been able to really return Riverview to what it was like when it was built. The opportunity may have passed. So when that house came on the market, it was time to move if we were ever going to do it."

Ward is thrilled that Leike has stepped in to ensure the home's future.

"Riverview truly is one of the South's grand antebellum mansions," Ward said. "We owe a debt to Patty for having preserved it and to Dick for stepping up to ensure that it remains a part of Columbus life."