A drop in the bucket: Despite surge in black-owned businesses, sales lag 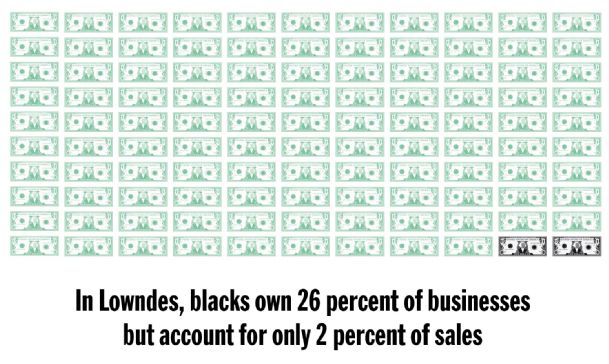 Rose Evans poses Feb. 12 inside of her Columbus-based store, Roseâs Corner. She said her customers are primarily black, but that she sees a discrepancy in business support between black and white community members.
Photo by: Luisa Porter/Dispatch Staff

Black ownership of businesses more than doubled throughout the Golden Triangle and the state during the Great Recession, but sales by those businesses remained disproportionately low when compared to earnings from businesses owned by whites.

Between 2007 and 2012 -- the most recent numbers available -- black-owned businesses in Mississippi increased by 60 percent, according to the U.S. Census Bureau's Survey of Business Owners. During the same time period, white-owned businesses decreased by approximately 9 percent.

Those shifts were even more pronounced in Lowndes and Oktibbeha counties.

In the five years leading up to 2012, black-owned businesses in Lowndes County more than doubled -- to 1,288 firms. In Oktibbeha, they approximately tripled -- to 1,137 firms.

Leiquint Reed owns one of the 708 black-owned businesses opened in Lowndes County between 2007 and 2012. He opened Tech Video Audio -- a television store -- in 2009 after his former employer, Rex TV, closed.

"It's different when you go to a person who's been selling products for years compared to a guy who...has only known about a TV for three or four weeks," Reed said of his experience.

Despite that jump, sales by black-owned businesses barely moved.

Excluding public companies, Mississippi businesses had sales of $87 billion in 2012. Of those sales, black-owned businesses made up only $2 billion, up from $1.7 billion five years prior.

Ninety-five percent of sales were from white-owned businesses.

Those numbers hold true on a local level as well.

Twenty-six percent of Lowndes County businesses were black-owned in 2012 yet sales at those businesses made up only two percent of all sales in the county.

The difference was even more apparent in Oktibbeha County where blacks owned 34 percent of businesses but accounted for just 1.6 percent of sales.

White-owned businesses accounted for at least 93 percent of sales in both counties.

A lack of support

"The truth is white people support their own. Sometimes we don't. That's the truth," said Rose Evans, owner of Rose's Corner in Columbus.

Evans, who used to work in Starkville, said she quit her job after years of being told what to do. She opened a women's clothing store in 2008.

Evans said her customers are primarily black, though she does receive business from the white community.

She believes the sales gap is due to the fact that instead of coming together, black people sometimes have a hard time helping each other.

"A lot of black people are just not going to support each other. I think it's a little bit more of (an issue of) jealousy," she said.

Low rates of ownership and minuscule sales haven't always been the norm.

The 1910 Census was the first to ask respondents about business ownership. It showed that coming out of slavery, blacks (13.9 percent) were more likely than whites (12.52 percent) to be employers.

"If you look at the first generation of blacks coming out of slavery, it's all about enterprise," said John Sibley Butler, a University of Texas professor.

Butler, who examines entrepreneurship in minority and immigrant communities, views the growth in black-owned businesses during the Great Recession as a possible "return to enterprise" for the black community.

According to an annual study by the entreprenuerial-focused Kauffman Foundation, the number of black-owned businesses in Mississippi peaked in 2009, the last year of the Great Recession, which began in 2007. That same year, black unemployment in Mississippi hit a peak of 19.8 percent.

In Mississippi, whites are two and a half times more likely than blacks to own a business according to the Kauffman study.

The drive to start a business isn't always enough, said Butler, infrastructure is also needed. He says that has been lacking since the 1960s.

Butler cites organizations like the Negro Business League and the ideas of Booker T. Washington as the building blocks for such infrastructure. While he has seen an uptick in the numbers of businesses, he does not see that infrastructure taking shape.

"As long as you have the 1960s generation, as long as people think they can march and recite a speech and things will change, they'll never do anything," Butler warned.

Mississippi recognized the discrepancy in black versus white business ownership in the early 1990s by establishing the Minority and Small Business Development Division at Mississippi Development Authority.

"Those things that are major obstacles (to black ownership of businesses) are historical in nature," said Bob Covington, director of MSBDD. "If your parent was an entrepreneur, you probably would be as well."

"If they didn't come from a family background of entrepreneurs, well probably they are accustomed to working for someone else," Covington said.

Tech Video's owner comes from such a family.

While Reed's parents weren't business owners, he saw examples of leadership within his family.

His uncle is Lewis E. Reed, the first black president of the St. Louis, Missouri, board of aldermen. Lewis Reed has been credited with helping spur business development in parts of St. Louis. "My motivation comes from seeing my uncle's achievements, when I was younger," he said.

Peter Imes is publisher of The Dispatch. You can email him at [email protected]