Opening a dialogue about poverty 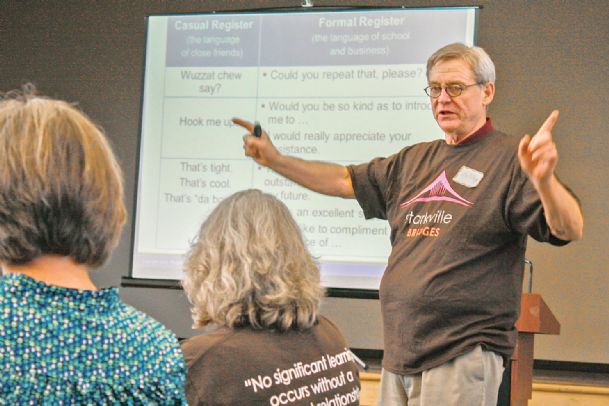 Bobby Weatherly speaks to members of the Starkville community Tuesday afternoon at a seminar educating about poverty. The Starkville Bridges program teaches citizens how to communicate and teach others who are trying to remove themselves from poverty. Photo by: Zach Odom/Dispatch Staff

Bobby Weatherly paced in front of a projector in the Starkville Sportsplex gymnasium Tuesday.

He had on brown shoes, tan khakis and a brown shirt that read, "Starkville Bridges." There were about 20 people in the gym. Weatherly was leading a discussion about how to reduce the presence of predatory lenders.

His blue eyes lit up. He had an idea.

That was kind of the point of the day-long class -- to educate people who are not poor about generational poverty. It was geared toward middle- and upper-class Golden Triangle residents.

The group that organized the class is the Starkville branch of "Bridges Out of Poverty." It is a non-profit organization that attempts to look at poverty through a different lens, a lens that does not judge those in poverty, but instead values their perspective; a lens that sees through what the group calls "hidden rules" of the impoverished, the middle-class and the wealthy; a lens that seeks to understand and to give people the resources to make decisions to improve their situation.

While Bridges Out of Poverty regularly holds classes for people dealing personally with poverty, Tuesday's class was about helping the "haves" understand the "have nots" and facilitating a discussion about the causes and realities of poverty.

About 20 people attended the day-long class, which was led by Weatherly. He hails from Vicksburg, where he owns his own financial planning company and is on the steering committee for the local Bridges Out of Poverty chapter.

Those who attended were challenged to consider poverty in a different way and to discuss perceptions and solutions.

Kicking around the questions

Last week, the 2013 Census Bureau showed that Mississippi remains the poorest state in the Union, with a poverty rate of 22.5 percent. The bureau reported that 17.1 percent of Mississippi's population lacked health insurance in 2013.

Weatherly asked the group to discuss questions such as: "What are the basic, everyday needs for those in poverty?"

"How much time does it take to deal with government agencies?"

"What kind of debt do you find in poverty?"

"What is central to society for people in poverty? For the middle class? For the wealthy?"

"Why is entertainment so central to life for people in poverty?"

The groups of four to five people gathered at round tables talked through these questions, made notes and asked questions of their own.

Entertainment was one of the issues that puzzled the class the most.

Weatherly said it is important because there is not much else to look forward too. It's a hard concept for the middle class and the wealthy, understandably, Weatherly said, because it seems like a poor use of meager resources.

"Entertainment," class attendee Shavell Rice said. "That got me. That really got me."

Bridges identifies four of the primary causes of poverty: one, behaviors of the individual; two, absence of human and social capital within the community; three, human exploitation; and four, political and economic structure.

Weatherly said there are several factors that contribute to each of these root causes.

Reilly Morse, president of the Mississippi Center for Justice, identifies with many of these points -- especially human exploitation. He said too often those who criticize the poor do not consider the affects of generational poverty. Inside the Starkville Sportsplex on Tuesday, Weatherly agreed that stereotypes of those in poverty are widespread and damaging.

When Bridges says human exploitation, they are largely referring to the payday loan industry. These institutions, Weatherly said, take advantage of those in poverty by providing small cash loans that carry atrocious interest rates.

"I'm going to label those industries and companies as predators," Weatherly said.

These industries abound throughout the state. In Columbus there are cash lenders of every brand. Starkville voted in 2010 to not allow any more payday lenders to open up shop. The city has about 20 such businesses that were already established before 2010.

Morse said the presence of these businesses is a bad indicator for the local economy and that such businesses prevent people from getting ahead.

"If the market is signaling anything, it's that our state's weak regulation of predatory lending is toxic to upward mobility," Morse said. "Allowing a jungle of fast cash stores in distressed neighborhoods deepens the poverty and strips out the opportunity faster than you can say 'usury.'"

The Center for Justice, Morse said, believes the state legislature must do more to combat payday lending in the state, a point discussed in the Sportsplex by class participants.

"When we make low wage Mississippians pay more for costs of living and short-term borrowing, then we are only hurting out state as a whole," Morse said.

Many in the class had attended a Bridges exercise before and are involved in various religious associations and non-profits in the area.

"I learned a lot about payday lending and how that works," said Dorothy Isaac, a lifelong resident of Starkville who learned about Bridges through her involvement with the NAACP.

Class attendees showed up not just to learn, but also to discuss. The point of this class, Weatherly said, is to show people attending that they are not the only ones who care.

Ruth Jernigan of Starkville was in the class. It was Jernigan's second Bridges event. She said she enjoyed having these important discussions.

"It helps you focus on the issues of poverty and how people in poverty are reacting and making choices in comparison to the middle class and the wealthy," Jernigan said.

She said that before meeting with Bridges, she didn't consider different socio-economic classes having different rules and orientations, but she realizes now that they do. Now, she said she understands that poverty is a generational issue that will take voices from all walks of life to fix.

"It can't just be the middle class," Jernigan said.

No world problems were solved in the Sportsplex on Tuesday, but important issues were raised and new ways of thinking were explored by those who came to learn.

And that, Weatherly said, is the point.

"I hope all of us continue to open our minds more about poverty," Weatherly said.