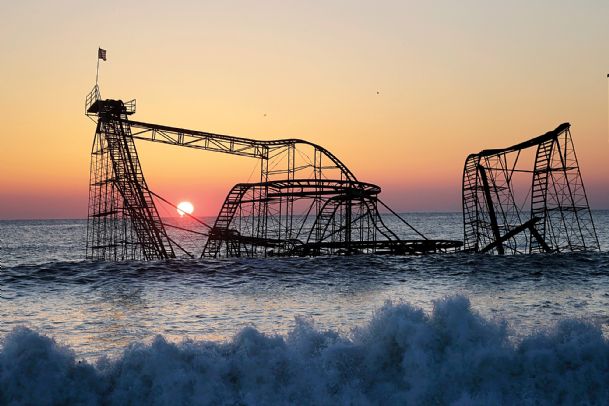 The sun rises in Seaside Heights, N.J., in a Feb. 25, 2013 file photo, behind the Jet Star Roller Coaster which has been sitting in the ocean after part of the Casino Pier was destroyed during Superstorm Sandy. Photo by: AP Photo/Mel Evans, File

SEASIDE HEIGHTS, N.J. -- This time next week, perhaps the most famous symbol of Superstorm Sandy's devastation at the Jersey shore will be gone.

Demolition work is to start Tuesday on the remnants of the Jet Star, the roller coaster that plunged off an amusement pier in Seaside Heights during the Oct. 29 storm.

It should take about four days to remove the ride, said Maria Mastoris, a spokeswoman for Casino Pier.

"We are thrilled about this," she said. "We've been waiting for this for a long time. It shows we're making progress and that we'll be open and ready for the summer."

Images of the coaster in the water have appeared hundreds of times in the media and been used to help sell memorabilia to raise money for storm victims. The coaster is featured on a popular car magnet sold by one of the many charities raising money.

It also continues to draw large crowds to the Seaside Heights boardwalk, which remains under reconstruction.

Casino Pier has hired Weeks Marine, an experienced maritime contractor, to do the work.

"They're planning on taking it apart piece by piece and taking it away, Mastoris said. "They're going to take a crane around and take pieces off."

Works crews will operate around the clock until the last of the coaster has been removed.

In January, a man who lives nearby climbed to the top of the coaster and unfurled an American flag atop it before climbing down and being arrested by police. His municipal court case has yet to come to trial.

The project will start a few hours after Britain's Prince Harry departs from Seaside Heights. He's visiting the Ocean County community on Tuesday as part of a tour of America.