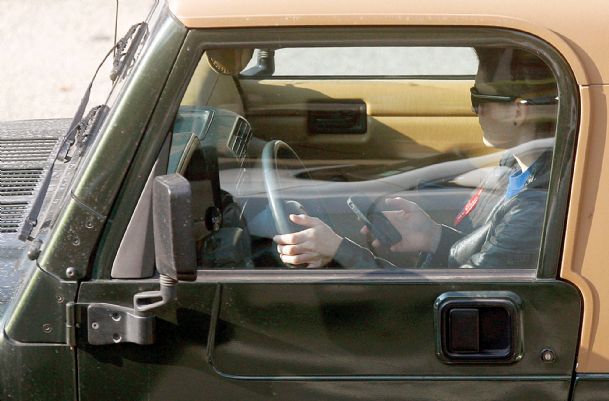 A driver uses a phone while driving in Los Angeles in this Wednesday, Dec. 14, 2011, file photo. Photo by: AP Photo/Damian Dovarganes, File

NEW YORK -- The country's four biggest cellphone companies are set to launch their first joint advertising campaign against texting while driving, uniting behind AT&T's "It Can Wait" slogan to blanket TV and radio this summer.

AT&T, Verizon Wireless, Sprint and T-Mobile will be joined by 200 other organizations backing the multi-million dollar ad campaign.

AT&T and Verizon have run ads against texting and driving since 2009. In 2005, Sprint Nextel Corp. created an education program targeting teens learning to drive.

"Every CEO in the industry that you talk to recognizes that this is an issue that needs to be dealt with," AT&T CEO Randall Stephenson said.

"I think we all understand that pooling our resources with one consistent message is a lot more powerful than all four of us having different messages and going different directions."

Beyond TV and radio ads, the new campaign will stretch into the skies through displays on Goodyear's three blimps. It will also include store displays, community events, social-media outreach and a national tour of a driving simulator. The campaign targets teens in particular.

AT&T Inc. calls texting and driving an "epidemic," a term it borrows from the federal Department of Transportation. The U.S. transportation secretary has been on a self-described "rampage" against cellphones since his term began in January 2009.

Stephenson said that "texting while driving is a deadly habit that makes you 23 times more likely to be involved in a crash." The figure refers to a 2009 government study of bus and truck drivers. It isn't based on crashes alone, but on the likelihood the drivers showed risky behavior such as lane drifting or sharp braking, sometimes culminating in a crash.