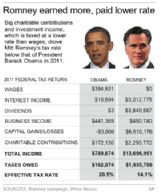 WASHINGTON -- Mitt Romney has given Democrats plenty of support for their claim he manipulated his deductions to keep his overall 2011 federal income tax rate above a certain threshold for political purposes.

The Republican presidential nominee, whose wealth is estimated as high as $250 million, seems hemmed in by a comment to reporters in August that he had never paid less than 13 percent in taxes in any single year over the past 10. Had he taken the full charitable deduction last year, it would have pushed his tax liability below 13 percent.

The former Massachusetts governor and his wife, Ann, could have claimed more in deductions, the trustee of Romney's blind trust said when the candidate's 2011 tax returns were released.

But, Brad Malt acknowledged, the couple "limited their deductions of charitable contributions to conform to the governor's statement in August, based on the January estimate of income, that he paid at least 13 percent in income taxes in each of the last 10 years."

The tax returns had become a distraction for his campaign, with Democrats and even some fellow Republicans this summer urging Romney, who earlier had released 2010 data and a preliminary 2011 return, to disclose more than two years of information. Senate Majority Leader Harry Reid, D-Nev., had kept the issue alive by making an unsubstantiated and roundly criticized claim that Romney had not paid any taxes for 10 years. Romney's statement about the 13 percent level had come in reaction to Reid's assertion.

The decision of Romney's trustee to limit the use of charitable deductions in 2011 in order to adhere to the candidate's claim raised the eyebrows of several tax law experts. They noted that the trustee's use of numerous tax strategies gives Romney the rare ability to loosen or limit his tax payments at will.

The Romneys donated roughly $4 million to charities last year, but only claimed a deduction of $2.25 million on their tax return, filed with the Internal Revenue Service on Friday.

That information, Reid said, "reveals that Mitt Romney manipulated one of the only two years of tax returns he's seen fit to show the American people -- and then only to 'conform' with his public statements.

That raises the question: What else in those returns has Romney manipulated?"

Romney, one of the wealthiest candidates ever to seek the presidency, paid taxes at a rate lower than taxpayers whose income was mostly from wages, which can be taxed at higher rates.

He released his 2010 returns in January, but he continues to decline to disclose returns from previous years -- including those while he worked at Bain Capital, the private equity firm he co-founded.

The Obama campaign and other Democrats have pushed for fuller disclosures, reminding the Republican candidate that his father, George Romney, released a dozen years of returns when he ran for president.

Overall, the Romneys' main tax return and separate forms for blind trusts totaled more than 800 pages. The blind-trust income came from hedge funds and other complex investment vehicles. The couple also reported $3.5 million in income "from sources outside the United States," citing "various countries." Their forms included filings on holdings in Switzerland, Ireland, Germany and the Cayman Islands.

The Obama campaign accused Romney anew of profiting from millions invested overseas and "loopholes and tax shelters only available to those at the top."

Apparently hoping to resolve basic questions voters might have, the Romney campaign released a letter from his accountants saying that in the 20 years prior to 2010 the Romneys paid an average annual effective rate of 20.2 percent, never lower than 13.66 percent.

On average, middle-income families -- those making from $50,000 to $75,000 a year -- pay 12.8 percent of their income in federal taxes, according to Congress' Joint Committee on Taxation. But many pay a higher rate.

Romney is aggressively competing with Obama for the support of middle-class voters.

Obama's tax return for last year showed that he and his wife, Michelle, paid $162,074 in federal taxes on $789,674 in adjusted gross income, an effective tax rate of 20.5 percent. Their income plunged from $1.7 million in 2010, with declining sales of the president's books. In 2009, the Obamas reported income of $5.5 million, fueled by the best-selling books.

The Romneys' tax bill could have been lower. They gave $2.6 million in cash to the Church of Jesus Christ of Latter-day Saints, the documents show. They gave just over $2 million in noncash charitable contributions, including donations of stock holdings in Domino's Pizza, Dunkin Donuts and Warner Chilcott, to a family trust.

"It's interesting he didn't take the full charitable deduction," said Victor Fleischer, a University of Colorado law professor who has testified before Congress urging tightened oversight of private equity firms. "You're in a pretty lucky position when you can pay more tax" to get up to a 13 percent rate. Fleischer and several others said it was doubtful Romney could later take any unclaimed deductions in future years.

The Romneys had obtained a filing extension beyond the usual April 15 tax deadline.

Most of their income is from investments held in a blind trust, and campaign aides have stressed that he makes no decisions on how his money is invested. Capital gains and dividend interest is now generally taxed at 15 percent whereas the top marginal rate for income from wages is 35 percent.

The Romneys reported $6.8 million in capital gains, such as from the sale of stocks and other securities, and $6.37 million from dividends and taxable interest.

Several tax law experts said the newly released tax returns would not be much help in resolving critics' questions about his finances: whether he used aggressive tax-deferral strategies, what might be the specifics and tax advantages of his numerous offshore investments, what was the source of his massive retirement account and what are the details behind his now-closed $3 million Swiss bank account.

Analysts said details about his investments could emerge only if Romney provided far more of his tax returns, including files dating back to his years at Bain, the private firm he left in 2001. Romney, who initially refused to disclose any tax returns, has drawn the line at providing those from the past two years.

The Republican vice presidential nominee, Rep. Paul Ryan of Wisconsin, and his wife, Janna, whose returns were also released Friday by the Romney campaign, paid $64,764 in taxes on $323,416 of adjusted gross income in 2011, for an effective rate of 20 percent.

Just over half of their income came from Ryan's congressional salary. Other income flowed from rental real estate and other investments, including a trust inherited by Janna Ryan. They donated $12,991 to charity, including to the Boy Scouts of America

5. More than 260 people cited for curfew, other shelter-in-place violations in Golden Triangle AREA