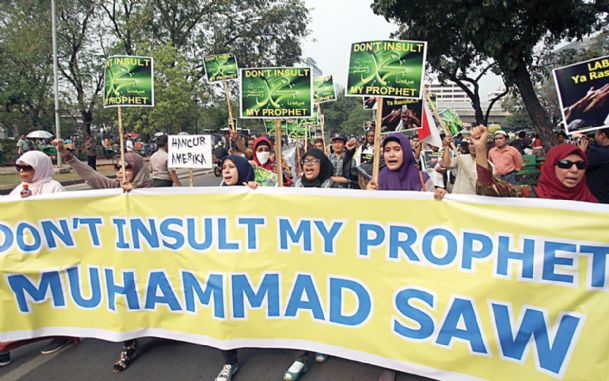 Indonesian Muslims carry a banner reading: âDonât insult my Prophet Muhammadâ during a protest against an anti-Islam film that has sparked anger among followers, outside the U.S. Embassy in Jakarta, Indonesia Friday. Photo by: AP Photo/Achmad Ibrahim

PESHAWAR -- Protests by tens of thousands of Pakistanis infuriated by an anti-Islam film descended into deadly violence on Friday, with police firing tear gas and live ammunition in an attempt to subdue rioters who hurled rocks and set fire to buildings in some cities. Three people were killed and dozens injured on a holiday declared by Pakistan's government so people could rally against the video.

Thousands of Muslims protested in at least half a dozen other countries, some burning American flags and effigies of President Barack Obama.

In the Pakistani city of Peshawar, police fired on rioters who were torching a cinema. Mohammad Amir, a driver for a Pakistani television station, was killed when police bullets hit his vehicle at the scene, said Kashif Mahmood, a reporter for ARY TV who was also sitting in the car at the time. The TV channel showed footage of Amir at the hospital as doctors tried to save him.

A protester who was shot during a demonstration in the city also died, said police officer Rohhullah Khan.

In Karachi, armed protesters among a group of 15,000 fired on police, killing one and wounding another, said police officer Ahmad Hassan. The crowd also burned two cinemas and a bank, he said.

Clashes between police and stone-throwing protesters also occurred in Lahore and Islamabad, the Pakistani capital. Police fired tear gas as well as warning shots in an attempt to keep them from advancing toward U.S. missions in the cities. At least 55 people, including nine police, were injured in the nationwide unrest, according to police and hospital officials.

The film denigrating the Prophet Muhammad -- "Innocence of Muslims" -- has sparked unrest in many parts of the Muslim world over the past 10 days, and the deaths of at least 33 people, including the U.S. ambassador to Libya, have been linked to the violence. Much of the anger has been directed at the U.S. government even though the film was privately produced in the U.S. and American officials have criticized it for insulting Muslims.

In Iraq, about 3,000 protesters condemned the film and caricatures of the prophet in a French satirical weekly. The protest in the southern city of Basra was organized by Iranian-backed Shiite groups. Some protesters raised Iraqi flags and posters of Iran's supreme leader, Ayatollah Khamenei, while chanting: "Death to America."

Protesters burned Israeli and American flags and raised a banner that read: "We condemn the offences made against the prophet."

In the Sri Lanka capital of Colombo, about 2,000 Muslims burned effigies of President Barack Obama and American flags at a protest after Friday prayers, demanding that the United States ban the film. In Bangladesh, over 2,000 people marched through the streets of the capital, Dhaka, to protest the film. They burned a makeshift coffin draped in an American flag and an effigy of Obama.

They also burned a French flag to protest the publication of the caricatures of the prophet. Small and mostly orderly protests were also held in Malaysia and Indonesia.

Thousands gathered in Lebanon's Bekaa valley for the latest in a series of protest rallies organized by the Shiite militant group Hezbollah. Protesters carried the yellow Hezbollah flag.

Hezbollah appears to be trying to ensure the gatherings don't become violent, planning them only in areas where Hezbollah has control. None of the rallies targets the heavily fortified U.S. Embassy in the hills outside Beirut.

Pakistan has experienced nearly a week of violent rallies against the film in which five people have died. The government declared Friday to be a national holiday -- "Love for the Prophet Day" -- and encouraged peaceful protests.

In Peshawar, several hundred protesters set ablaze two cinemas and the city's chamber of commerce, and damaged shops and vehicles. Police beat demonstrators with batons. Later in the day, tens of thousands of protesters converged in one of the city's neighborhoods and called for the maker of the film, an American citizen originally from Egypt, to be executed.

Police clashed with over 10,000 demonstrators in several areas of Islamabad, including in front of a five-star hotel near the diplomatic enclave where the U.S. Embassy and other foreign missions are located. A military helicopter buzzed overhead as the sound of tear gas being fired echoed across the city.

The government temporarily blocked cell phone service in 15 major cities to prevent militants from using phones to detonate bombs during the protests, said an Interior Ministry official, speaking on condition of anonymity because he was not authorized to talk to the media. Blocking cell phones could make it harder for people to organize protests as well.

U.S. officials have struggled to explain to the Muslim world how they strongly disagree with the anti-Islam film but have no ability to block it because of the freedom of speech in the country.

The U.S. Embassy in Islamabad, in a bid to tamp down public rage over the film, is spending $70,000 to air an ad on Pakistani television that features President Barack Obama and Secretary of State Hillary Rodham Clinton denouncing the video. Their comments, which are from previous public events in Washington, are in English but subtitled in Urdu, the main Pakistani language.

"If denying the Holocaust is a crime, then is it not fair and legitimate for a Muslim to demand that denigrating and demeaning Islam's holiest personality is no less than a crime?" Ashraf said during a speech to religious scholars and international diplomats in Islamabad.

Denying the Holocaust is a crime in Germany, but not in the U.S.

The Pakistani Foreign Ministry on today summoned the U.S. charge d'affaires in Islamabad, Richard Hoagland, to protest the film. Pakistan has banned access to YouTube because the website refused to remove the video.

Iranian President Mahmoud Ahmadinejad also lashed out at the West over the film and the caricatures in the French weekly, Charlie Hebdo.

"In return for (allowing) the ugliest insults to the divine messenger, they -- the West -- raise the slogan of respect for freedom of speech," said Ahmadinejad during a speech in the capital, Tehran.

He said this explanation was "clearly a deception."

In Germany, the Interior Ministry said it was postponing a poster campaign aimed at countering radical Islam among young people due to tensions caused by the online video insulting Islam. It said posters for the campaign -- in German, Turkish and Arabic -- were meant to go on display in German cities with large immigrant populations today but are being withheld because of the changed security situation. Germany is home to an estimated 4 million Muslims.