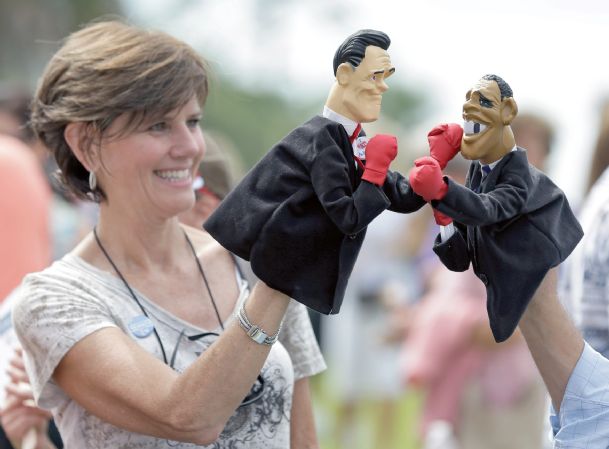 WASHINGTON -- Now it's Mitt Romney who wants to be the candidate of change.

Romney seized on President Barack Obama's comment that "you can't change Washington from the inside." Grasping for a way to right his campaign and appeal to independents, the Republican nominee said he has what it takes to end the nasty partisanship in the nation's capital.

Romney was expected to press the issue again today during a campaign rally in Nevada, a state hard hit by the nation's housing and unemployment woes.

Obama, traveling Friday to Virginia and addressing an AARP convention by satellite, planned to keep hammering Romney for comments he made in a private fundraiser about 47 percent of the country believing they are victims and entitled to a government handouts.

Obama, who ran for president in 2008 on a pledge to fix Washington's combative tone, said in an interview that he had come to the conclusion "you can't change Washington from the inside. You can only change it from the outside." Adding that he wanted people to speak out on issues, he went on to say: "So something that I'd really like to concentrate on in my second term is being in a much more constant conversation with the American people so that they can put pressure on Congress to help move some of these issues forward."

Obama adviser David Axelrod defended the president's comments on NBC's "Today." "He said in order to move Washington and to move the Congress, you have to enlist the American people," Axelrod said.

"That was the lesson he learned from the standoff on the debt ceiling last summer, and he's been making that point consistently," Axelrod said. "The fact that Gov. Romney picked up on it and attacked him on it is just one more example of how he's just cascading from one gratuitous attack to another, instead of talking about solutions to the problems we face."

Obama's campaign also released a web video Friday morning targeting older voters, many of whom would fall into the group of Americans Romney referenced when he said that nearly half of Americans don't pay income tax but get benefits. Senior citizens receiving Medicare make up about 15 percent of those getting federal benefits; about 22 percent of those not paying income tax are seniors who get tax breaks that offset their income.

The Obama video features voters commenting on Romney's assertions, including one man who says "It offends me."

Polling shows Obama with a slight lead nationally, as well as in many of the eight or so battleground states that will decide the election. That includes Virginia, where Democrats with access to internal polling say Obama is up 3 or 4 percentage points over Romney in Virginia, a slimmer margin than in some recent public polling.

Obama has also pulled ahead of Romney in cash on hand, a key measure of a campaign's financial strength. The Democrat has more than $88 million to spend in the campaign's final weeks, while Romney has just over $50 million at his disposal.

Romney's campaign is seeking to regroup after a rough stretch that included the emergence of a video in which he tells wealthy donors at a private fundraiser that 47 percent of Americans pay no income tax and that they believe they are victims and entitled to an array of federal benefits. Obama has cast those remarks as a sign that Romney is out of touch with most Americans.

"When you express an attitude that half the country considers itself victims, that somehow they want to be dependent on government, my thinking is maybe you haven't gotten around a lot," Obama said Thursday during a forum on Univision, the Spanish-language TV network.

Romney is also facing criticism from some in his own party that he's spending too much time raising money and not enough time talking to voters in the eight or so battleground states that will decide the election. In response, his campaign added a Sunday rally in Colorado to his schedule and announced a three-day Ohio bus tour that kicks off Monday.

At the same time, his wife, Ann, said GOP critics should lay off. "Stop it. This is hard. You want to try it? Get in the ring," she said Thursday evening in an interview with Radio Iowa.

"This is hard, and you know, it's an important thing that we're doing right now, and it's an important election," she said. "And it is time for all Americans to realize how significant this election is and how lucky we are to have someone with Mitt's qualifications and experience and know-how to be able to have the opportunity to run this country."

The president will campaign this weekend in Wisconsin, a state Romney is trying to put in play. Republicans are hoping the addition of Wisconsin Rep. Paul Ryan to the GOP ticket will help them claim victory there -- or at least force Obama to spend time and money to hold the state.

Even with Election Day under seven weeks away, voters across the country are already casting ballots. By week's end, early voting will be under way in two dozen states.

Obama was also making a play for older voters today by speaking via satellite to an AARP convention and taking questions from the group's members. The president's campaign is seeking to gain an advantage with seniors and voters nearing retirement by attacking the Republican ticket's plan for Medicare.

The popular federal entitlement for seniors was the focus of a new television ad from the Obama campaign. The ad, scheduled to air today in Colorado, Florida and Iowa, presents a Democratic refrain -- that Romney and Ryan would turn Medicare into a voucher program that could raise seniors' health costs by up to $6,400 a year.

Independent groups have said that a House Republican budget proposal led by Ryan could lead to higher costs for older Americans. But exactly how much is far from clear. The ad relies on the Center on Budget and Policy Priorities, a liberal-leaning think tank, for the figure it cites.

Supporters of the Ryan plan say competition among private insurance providers could wring waste out of the system and bring down costs.