Shuttle to sightsee around Calif. with low flyovers 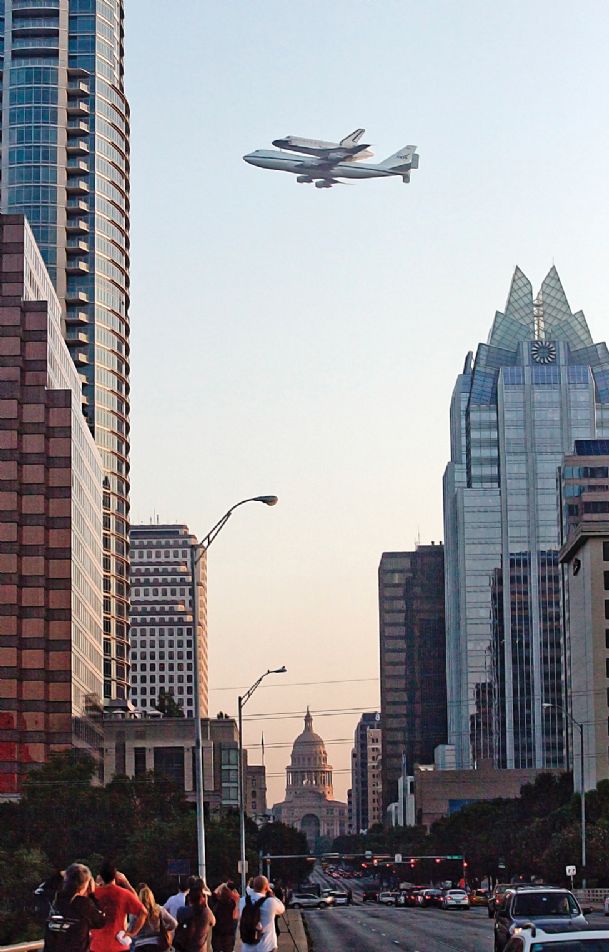 The Space Shuttle Endeavour is ferried by NASA's Shuttle Carrier Aircraft (SCA) over downtown Austin, Texas early Thursday. Endeavour is making a final trek across the country to the California Science Center in Los Angeles, where it will be permanently displayed. Photo by: AP Photo/Statesman.com, Alberto Martinez

LOS ANGELES -- Space shuttle Endeavour will spend its last flying day today not rocketing into space, but doing what most tourists do when visiting California: Taking in the state Capitol, Golden Gate Bridge and the Hollywood Sign.

In what promises to be a crowd-rousing air show, Endeavour, strapped atop a 747 jumbo jet, will take off after sunrise from Edwards Air Force Base in the Mojave Desert and dip low over various landmarks in a 4 1/2-hour sightseeing flight before landing at the Los Angeles International Airport.

It's Endeavour's last aerial hurrah before it spends its retirement years as a museum piece.

"We're so excited to be welcoming Endeavour home in grand style with these flyovers," said Jeffrey Rudolph, president of the California Science Center, where the shuttle will go on permanent display.

Since Endeavour will buzz by some of the Golden State's most iconic sights, law enforcement and transportation authorities warned motorists not to "gawk and drive."

"We want people to take in this majestic show," Los Angeles police Cmdr. Scott Kroeber said earlier this week. "But if you're driving, please drive and don't try to take in the show simultaneously."

Extra officers will be on duty along the freeways near LAX to make sure traffic flows smoothly as the shuttle zooms overhead.

Endeavour returned to its birthplace Thursday after an emotional cross-country ferry flight that made a special flyover of Tucson, Ariz., to honor its last commander, Mark Kelly and his wife, former Arizona Rep. Gabrielle Giffords.

Giffords, who is recovering from a gunshot wound to the head, was "hooting and hollering" as Endeavour looped around her hometown, according to her former aide C.J. Karamargin.

NASA's shuttle fleet, which retired last year after three decades of flight, was assembled in Palmdale near Edwards Air Force Base. The military outpost 100 miles north of Los Angeles served as the original shuttle landing strip and remained a backup site in case of stormy weather at Cape Canaveral, Fla.

The youngest shuttle, Endeavour replaced Challenger, which blew up during liftoff in 1986. NASA lost another shuttle, Columbia, in 2003 when it disintegrated during re-entry. Fourteen astronauts were killed.

On its maiden flight in 1992, a trio of spacewalking astronauts grabbed a stranded communications satellite in for repair. It also flew the first repair mission to the Hubble Space Telescope to fix a faulty mirror. But most of its flights ferried cargo and equipment to the International Space Station, which is near completion.

Under White House orders to explore beyond low-Earth orbit, NASA is hitching rides on Russian rockets to the orbiting laboratory until private companies can provide regular service.

Endeavour is the second of three remaining shuttles to head to its retirement home. In April, Discovery arrived at the Smithsonian Institution's hangar in Virginia. Atlantis, which closed out the shuttle program, will stay in Florida where it will be towed a short distance to the Kennedy Space Center's visitor center in the fall.

Endeavour will remain at an airport hangar for several weeks as crews ready the shuttle for its own road trip. Unlike Atlantis, it will creep through city streets to the California Science Center near downtown.

Some 400 trees will be cleared along the 12-mile route to make room, a move that has riled some residents in affected neighborhoods. Museum officials have pledged to replant double the number of chopped trees.