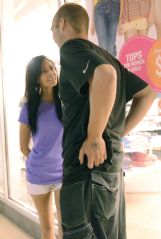 Lance Eisele pulls up his pants while talking to Ezra Du Preez in front of Old Navy on Highway 45 in Columbus Tuesday night. A new city ordinance aimed at sagging pants was passed Tuesday night. Consequences for violating the ordinance will range from $75-$250 and up to 40 hours of community service.
Photo by: Luisa Porter/ Dispatch Staff

The following related files and links are available.

The Columbus City Council Tuesday voted 4-2 to implement a new ordinance aimed at "sagging" or below-the-waist pants. Introduced by Ward 3 Councilman Charlie Box, the ordinance will create a system of fines ranging from $75 to $250 for those found in violation of the law. Although community service may be added as part of the sentence, it does not allow violators to be arrested or incarcerated, unless they do not pay their fines as determined by Columbus Municipal Court.

"I have had many people over the past few months or even year complain to me about young men wearing their pants where they almost touch the ground, and I haven't done anything about it," Box said. "As you remember, about two years ago, (Ward 5 Councilman Kabir Karriem) introduced this and I voted against it because at that time our chief said he was in favor of the ordinance but that it would be almost impossible to enforce. Since that time, Tupelo has passed an ordinance and they don't seem to have had any trouble enforcing it."

"I think the people of Columbus should have some input in this issue," Karriem said. "I would like to set a date for a public hearing."

"Councilman Box brought this to me, and I support a sagging ordinance," Smith said. "We have presented this to our two judges and our court administrator and we have tweaked it. I support the ordinance. I know pastors in the community have mentioned sagging pants to me. When I was an administrator in the schools, I didn't tolerate it. To me, people showing their undergarments doesn't show respect to themselves or to others."

According to Tupelo Municipal Court Clerk Administrator Larry Montgomery, no citations have been written since that city's "sagging pants" ordinance became active in March.

"I am in favor of a sagging pants ordinance as it relates to indecent exposure," Police Chief Selvain McQueen said before the meeting. "This is a hot topic nationwide. In society, when you give some members of the community an inch, they will take a mile. If society gets to the point where they won't tolerate certain things, it tends to subside. Do I think we can enforce this ordinance? Absolutely."

"I did have concerns about an ordinance that regulates dress because the way a person dresses may be a manner of expressing themselves," Turner said. "But this ordinance limits the likelihood that it's an expression of speech."

Sagging pants ordinances have been passed by municipalities across the country over the past few years and have also created a certain amount of controversy. One of the main opponents to sagging pants legislation is the American Civil Liberties Union who issued the following statement on its blog: "The absurdity of turning to the police for sagging pants is just emblematic of a pervasive national issue: overreliance on imprisonment. As a nation, we have spent increasingly exorbitant amounts of money putting people in prison, almost half of which are for nonviolent offenses. What's worse, as the world's largest incarcerator, we have locked up record numbers of individuals with no benefit to public safety."

The ordinances were also a mild campaign issue for then-Senator Barack Obama, who said the following during an interview with MTV in 2008: "Here's my attitude: I think passing a law about people wearing sagging pants is a waste of time. We should be focused on creating jobs, improving our schools, getting health care, dealing with the war in Iraq. Any public official who is worrying about sagging pants probably needs to spend some time focusing on real problems out there. Having said that, brothers should pull up their pants. You're walking by your mother, your grandmother, and your underwear is showing --What's wrong with that? Come on. There are some issues that we face that you don't have to pass a law (against), but that doesn't mean folks can't have some sense and some respect for other people. And, you know, some people might not want to see your underwear -- I'm one of them."

With a motion on the table to pass the ordinance by Box and a second by Ward 6 Councilman Bill Gavin, Karriem made a counter motion calling for a public hearing on the issue.

"This law is only going to be as effective as the officers that enforce it," Karriem said. "Whether the Mayor supports this or nor, I think we should have a public forum on this. We had one when we had the public smoking ban."

Smith then called out Karriem, asking if he had changed his opinion on the ordinance.

"Councilman Karriem, have you changed your mind from two years ago," Smith asked. "Are you against a sagging ordinance now?"

"First of all, this never came before the council, it was from an article in the newspaper," Karriem said. "It was never voted on. But whether I agree or not, I want to give the folks I represent a chance to express themselves."

Karriem's motion failed 4-2, with Ward 2 Councilman Joseph Mickens voting yes for a public hearing, Mickens and Karriem both cast "no" votes on Box's original motion. The ordinance will take effect in 30 days.