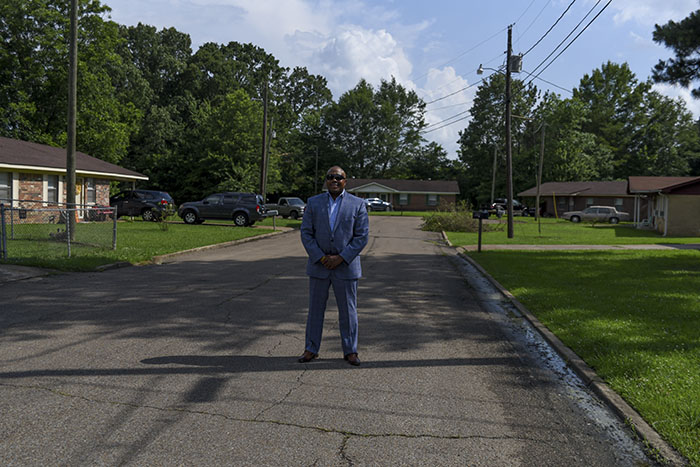 As a child, Rod Bobo and his family moved often, sometimes living in some of the city of West Point’s poorest neighborhoods. Elected on June 8 as the city’s first Black mayor, Bobo said those early-life experiences help him understand the challenges that he’ll face as mayor. Deanna Robinson/Dispatch Staff

The path included a narrow, hard-fought victory in the Democratic primary over Cole Bryan, whose family name has long been associated with the town because of its economic impact and philanthropy.

But the path to history for Bobo is not a short one. It precedes his mayoral campaign and a single term as a city selectman (2009-13). That path was neither direct nor intentional nor was it, at every point, the path Bobo would have chosen for himself.

But in a small city where privilege and poverty and the past and future have always lived in close proximity, Bobo, 48, seems especially suited for the moment and the challenges it represents.

“I knew he was going to be successful in life because of his enthusiasm for obtaining a college education, his self motivation to learn and his work ethic,’’ said longtime contractor David Lott, who hired an 18-year-old Bobo as a favor to a friend of Bobo’s mom 30 years ago. “From the day I met him and put him to work, he turned out to be an excellent, eager and very easily trained member of my team.”

“I don’t think West Point could have elected anybody better than Rod,” said Mike McGill, who hired Bobo as a salesman when McGill was owner of the town’s only new car dealership, Mitchell Automotive. “From day one, Rod was a leader, a top producer, someone who worked really, really hard, was very smart and got along with everybody just great. He worked his way up to sales manager in a very short period of time. He worked for me for 13 years, and he was just excellent.”

In a city where unemployment remains one of its greatest impediments to success, Bobo learned early the importance of having a job.

But there were other lessons he learned at an even earlier age.

“Me and my older brother were raised by a single mom,” Bobo said. “I wouldn’t say we were poor, exactly, but money was tight and there were definitely challenges. We had to move around a lot. In fact, I think growing up I lived in every one of the five wards at one point or another.”

That experience, he said, provided an insight he would appreciate only later in life.

“You don’t think about things like poverty when you are a little kid, but looking back, all of the bad things that are a part of poverty were all around — crime, unemployment, all those things,” he said.

Bobo credits his mom, who kept a tight rein on her boys and stressed the importance of education, as helping him avoid the pitfalls that seemed to swallow up so many of the kids around him.

“I remember that there were these kids in the neighborhood, friends of mine, who would go riding around town on their bicycles at night, just messing around, doing stuff they weren’t supposed to be doing. Nothing real bad, just kids messing around,” Bobo said. “But my mom would never let me go with them. I didn’t know why she was being so strict. But later, I understood.”

Bobo described himself as “a good student” who always planned to go to college.

After graduation, he enrolled at Jackson State just as another challenge emerged, one that often derails the plans of young people.

Thanks to Lott, Bobo landed a job to support himself and his daughter, working summers and Christmas breaks and any time he had a few days off from school at Jackson State, where he attended for a year-and-a-half before transferring to Mississippi State.

“David Lott was such an important person in my life,” Bobo said. “The money I made working for him helped me support my daughter. I’ve never forgotten how important that was. We’ve been friends ever since.”

It was not just an act of kindness on Lott’s part, though.

“He would always let me know when he would be attending school and when he would be able to come back to work,” Lott said. “I always had an opening waiting for him. As a businessman, I tried to surround myself with talented and self-driven employees. Rod was one of them.”

After graduating from Mississippi State, Bobo returned to West Point, eventually going to work for McGill at Mitchell Automotive.

As a salesman, he knew he would be working on commission rather than collecting a steady paycheck. For some, that’s a frightening prospect.

“I loved working on commission,” he said. “The way I saw it, I was betting on myself. I always believed that if I worked hard and had the right attitude it would be a good move.”

In 2009, Bobo ran for selectman but served just one term.

“I really enjoyed it, even though it was just one term,” he said. “At the end of that term, I was transitioning into a new job (as a State Farm insurance agent, a position he still holds today) and felt like I needed to concentrate on that. But even then, I had a pretty good idea that I would get back into city government at some point, although I didn’t think it would be mayor, at least not then.”

When outgoing Mayor Robbie Robinson announced early this year that he would be running for re-election, Bobo felt the time was right.

Running a campaign that focused heavily on economic development, Bobo defeated Bryan by 94 votes in the April 6 Democratic primary. For some, that victory was a changing of the guard, a break from the past. Facing another Black candidate, Homer Ryland Jr., the city was assured its first Black mayor.

When Bobo became mayor elect after the June 8 general election, Bobo embraced the historic significance of the moment. But he saw something else in those election results, something that prevented him from running victory laps.

“I looked at the votes that came in that night and the turnout was low, very low in some wards,” Bobo said.

Indeed, there were 38 percent fewer votes cast (1,974) in a June 8 general election that featured two Black candidates than in the April 6 Democratic primary (3,175).

Many white voters stayed away from the polls. Bobo figures it will be his job to reassure those white voters that while he may be the city’s first Black mayor, he has no intention of serving only the Black community.

“We have a lot of challenges to deal with,” Bobo said. “The only way we’re going to be successful is if the whole city works together. The things I’m working for aren’t for Black people or for white people. When you talk about economic development, educating our kids for the kinds of jobs we want to bring to West Point, dealing with poverty and crime — all of those things affect us all. We all have a stake in those things. So, for me, bringing everybody together is as important as anything I’ll do on the job.”

McGill said Bobo’s background seems to equip him well for the job.

“I’ll go back to when he was in sales for me,” McGill said. “Sales is tough, not everyone can do it. It means sometimes you hear ‘no’ and you have to take it with a smile and keep on working. But more than anything else, in this business it’s about relationships. We don’t want to just sell a person a car and be done with it. We want to sell that person’s family members and friends a car. We want to sell that person another car. You do that by being fair with people, being honest and working hard. Rod showed that over and over. That’s what leaders do. If you have those qualities people will follow you.”

“It was no surprise to me of his political interests,” Lott said. “He loves West Point, and I’m glad that he has become our new mayor. He has vision for the future needs of West Point, past experience on the board of selectmen, the emotional drive, maturity and intelligence needed for this position.”